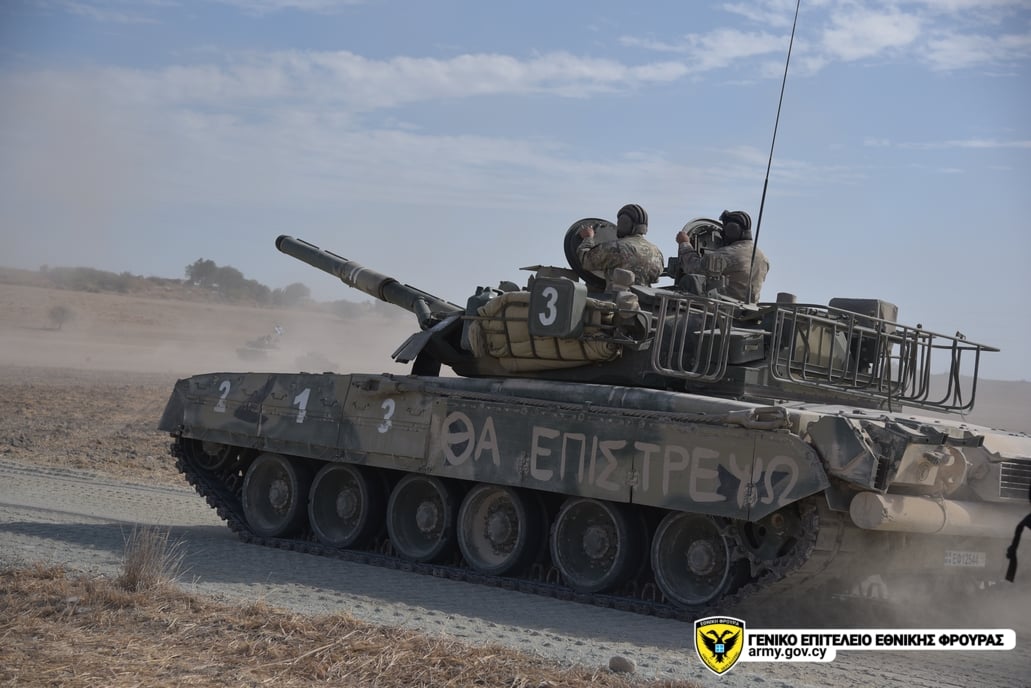 The year 2020 will remain in history as the year in which the COVID-19 pandemic monopolized our daily lives. However, even coronavirus itself was not enough to withhold the operation of the National Guard (N.G), which adapted accordingly and carried out an impressive amount of activities, given its size.

Having said these we present to you our yearly review for the National Guard. Through a large number of activities we selected those which had the biggest impact during the year, a year which, regardless of the pandemic, was also a milestone as the DEFENCE ReDEFiNED year of establishment.

The year of the pandemic…

The coronavirus brought a “new world order” in societies, hence the National Guard’s leadership and personnel was forced to adapt to the new facts. From the beginning of the pandemic, the National Guard did its utmost to support the state’s effort to fight the spread of the virus. The action of the Armed Forces was twofold, since, first, it had to protect its personnel, shaping a new routine inside the army camps, but also to go out on the streets, assisting the Cyprus Police with personnel in supervising the implementation of the measures (decrees).

Also read: National Guard and COVID-19 | The assessment of the situation and the classification plan of the new recruits of 2020 Class

In 2020, we saw the National Guard implementing strict protocols to stop the spread of the pandemic, to cancel reservists’ routine activities, to monitor quarantine areas, to patrol the streets and be innovative by digitizing most of the procedures for the classification of the 2020 class of recruits.

In retrospect, we can say that, despite the Covid-19 infection cases that occurred in camps and also the ones found among high-ranking officials, the N.G has so far handled the situation in an exemplary manner and did not let things “go south”. As a plus we also note, the activation of the special Radio-Biological-Chemical Warfare team, which was in charge of disinfecting the military premises where COVID-19 cases occurred.

First time without an audience..

Also read: “We are still far from Kyrenia” The last Daily Order of Elijah Leontari

The Professional Soldiers’ recruitments and this year’s fiasco…

The fiasco with the intention of granting a temporary postponement of service to hoplites of the 2020 class, for the purpose of studying in the United Kingdom following the recruitment of Professional Soldiers to fill the resulting gap, dominated the headlines for a number of days.

Also read: The scenario for a temporary postponement of service and the budget for Professional Soldiers was not clarified

The debate in the Parliament revolved around the sloppiness with which the government handled the whole issue as well as the degree to which the National Guard will be weakened since, as was said, conscripts perform almost 20 night duties per month, while the Professional Soldiers around 6.

It was also strongly commented that the taxpayer will bear the cost of the government’s decision to grant suspensions, as this provided for the recruitment of additional Professional Soldiers.

The House of Representatives, however, voted against the supplementary budget and thus the approximately 500 additional positions for Professional Soldiers were not announced, nor were temporary adjournments granted to hoplites of the 2020 class.

The Ministry of Defence announced in December new positions for Professional Soldiers in order fill only the vacant positions. The announcement concerns about 100 positions and the candidates are expected to join the ranks of the National Guard in the first months of 2021.

Hundreds of promotions to Officers and Non-Commissioned Officers (NCO’s) took place in 2020, following the latest trend dating back 3 years, after the adoption of the new regulations concerning Officers and NCOs.

Also read: Dozens of new promotions for the Cypriot Army

Regarding the Non-Commissioned Officers, the promotion process started in January 2020, whereas the evaluations for promotions took place in February. In March, a request was sent to the Finance Committee of the Parliament to release the positions for promotion and on May 20, the lists with the promoted NCOs were announced. The coronavirus delayed the entire process, which was due to be completed in March, but the non-commissioned officers were promoted in September.

From the beginning of 2020, the National Guard aimed to enhance its arsenal. Specifically, Cyprus ordered the French made man-portable air-defence system (MANPADS), Mistral 3, as well as the Exocet Blk 3c coastal defence system, with a total cost of 240 million Euros, as published by the French La Tribune.

The armaments program was part of the National Guard’s broader operational capability upgrade and various contracts were signed to upgrade specific weapon systems.

In addition, in 2020 the receipt of the 24 Serbian Nora B-52 howitzer guns ordered by Cyprus in 2017 was completed. The final pieces of this weapon system arrived in Cyprus with secrecy and security.

In 2020 the National Guard was really restless. The pandemic may have canceled some planned exercises, but the Armed Forces have participated in several multinational exercises, conducted a series of tactical exercises with troops and dozens of operational and training activities on land, sea, air and cyberspace.

We begin with the multinational exercise “EUNOMIA”, in which forces from Greece, France and Italy participated in the Eastern Mediterranean region.

The next big multinational exercise was “MEDUSA-10”, which was conducted with the participation of Egypt, Greece, France and the United Arab Emirates. Cyprus participated with the offshore patrol vessel (OPV) “IOANNIDIS” P61, but also a  special forces team.

Apart from that the multinational exercise “NEMESIS 2020” was performed for the 7th consecutive year. “NEMESIS” is part of the preparation of all the government services involved in the implementation of the energy program of the Republic of Cyprus in order to tackle any emergency on a hydrocarbons drill platform.

The National Guard also took part in transnational military exercises, as the yearly exercise with Israeli Air Force named “ONISILOS – GEDEON 2020” and the joint training of Special Forces and Underwater Demolition Commands with their respective Special Forces from the United Kingdom and the United States.

The National Guard, by applying (as far as possible) the doctrine of multi-domain defence, took part for the third time in an cyberwarfare exercise codenamed “PANOPTIS 2020“. “PANOPTIS 2020” was held with the participation of the Cyber ​​Defence Company of the National Guard and around 100 teams from Hellenic Armed Forces Commands, Public and private sector organizations and the academic community from Greece and Cyprus. 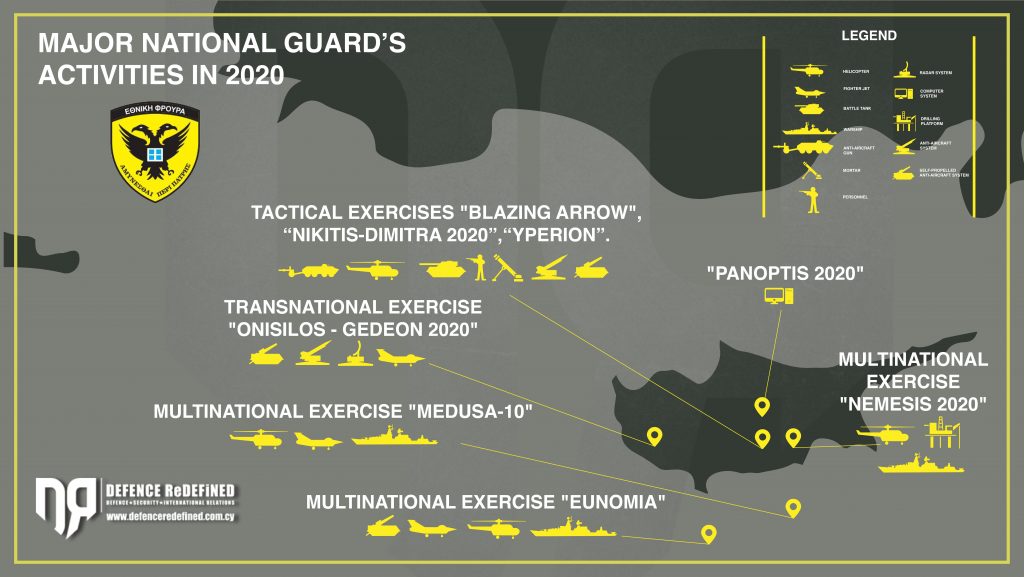 Social contribution of the National Guard …

To all the above we add the social contribution of the National Guard which was called to assist in the transfer of supplies to the people of Lebanon, after the catastrophic explosion in Beirut on August 04. In addition, throughout the year blood donations and other voluntary activities such as the Volunteer Week took place across the National Guard’s camps.

Summing up the 2020 assessment, we consider that the work of the National Guard was successful. Despite the well known shortcomings and problems that exist, mainly in means and personnel, the N.G managed for another year to accomplish its multifaceted task.

A task, which the National Guard members (professionals, conscripts and reservists) are called upon to carry on their shoulders daily, regardless of the day and time, celebrations or holidays, because the benefit of security and love for the homeland is priceless, probably the most beloved institution of our society.