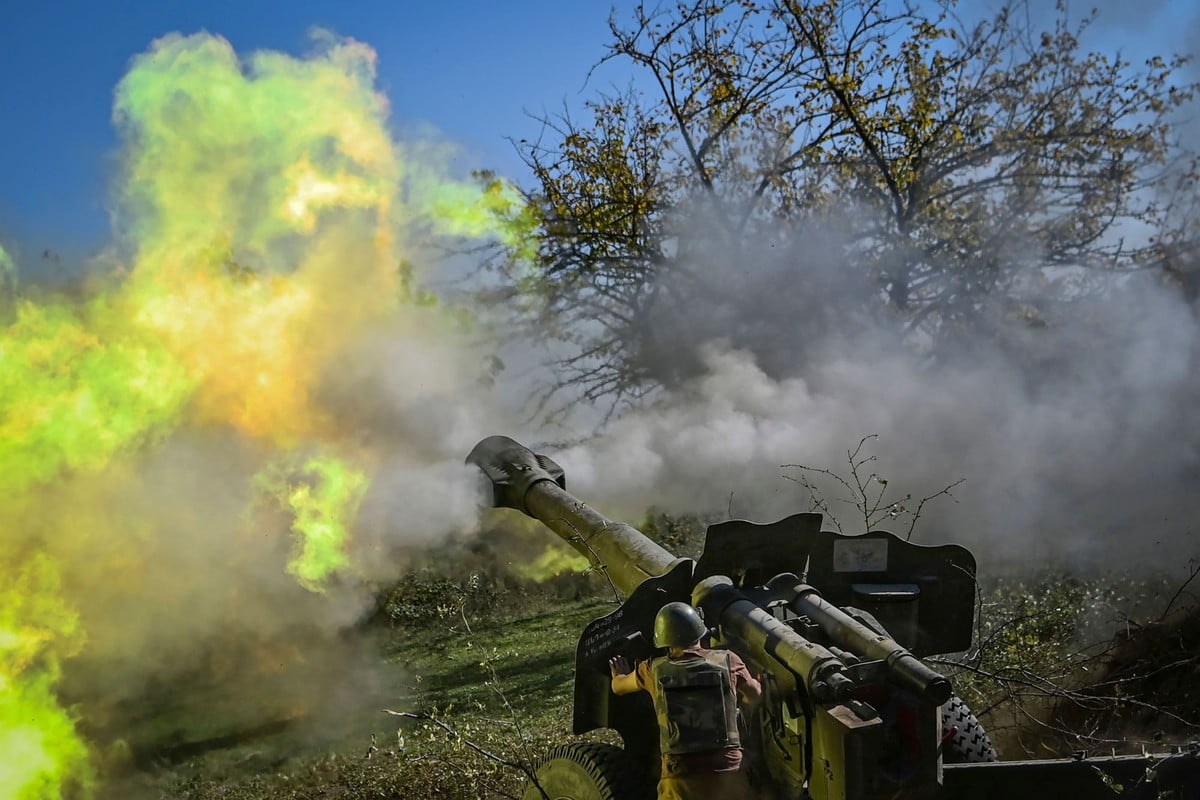 The year 2020 will be an unforgettable year for humanity. The main event of the outgoing year started in 2019, continued throughout 2020 and afflicted the entire planet. The SARS-CoV-2 pandemic, also known as COVID-19, came into our lives, bringing radical changes and now we all follow the government decrees hoping for our lives to go back to normality.

Unfortunately, apart from COVID-19, the wars that took place or continued in 2020 are also noteworthy. Thousands of dead, hundreds of devastated cities and hundreds of thousands of refugees dominated the international press during 2020.

There are many reasons which could give rise to armed conflicts. These include territorial differences, religion, nationalism, civil strife, revolutions but also natural resources and the consequent benefit of exploiting them.

Also read: Ambassador of Greece | The determination of the EEZ, the Cyprus issue and the possibility of a serious security incident | VIDEO

According to the statistical service “Statista”, the following map shows the countries that participated in armed conflicts in 2020: 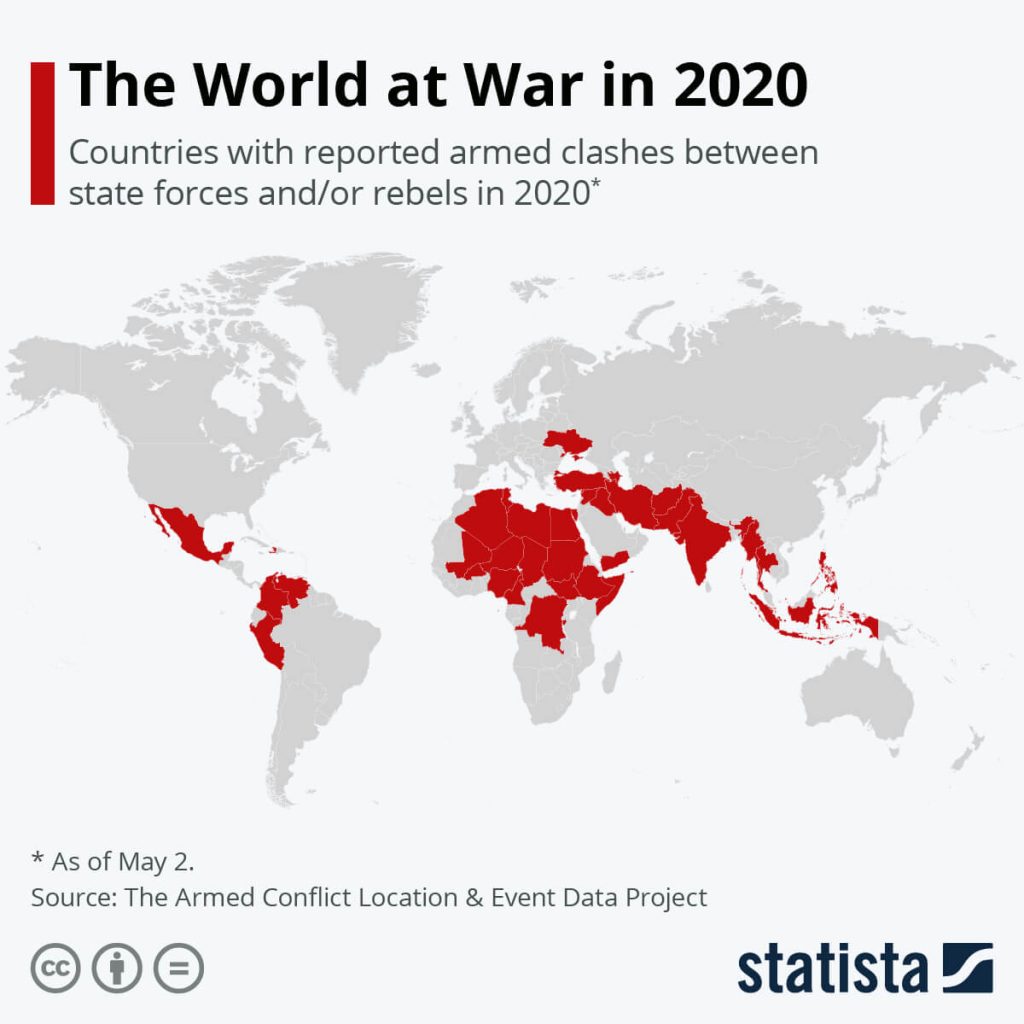 The war in Afghanistan began in 1978. The current phase of the war began in 2001 when the United States invaded Afghanistan to oust the Taliban. Allies from around the world took part in the conflict, but the main force was US troops and their allies along with Afghan troops against Taliban insurgents. In 2019 alone, more than 41,700 deaths were recorded. In 2020, the number of registered deaths exceeds 19,000. The war in long-suffering Afghanistan continues unabated between the Taliban and government / NATO forces.

The Yemen civil war began in 2015 between the Yemen government led by Abdrabbuh Mansur Hadi and the Houthi armed movement, Ansar both claiming the control and governance of Yemen. Saudi Arabia following the ousting of Abdrabbuh Mansur Hadi intervened – as the leader of a nine-nation coalition coming from Asia and West Africa – in support of the Hadi government against the Houthis.

The death toll from Yemen’s civil war in 2019 was 20,000 people, while in 2020 almost 19,000 people lost their lives. Today, war is raging daily across the line of confrontation between the Houthis and coalition forces.

The ongoing Libyan civil war began in 2014 and is raging mainly between the Libyan House of Representatives backed by the Libyan National Army (LNA) and the United Nations-recognized government, the Government of National Accord (GNA). Nearly 42,000 people have died since the outbreak of the war, with more than 2,200 deaths in 2019 and 1,489 in 2020. The situation in Libya today can be described as “stable”, as there have been no large-scale armed clashes in recent months. Yet, the ceasefire between the warring parties is fragile.

The Syrian civil war, launched in 2011, is the second deadliest war of the 21st century. The civil war in neighboring Syria is an ongoing conflict between the Syrian Arab Republic led by Syrian President Bashar al-Assad, backed by domestic and foreign allies on the one side and various paramilitary organizations and foreign forces backed by Turkey and western allies on the other. In total, it is estimated that about 586,000 people have been killed since 2011, while in 2020 alone 7,633 lost their lives.

Today, the situation in Syria is described as tense, as the re-emergence of Islamic State has sparked new clashes in the country’s central desert. In addition, clashes are taking place in northern and northeastern Syria, where paramilitary organizations are active, with Turkey as its main supporter.

The resurgence of the Nagorno-Karabakh conflict began in 2020, between Azerbaijan – which was backed by Turkey – and the self-proclaimed Republic of Armenia – backed by Armenia – in the disputed region of Nagorno-Karabakh. It was the latest and most serious escalation of a multi-year conflict in the region, which is internationally recognized as part of Azerbaijan, but is partly governed by the Republic of Artsakh by ethnic Armenian majority.

This bloody conflict began on September 27 and ended on November 10 with the capitulation of Armenia and Azerbaijan after Russia’s intervention. The capitulation was essentially an acknowledgment of the defeat of the forces of Artsakh and Armenia and the loss of the territories they had occupied since 1990. In the 42 days of war, the death toll rose to 6,509 people.

Nowadays, following the signing of the ceasefire and the capitulation of Armenia, Russian peacekeepers are deployed in Nagorno-Karabakh to monitor the implementation of the ceasefire. Apart from some small-scale conflicts, the situation is described as stable.

The conflict in Ethiopia’s Tigray province is an ongoing armed conflict that resurfaced in November 2020 between the Tigray regional government led by the People’s Liberation Front (TPLF) and the military alliance between Ethiopia’s National Defense Force (ENDF) and President Isaias Afwerki’s Army.

Today, despite the great progress of the National Defense Forces of Ethiopia, in the territory of Tigray’s province, the war continues. So far 1,500 people have lost their lives.

Beginning in 2006, the Mexican theater of the war on drugs cost the lives of tens of thousands of people. It is a relatively low-intensity clash between the Mexican government and several paramilitary drug trafficking groups.

In 2003, the United States, along with the NATO alliance, invaded Iraq and overthrew Saddam Hussein’s government. US troops withdrew in 2011, but returned to Iraq in 2014 as insurgencies and civil strife continued. Total deaths are estimated at between 650,000 and 2.4 million.

Also read: Iraq | Eleven killed in IS attack near Baghdad

In 2019, more than 2,000 people were killed. In 2020, 2,493 people lost their lives. Today, in addition to paramilitary groups clashing with the Iraqi government, Islamic State fighters have a strong presence in the country. 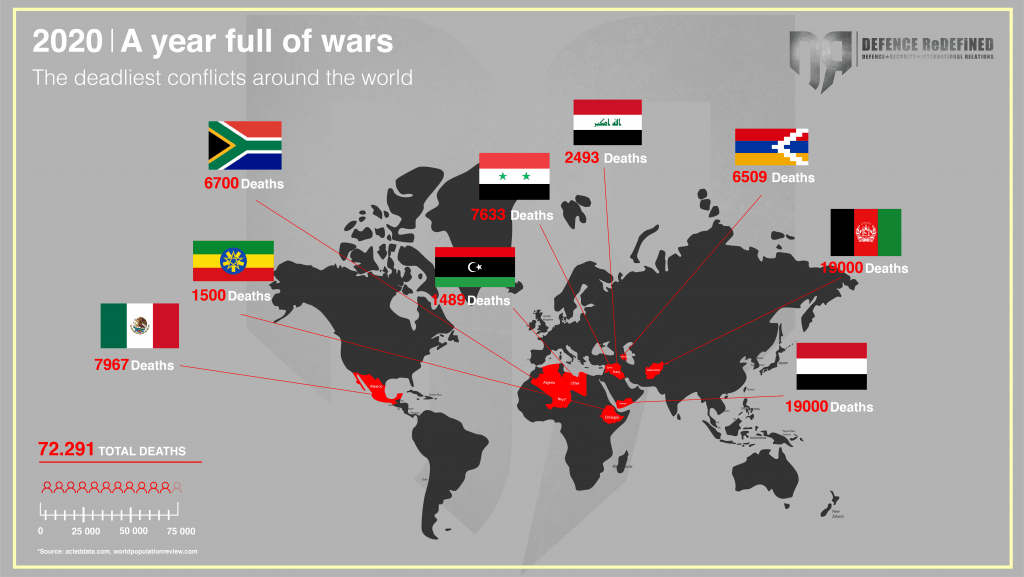 The common denominator of these countries, with minor exceptions, is mainly the low standard of living, poverty but also the national-religious fanaticism that governs large groups of militants. Western intervention, of course, further exacerbated the conflict by arming governments and paramilitary groups with technologically advanced weapons. Russian intervention can also be observed at high levels. In several African countries, Soviet-era weapons dominate, while Russian “mercenary” companies are involved in civil strife.

We wish that 2021, as utopian as it may seem, will be a year where international journalism will not be spent on the death toll or injuries caused by armed conflicts and the use of force.