Ambassador of Greece | The determination of the EEZ, the Cyprus issue and the possibility of a serious security incident | VIDEO
Defence Redefined
Published on 17/06/2020 at 10:41 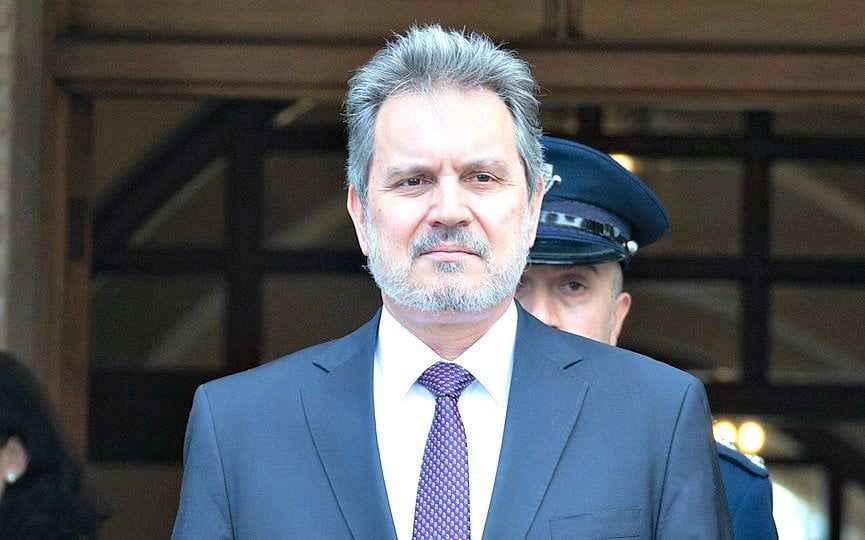 Determining an exclusive economic zone (EEZ) between Greece and Egypt is a complex process, with many political and legal parameters, but there is room for optimism, says Greek Ambassador in Cyprus Theocharis Lalakos.

In an interview to the Cyprus News Agency, the Greek Ambassador referred, among other things, to the forthcoming visit of Greek Foreign Minister Nikos Dendias in Cairo for the talks, stressing that any agreement between the two countries would be a “clear and legitimate response” to illegal Turkish-Libyan memorandum. The definition of an exclusive economic zone (EEZ) between Greece and Cyprus has consistently been part of the agenda of the talks between the two countries, he notes.

Asked to answer whether there is a risk of a serious security incident in the region, Ambassador Lalakos expressed hope that logic would prevail in Ankara, for the sake of maintaining normal relations with Athens.

Asked about the Cyprus issue, he said that the provocative behavior of the other side, both at sea and on the ground, “does not create the right conditions for substantive negotiations,” but the Ambassador expresses hope that in the future prudence and compromise will prevail.

Regarding the recent signing of the agreement on the delimitation of maritime zones with Italy, Ambassador Lalakos notes that this is the first agreement in the history of Greece that includes the definition of EEZs. This agreement is very important because it confirms, on the one hand, the right of the islands in maritime zones and, on the other hand, the middle line of the 1977 Greece-Italy agreement on the delimitation of the continental shelf of the two countries, he says.

“I would like to emphasize that this agreement is a model for understanding and resolving outstanding bilateral disputes between the two countries, always within the framework of international law and good neighborly relations. It is a practical proof of Greece’s commitment to delimiting the maritime zones with all our neighbors, in accordance with the relevant provisions of the law of the sea and, in particular, UNCLOS” of the United Nations Convention on the Law of the Sea, says the Ambassador.

Regarding the agreement of EEZ between the Hellenic and Cypriot Republics, he says that this is an issue that is constantly part of the agenda of the two countries’ discussions. This, he continues, has recently been confirmed at the highest level by both Athens and Nicosia. “However, in the demarcation of maritime zones, especially in a maritime area such as the Eastern Mediterranean, there is a necessary sequence of actions. An agreement was recently reached with Italy. The next step, as we have said, will probably be with Egypt,” he said.

Following the Turkish-Libyan memorandum signed last November, Ankara is pursuing its plans for research, in an area south of Rhodes and as far as Crete, while a request from the Turkish State Oil Company (TPAO) was recently published in Turkish gazette. Asked about Athens’ readiness to respond, in case Turkey escalates the challenges, the Ambassador said that the Greek Constitution does not leave the slightest room for the Greek government to grant national rights.

“National rights cannot be negotiated. This is absolutely clear and is understood by all our international partners. For its part, Turkey is wrong if it believes that through pressure, Greece will back down and accept positions that are to the detriment of its sovereign interests,” he said.

Regarding the possibility of a serious security incident, he replied that Greece is ready for all scenarios, but he expressed hope that “in the end logic will prevail in Ankara and it will be understood that maintaining normal relations with Greece is in its interest.”

Asked how Athens could assist Nicosia’s efforts to end Turkish drilling in the Cyprus EEZ, Theocharis Lalakos referred to the actions being taken at European Union level. “Greece, in full co-operation and co-ordination with Cyprus, has contributed to important EU decisions condemning Turkish provocation and delinquency in the EEZ of the Republic of Cyprus, both at the level of the European Council and the Council on Foreign Affairs, while “as you know, a first step has been taken on the issue of EU sanctions against Turkey,” he said.

Similar coordinated action has taken place in capitals of important third countries, while at the regional level, through their participation in the tripartite cooperation groups, Greece and Cyprus have increased their diplomatic bases, he notes.

Also read: The agreement on the demarcation of maritime zones with Italy is signed

The Greek Ambassador also referred to the visit of the Prime Minister of Greece, Kyriakos Mitsotakis, in Israel, as well as the one of the President of the Republic, Nikos Anastasiadis, which will take place in a few days, saying that “they are both a practical proof of the added value of the tripartite group.”

In both visits, the issue of Turkish provocation in the eastern Mediterranean – whether it is TRAO’s recent move to apply for a hydrocarbon exploration permit, or Turkey’s illegal drilling in the Cyprus Sea – is expected to be one of the key issues of the discussions, he notes.

Regarding the Cyprus issue and the analysis of Athens for the current period, almost three years after the collapse of the talks in Crans Montana, Ambassador Lalakos notes that the solution of the national problem is a top priority of Greek foreign policy. “Greece strongly supports the efforts of the Government of the Republic of Cyprus for a just, balanced and sustainable solution, based on international law, UN decisions and European Union law,” he said. In this context, he continues, Athens positively welcomed the meeting of Berlin on November 25, 2019 and, since then, it remains ready and available to assist the UN Secretary General, Antonio Guterres, in his efforts to resume the negotiation process.

At the same time, the Ambassador of Greece notes the readiness of Athens to guard the integrity of its borders, as it did in Evros since last February and beyond. “As the most skeptics saw, Turkey, violating all the rules of good neighborliness, proceeded with an organized plan to destabilize Greece, but also the whole of Europe, with the vehicle of migratory flows to our land borders. He sent tens of thousands of persecuted people to Greece, demanding compensation and blatantly violating the Joint Declaration with the EU,” he said.

“Greece and the EU have not accepted this situation. We have protected the integrity of our country, guided by the security of the European Union, by moving within the framework of international and European law. Greece has proved that it can successfully defend its rights with a weapon of its legitimacy and determination. Greece is ready to do the same with the same confidence in the future, if necessary,” he notes.