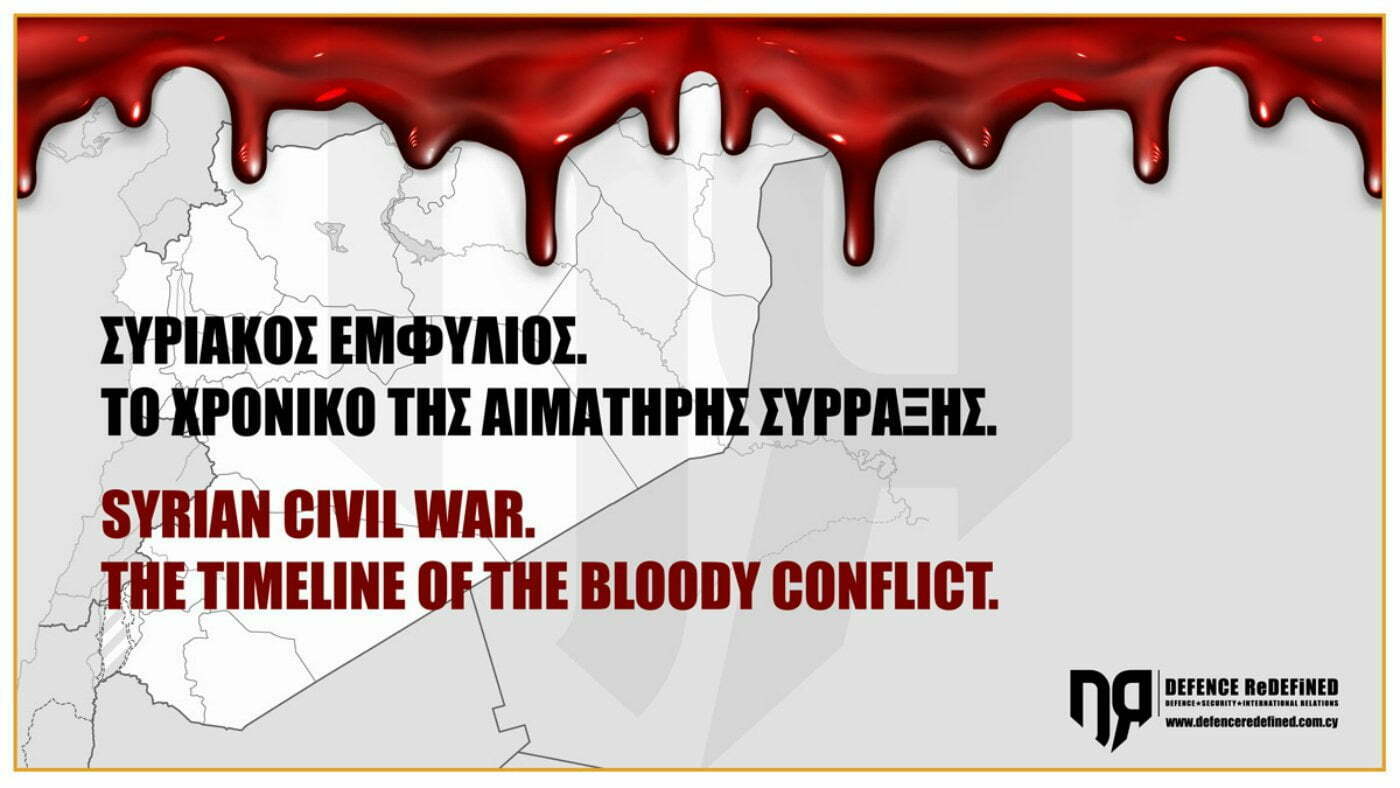 The Syrian civil war is rightly described as one of the most complicated, if not the most complicated, wars in modern history, with the involvement of various nations and a number of paramilitary and terrorist organizations. The protagonists of this war, which has been raging since 2011, are so many – and some of such a range – that many international relations experts and observers have described it as a “mini world war”.

Below we briefly present the timeline of the main events of this bloody conflict, aiming at a simplified first approach on the matter.

The spark that ignited the civil war was the violent suppression of the protests by the command of the country’s President Bashar al-Assad to all the citizens who tried to demonstrate against the regime influenced by the “Arab Spring”, originated in Tunisia and then in Egypt and Libya. 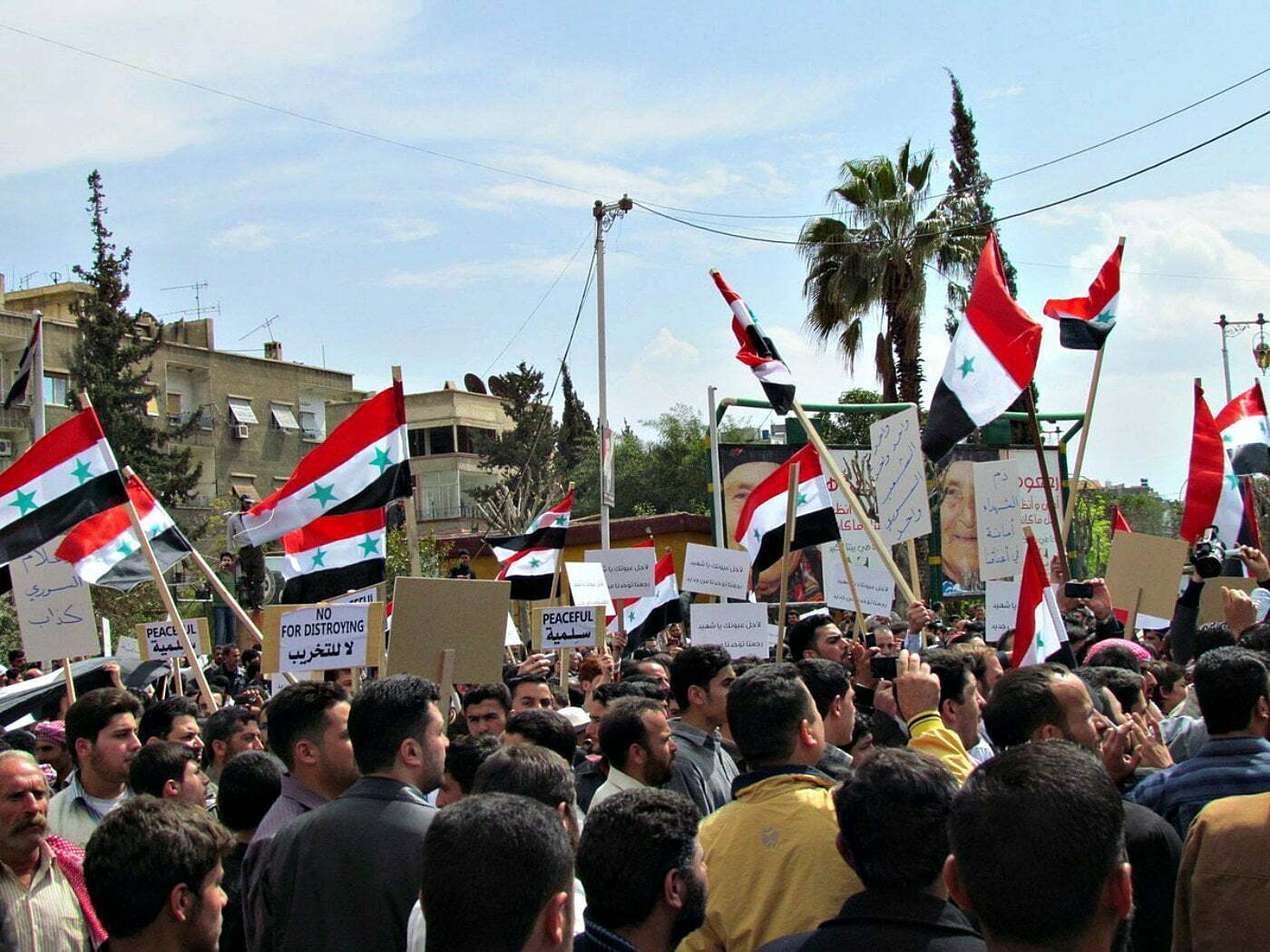 But this incident alone was nothing more than the mere cause of the long civil conflict. The different religious identity of the government with the majority of the country was one of the most important factors that advocated separation and ultimately conflict. Supporters of the Assad regime, as well as all pro-government groups, are Muslim Shiites or Alevis, while the population of the warring groups in the provinces bordering Turkey is mostly inhabited by Sunni Muslims.

In the already tense situation, the involvement of various states was added which, primarily serving their own interests, turned the civil war into a regional conflict via proxy war by providing equipment to the warring parties or by direct military involvement such as the Russian Air Force’s bombings in favor of the Assad regime.

Bashar al-Assad’s regime enjoys the support of Russia, Iran and the Hezbollah paramilitary organization (which appears on the US list and most recently on the list of Germany and other countries as a terrorist organization).

Opposition militias are mainly backed by Turkey, Qatar and several Western countries, which have sharply accused President Assad especially of using chemical weapons against civilians, in August 2013, something that the regime and his allies refused. 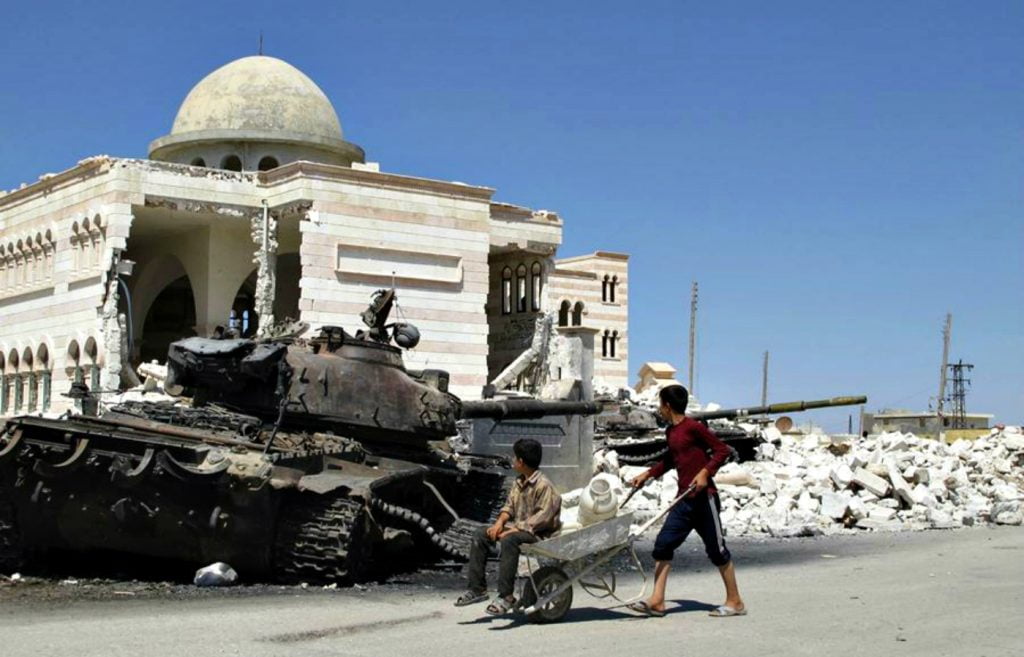 Although Israel does not “officially” participate in the Syrian civil war by taking a stand in favor of any of the warring parties, it has not hesitated to carry out (and continues to carry out) multiple Air Force strikes on Iran’s Islamic Revolutionary Guard Corps and Hezbollah, on the pretext of its vital interests being threatened.

The jihadist terrorist organization ‘Islamic State” or ISIS (which originated in Iraq) has found suitable ground for its involvement, taking advantage of the chaotic situation in Syria. Al-Qaeda joined the conflict as well, thus Assad’s government was fighting against all: ISIS, Al-Qaeda and the then-newly formed Free Syrian Army (FSA) which is the parent group of many other sub-groups of the oppositionists (rebels).

Map of Syria showing the changing areas of the various forces fighting in the country 2011-2019. © Alexpl

The Kurdish forces played a decisive factor in the battle for Kobanî’s recapture from the fighters of the Islamic State between January 26-02 February 2015.

Kobanî was fully liberated from the Islamic State around the end of July 2015. 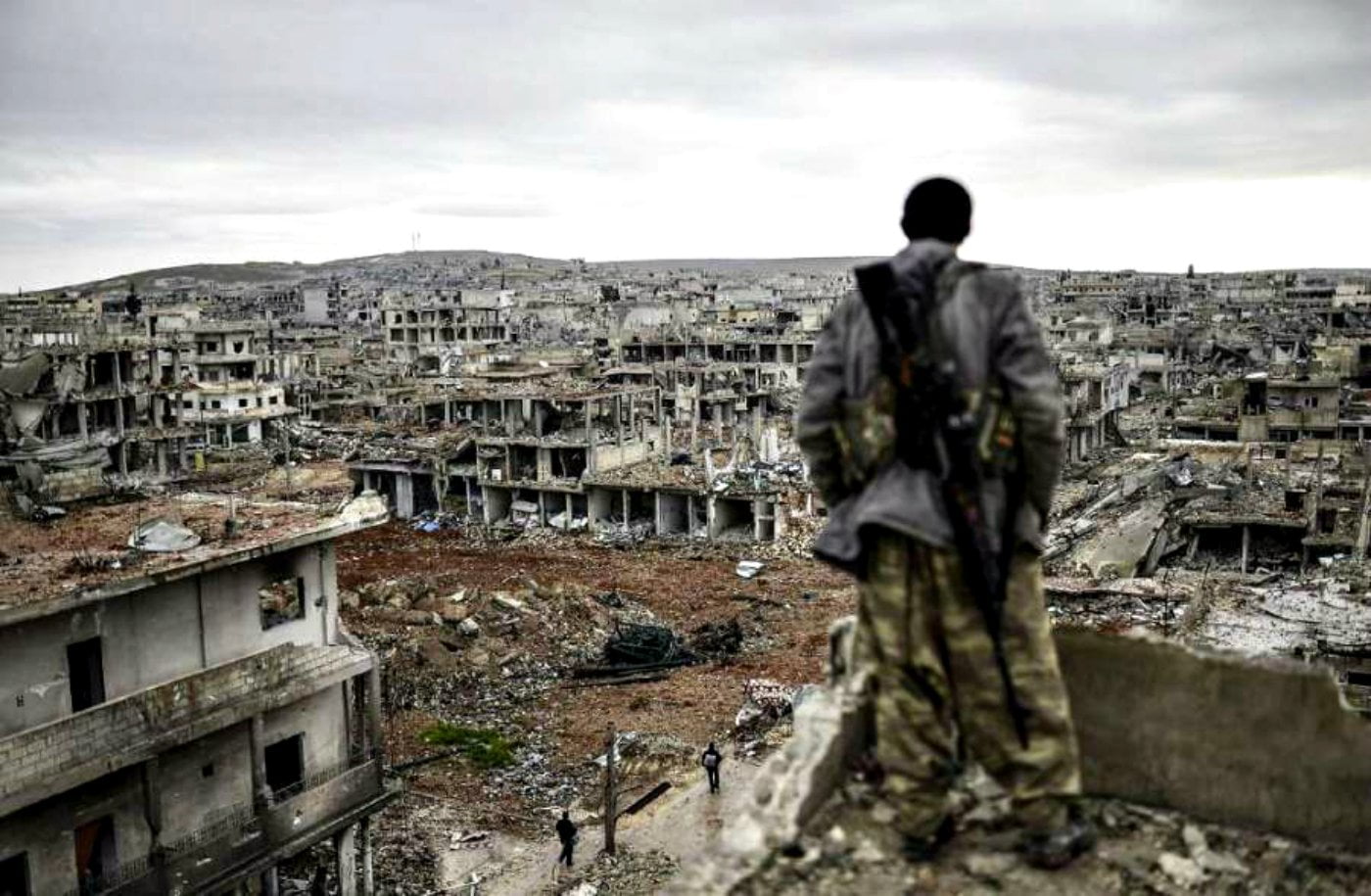 A landmark victory for the Assad regime is the recapture of the city of Aleppo by the opposition in 2015. This success is largely due to the aid received from Iran, the paramilitary organization Hezbollah and Russian air cover. Particularly significant in terms of the assistance from Iran was the involvement of Major General-Commander of the Iran’s Islamic Revolutionary Guard Corps Qasem Suleimani (who was later killed by the Americans in Iraq on January 3, 2020).

On December 20, 2015, after heavy losses, the Syrian Arab Army managed to regain part of the M5 highway, which is considered strategically important as it connects Damascus with Aleppo and stops the passage of the opposition. Until February 3, 2016, the eastern side of the M5 motorway came under the occupation of the regime.

Blue the M5 highway – with the red road M4 © iswresearch.

Turkey’s involvement in Syria until early 2020

Turkey’s involvement in the Syrian civil war began in early 2011, when Ankara directly accused President Bashar al-Assad of escalating the conflict. In addition, he encouraged the creation of the FSA in July of that year. In addition, it is widely known to work with ISIS in terms of providing equipment and smuggling oil.

Turkey’s military offensive on Syrian soil began in 2016 with Operation “Euphrates Shield” against ISIS and the YPG, which the Turks consider a terrorist organization. This was followed by Operation “Olive Branch” in 2018, with the capture of the city of Afrin after fierce battles with Kurdish fighters.

In 2019, Turkey launched a new operation against the Kurds in northern Syria, known as the “Source of Peace”, which aimed to create a “security zone” inside Syrian territory and relocate 2,000,000 Syrian refugees there. On October 9, 2019, during the first day of the operation in question, Turkey bombed Kompany, which, however, the former failed to take over.

The result of the “Source of Peace” was the occupation of the border towns of Tel Abyad and Ras al-Ain, while the primary goal was to occupy the whole of northern Syria at a depth of 30 kilometers from the Turkish border in order to create the aforementioned “security zone”. 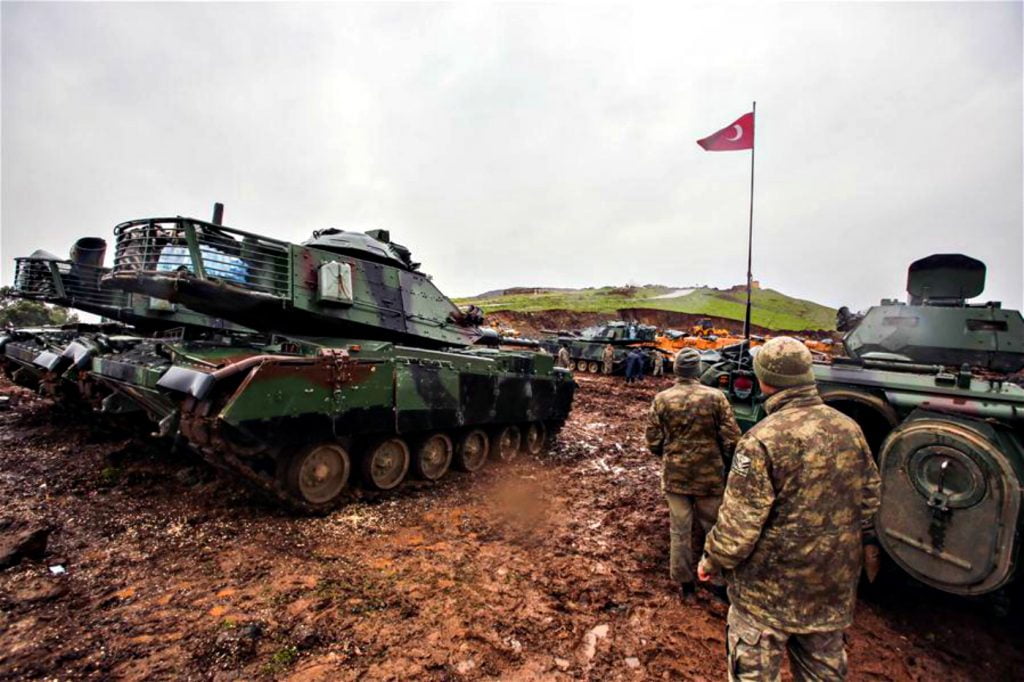 The president’s regime, as early as 2018, had launched a major counterattack to regain lost ground in both the opposition and the Islamic State. Within months, the Syrian Arab Army, with the help of Russia and especially the Air Force, which was relentlessly bombing jihadists and opposition fighters, managed to regain most of the country. However, important areas, as shown in the graph, remain under the control of the opposition and the Kurdish SDF (Syrian Democratic Forces). 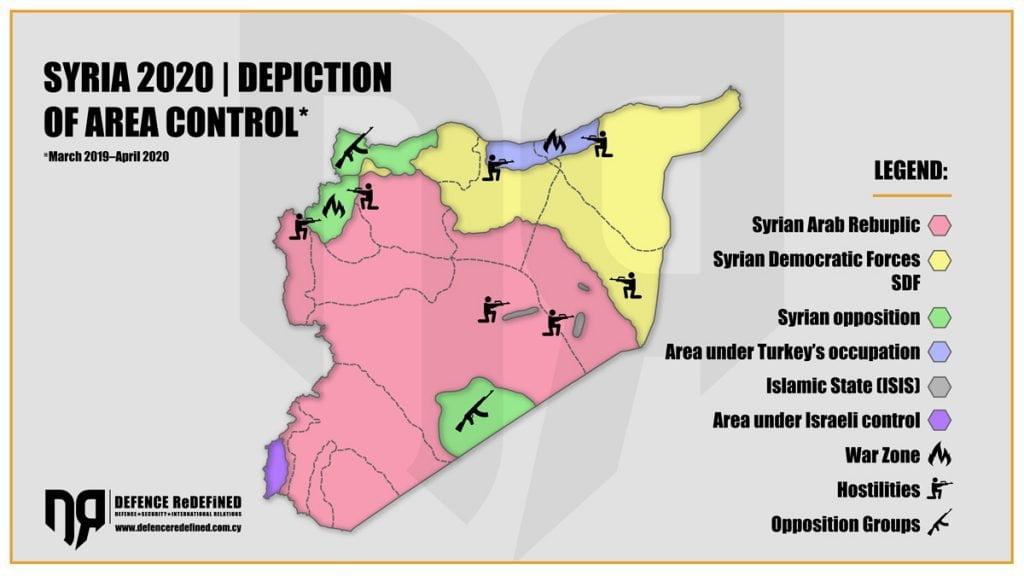 The SDF forces, which control oil-rich territory in Syria’s northeastern regions, are not a target (at least for now) for the Assad regime. In contrast, last November, the Syrian Democratic Forces and the Assad regime allied themselves to counter the Turkish invasion of northern Syria.

In recent months, the regime has launched a new offensive against the last rebel stronghold, Idlib Province. In February 2020, the Syrian Arab Army managed to retake much of Idlib province, managing to take control of the entire 450-kilometer M5 strategic highway.

In addition, Assad’s forces managed to repel the opposition from western Aleppo and liberate most of the province.

Of strategic value to the Assad regime was the capture of the city of Sarakeb, just a few kilometers from the eponymous capital of Idlib Province.

These decisive victories of the Syrian army forced Turkey to openly support the opposition and to launch a direct military confrontation with Assad’s forces, inflicting heavy casualties on them with the widespread use of Unmanned Aerial Vehicles (UAVs) and electronic warfare (ew) systems . Turkey’s involvement was not without cost, as the loss of personnel and equipment from the bombing of Assad’s forces (and perhaps their allies, as rumor has it) mainly affected its reputation.

The dangerous escalation between the Assad regime and Turkey has led to a ceasefire agreement between Ankara and Moscow regarding the ceasefire regime along the existing line of contact in the de-escalation zone in the Idlib region of the joint Russian-Turkish border on March 05.

The “total resumption” of the regime’s forces, according to experts, will be the gravestone of any attempt to politically resolve differences between the warring parties, despite Moscow’s and Turkey’s declarations of political settlement, which the Syrians themselves will adopt and implement according to UN Security Council Resolution 2254.

Previous diplomatic efforts, particularly the Astana agreement in May 2017 between Turkey, Iran and Russia, provided the establishment of four “de-escalation zones” in war-torn Syria, in an effort to reduce violence in the country, which has killed 400,000 people and refugee of almost half the country’s population. 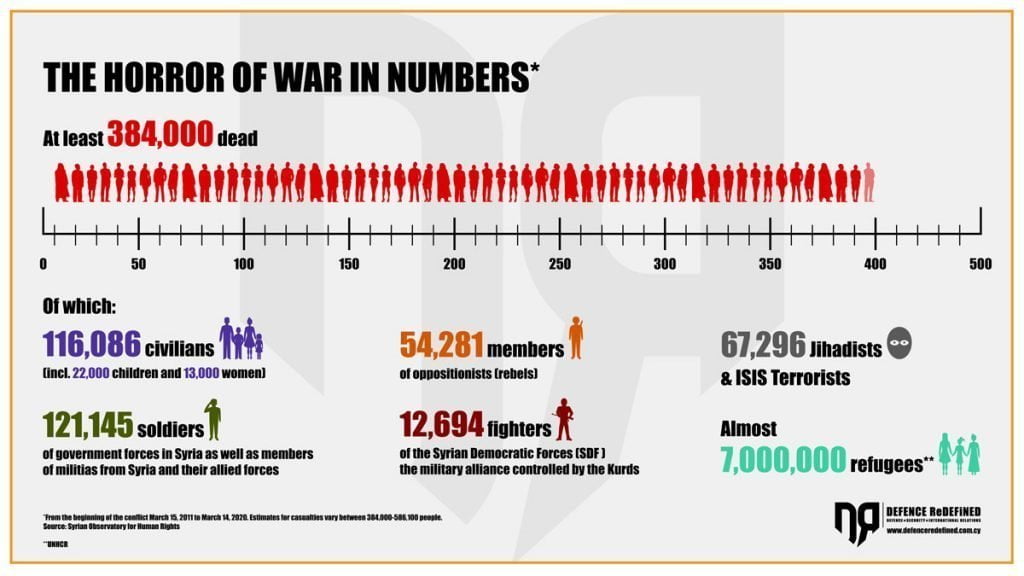 The European Union (EU) has failed to play a significant role in trying to bring peace to the warring parties, as it has made the removal of Assad a condition that the regime and its allies do not accept. In addition, it does not have any military power in the region, and any sanctions imposed on Turkey regarding the ban of armaments by EU countries are ineffective, as the Turkish Defence Industry covers about 70% of the country’s defence needs. The agreement with Turkey on “containment” of migration flows from Syria to Europe puts the EU in a state of “control” and essentially “blackmail” by Turkey.

The big loser in the diplomatic chessboard is undoubtedly the United States which, following President Trump’s sudden decision to withdraw from Syria and not support the former Kurd “allies” against Turkish aggression, essentially left Russia alone to determine developments. Characteristic is the recent report by the US Special Envoy for Syria, James Jeffrey, who called for the withdrawal of all forces from Syria except Russia.

Now after  March 05 2020 and the ceasefire agreement, the warring sides once again measure their wounds with the future seeming bleak, at least in the eyes of the civilian population.

The DEFENCE ReDEFiNED team will monitor developments and keep you informed of the latest developments.