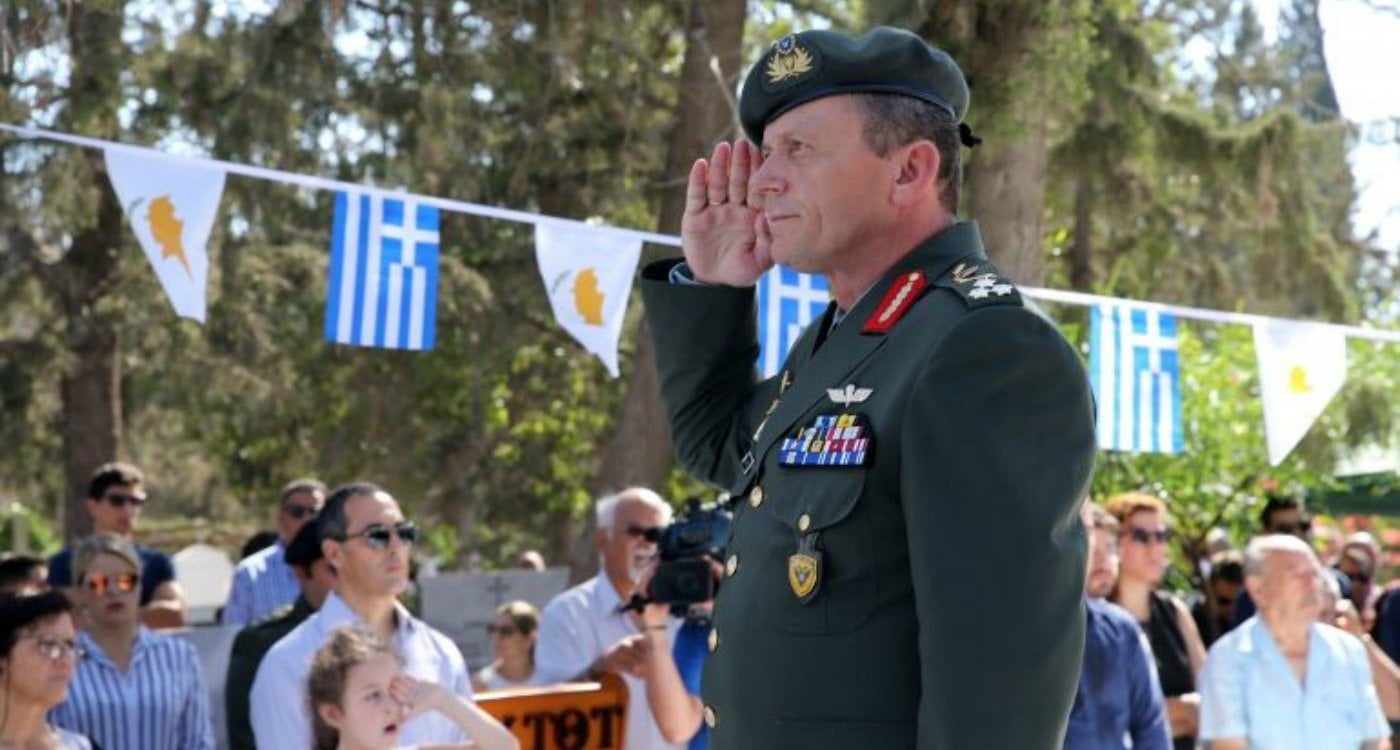 In his moving speech, the Lieutenant General addressed the National Guard’s personnel including the members of the reserve forces, thanking the Greek and Cypriot authorities and the various associations for their cooperation during his three-year service as the Chief of the National Guard.

Below we quote a translation  of the last Order of Lieutenant General Elias Leontaris:

“Officers, Non-Commissioned Οfficers, Soldiers, Sailors, Airforce men, members of the Reserve forces and Civilian Personnel of the National Guard, today my service as Chief of the National Guard ends, I return home and in a few days I will return to private life after nearly 43 years of service.

In my Order, the day I took office, I set out my goals and with my operational guidance I analyzed how to accomplish those goals.

We have come where we are today because of the work done by our predecessors and with the work you created.

This work is familiar to you and our political superiors who are part of the responsibility for completing the reorganization or better the transformation of the National Guard.

This work has been felt, supported and embraced by the Cypriot society.

I do not overlook that there are and will continue to be people who will criticise us.  They are welcome.  They help us improve.

The operation of any organization, such as the National Guard, is a constant process of evolution. I deliberately use the term ‘Evolution’ to highlight the need to constantly adapt to the requirements of the present and the need to anticipate and evaluate developments in the future, to prepare and absorb new data.

We are used to giving a title to every period, either to emphasize its complexity and challenges, or to describe the difficulties that characterize it.

For us, irrespective of  the title of the period, what matters remains the same.

We have been living in the same status for forty-six years, with 36% of the territory of the Republic of Cyprus under occupation, the Turkish threat present and visible and a hybrid war going on in all of its forms.

In addition to all this, we must also add the global crisis of the “Coronavirus” that is not only affecting the daily lives of people and the functioning of the state, but is also already leaving its imprint on the world economy and proportionally on our own.

Men and women of all ranks, members of the National Guard, today we are not tested on our personal “Beliefs” but on our faith in the values ​​of Hellenism and our commitment to our duty and mission.

Today, in this peculiar time, we are called upon to improve the combat capacity of the National Guard in order to secure its role as a pillar of the National Power of the Republic of Cyprus, as well as its ability to carry out the operational mission of Deterrence and Defense of the country.

And this is the task that you have an obligation to continue and complete. This project has a purpose and a goal. And its destination is three-dimensional.

The geographical. We are still far away from Kyrenia.

The spiritual, which is identified with the “will”. And the “will” is the driving force of man.

The logistical, i.e. the means and procedures required for it.

The work is hard, but remember, you are not alone.

The National Guard enjoys the confidence and support of the State, as expressed in the decisions, actions and acts of the Ministry of Defense and the Minister in person.

However, the responsibility for this work rests with you…. and to you, men and women of the National Guard, whom I address today, for the last time, not in the capacity as your Chief, but in that of a man who lived every moment of his military journey intensively.

So knowing you and the difficulty of your task, instead of your other reasons and tips, I list the tenets of my personal code of conduct and urge you to:

Today is a special day for the National Guard and a day of joy for me. A journey reaches its destination. An almost 43-year-old journey, through narrow, dirt and paved roads, forests and valleys, plains and rugged terrain, remote small or abandoned villages, towns and cities.

Along the way, I was assigned critical tasks and entrusted with high-level positions, met many simple and important people, lived small and great moments, and gained experiences.

For all these, I thank:

my family, wife and children.

Thank you all and I assure you that I will remain one of you in my new life. However, I would like to make a special reference to the two Deputy Heads I have worked with, who consulted and supported me during my leadership period.

General Andreas Markides, a Man with capital M, a professional, a leader, a patriot.

General Costas Chryssiliou, another professional, leader and patriot, with whom we started together at the Hellenic Army Academy.  A long-standing personal bond has developed and is connecting us as classmates, colleagues and brothers.  I thank them both and their families and I will always have a lifelong debt to them.

Officers, Non-Commissioned Officers, Soldiers, Sailors, Airforce men, members of the Reserve forces, Civilian Personnel of the National Guard, I bow and salute the war flags of our Formations, Groups and Units and pay tribute to our heroes

As I pass on my duties today and leave the active service, I depart for my new life with endless pride and immense gratitude, not only because I have become a General and Chief, but simply because I have had the fortune and honor to “walk” with you and command soldiers.

Finally, I wish the Almighty God always be with you, to give you and your families health, happiness and strength to accomplish the noble goals of your personal and professional life …… and I invite you to say:

Long live the Republic of Cyprus!