The first US air strikes in Syria signed by Biden administration – MAP
Defence Redefined
Published on 26/02/2021 at 11:25

Yesterday, Thursday 25/02, the US carried out air strikes against positions of Iranian-backed militias in Syria near the Iraqi border, according to reports by American media.

According to information from the Associated Press, the US carried out the operation, while no other coalition force participated in it.

“I’m sure of the target we hit, we know what we hit,” Secretary of Defence Lloyd Austin told reporters accompanying him on a trip from California to Washington. Speaking shortly after the air strikes, he added: “We are convinced that this target is being used by the Shiite fighters themselves who carried out the attacks (on February 15 in northern Iraq).”

Austin said he briefed the new US President Joe Biden on the operation. Earlier, Pentagon spokesman John Kirby said the US action was a “proportionate military response” to diplomatic action, including consultations with coalition partners. 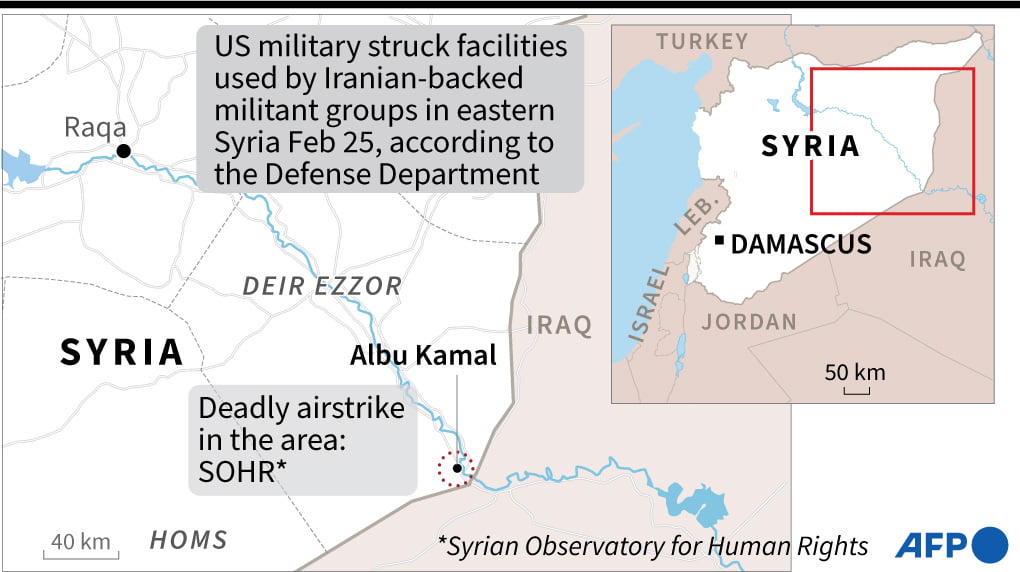 “The operation sends an unambiguous message: President Biden will act to protect US personnel,” Kirby said. “At the same time, we have acted in a deliberate manner that aims to de-escalate the overall situation (including the actions of the Iranian militias) in eastern Syria and Iraq.”

Kirby said US air strikes “destroyed several facilities at a border checkpoint used by Iranian-backed militant groups,” including Kait’ib Hezbollah and Kait’ib Sayyid al-Shuhada. The United States has blamed Kataib Hezbollah for a series of attacks on US personnel and interests in Iraq in the past.

Also read: Turkish-backed Syrians claim to have built their own military vehicle – VIDEO

The reported air strike, ordered by President Joe Biden, was an apparent response to missile strikes against US targets in Iraq. Recent attacks on US troops allegedly linked to Iran-backed militant groups have targeted coalition forces outside Irbil International Airport, Balad Air Base and the US Embassy in Baghdad within the Green Zone.

So far, there is no information on yesterday’s air strikes regarding the damage caused by Damascus or Tehran. However, according to the AFP news agency, the attack killed 17 people and destroyed three ammunition vehicles originating from Iraq to Syria.

#UPDATE US airstrikes have struck facilities in Syria used by Iran-backed armed groups.

Syrian Observatory for Human Rights says 17 people were killed when the strike hit three trucks loaded with munitions coming from Iraq near the Syrian city of Bukamalhttps://t.co/ukYhN4lGvq pic.twitter.com/mxegNnl60s

The operation was small-scale, with the aim of possibly reducing the risk of escalation. Obviously, this was an act of intimidation, aimed not only at harming the enemy, but also at exerting political pressure.

Biden allegedly agreed with US Secretary of Defence to carry out the attacks in order to send a strong message that deters Iran in view of the discussion of the latest reports on Iran’s nuclear program by the International Atomic Energy Agency in Vienna. The proposed resolution is expected to “underline strong concerns about the IAEA findings” and “express the deepest concern of the Governing Council regarding Iran’s co-operation.”