NEWS
The acquisition of French frigates and new Rafale fighter jets is signed today on the armored cruiser “Averof”
Defence Redefined
Published on 24/03/2022 at 13:27 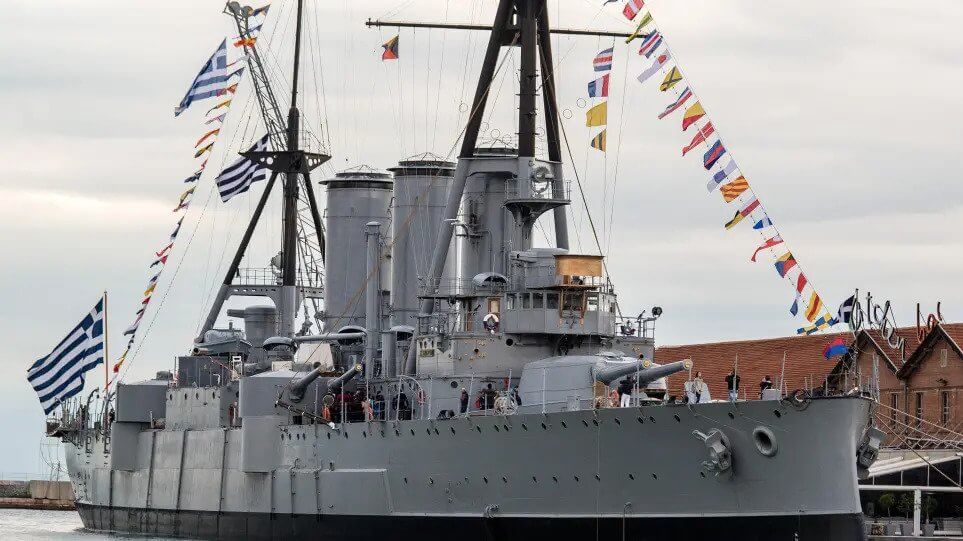 Today, March 24, the Greek side will receive the delegation of the French Ministry of Defence for the final signing of the contracts regarding the acquisition of 3+1 state-of-the-art [email protected] frigates by the Hellenic Navy and the 6 additional Rafale added to the initial order of 18 aircraft for the Hellenic Air Force.

In particular, as far as the Rafale model is concerned, it is considered that it will stand out since, according to information, its size scale is 1: 8 in relation to the real one!

The two contracts, which consist of several separate agreements, will be signed by the Minister of National Defence, Mr. Nikos Panagiotopoulos, and by his French counterpart, Mrs. Florence Parley, against the background of the two assets’ models, whose full integration in the Greek arsenal is believed to establish a new balance of power in the Aegean, turning our country into a regional superpower of the SE Mediterranean.

According to “Proto Thema”, the two ministers, in their statements, are expected to confirm the close Greek-French strategic relationship in the defence sector, while they will also refer to the existing potential for its further development and expansion, on the occasion of the war in Ukraine. The importance that the French attach to their visit to Greece today, but also to the extent of the two agreements in terms of their defence industry, is reflected in the fact that their delegation consists of 14 high-ranking officials of the French Ministry of Defence and some top company executives from Naval Group – manufacturer of [email protected] – and Dassault Aviation, manufacturer of Rafale.

According to Pentagon circles, the fact that the signing of the contracts takes place just one day before March 25, the celebration of our National Polygenesis, in combination with the choice of the armoured cruiser “Averof” – the ship that was the catalyst for Greek naval dominance in the Balkan wars of 1912-13 against the Ottomans – as the place where the ceremony will be held, renders the whole process symbolic, sending a clear message of determination to the Turkish side.

According to information, the French Minister of Defence, Mrs. Florence Parley, is going to arrive at the military airport of Elefsina with a special flight shortly after 5 in the afternoon, and the motorcade will leave directly for Marina Floisvou and the armoured cruiser “Averof”.

Immediately after the final signing of the contracts for the acquisition of the [email protected] frigates and the additional 6 Rafale by our country, the two delegations will board the French nuclear-powered aircraft carrier “Charles de Gaulle”, which will be chartered in Faliraki Bay, where it will remain for a few days.

There, following a tour of the aircraft carrier by the captain, the Greek and French officials will be informed about the mission of the French ship in the SE Mediterranean region, while issues of further cooperation of the two Ministries of Defence are expected to be considered over dinner.

In this direction, the personal meeting that the Chief of the Hellenic National Defence General Staff, Mr. Konstantinos Floros, will have with his French counterpart, General Thierry Burkhard, on “Charles de Gaulle” will be especially important. The two leaders are expected to agree on the expansion of the training cooperation between the Armed Forces of the two countries, including the conduct of joint training between the Greek and French Special Operations Forces. In this context, it is not ruled out that in the next period of time joint exercises will be held with the participation of Greek Special Forces and members of the legendary French “Foreign Legion”.

Regarding the French Defence Minister, it should be noted that the next day, March 25, Florence Parley will represent the French President Emmanuel Macron at the celebrations held for the Greek Revolution 1821, watching from the official podium the great military parade in Syntagma Square. The first 6 Greek Rafale, which have joined service with the Hellenic Air Force since the beginning of the year, are expected to fly over the parade.

As to the Greek-French defence cooperation, it should be noted that the French side has expressed its satisfaction to our country, as the acquisition of Rafale fighters by our Air Force was an example, giving an additional boost to the exports of the French fighter and opening the way to new acquisitions. Indonesia’s decision to cancel the order of Russian Mig 35 aircraft, due to the events in Ukraine, choosing to replace them with 42 Rafale is indeed remarkable.

In fact, during the meeting he had on March 11 in Athens with his Indonesian counterpart Prabouo Subianto, Mr. Panagiotopoulos discussed the possibility of training Indonesian pilots of Rafale in Greece, as the two countries, being both islands, share many similarities in their operational environment.