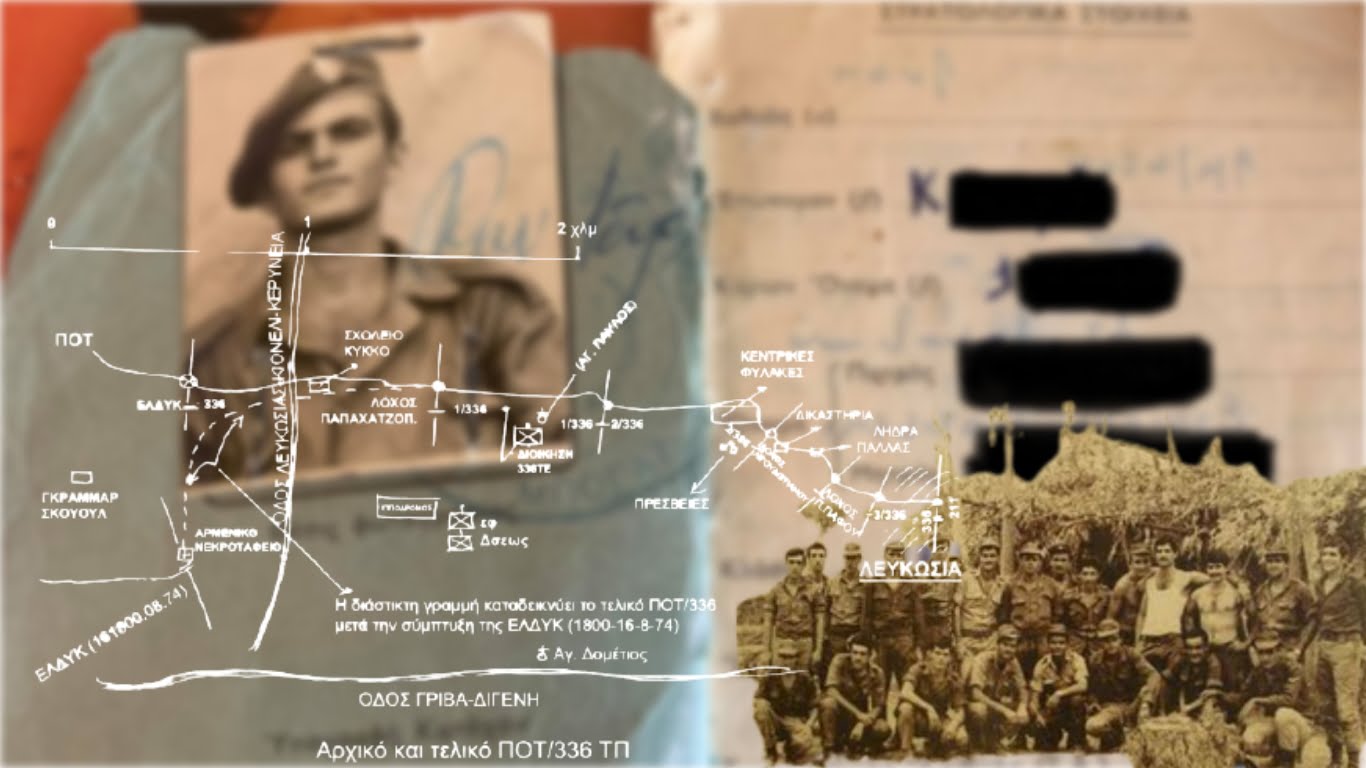 The Republic of Cyprus, whose 37% of its territories have been occupied for 47 years, continues to exist today, due to some invisible heroes, most of whom gave their lives on the battlefields, and others, however, who are still among us.

People who lost everything overnight while they were in the trenches are still alive, rebuilding their lives in exile.

In this context, we visited Mr. IK, a resident of Nicosia, a refugee from Lysi, Famagusta and a warrior of the heroic 336th Infantry Battalion, whose Commander then was Major Dimitrios Alevromageiros.

Mr. IK told us his own story and how he experienced this war. “On July 20, the National Guard General Staff ordered general mobilization, which was completed in the afternoon at Prastio in Famagusta. There in Prastio we were in an area full of eucalyptus trees. There, the entire mobilization of the 336th Infantry Battalion took place. In the afternoon (July 20), I was one of those who were ordered to go to Varosia to take the weapons and bring them to Prastio so they are taken by the soldiers. While we were coming back, on the Famagusta – Nicosia highway, we saw two planes and were told they were Greek, even though they were Turkish. So, they tried to strike us but fortunately unsuccessfully, as we ran into the fields and escaped. We reached Prastio and handed over the weapons and the whole battalion was armed.

At dawn on the 21st at 04:00, the 2nd Reserve Company of Lieutenant Christos Solomis (who was later Minister of Health) was ordered by our battalion to take over the Turkish Cypriot quarter so we went to the city. I was holding a Bren machine gun, and we proceeded to the “Kutuk” area, outside the enclosed town. When we got there we were warned to stop and then ordered to go back. They ordered all of us to go on the trucks and then they brought the whole battalion (1000 people) to the Presidential Palace in Nicosia overnight.

We were told that they would take us to Kyrenia. Then an order was issued to take us to prison (i.e. to the imprisoned graves) instead of taking us to Kyrenia. I will never forget this. There, in the cafe near the police canopy, Alevromageiros took us around 17:00 in the afternoon and a mortar injured Antonis Karas (later MP) and two or three other people. They were all taken to the Hospital.

There were three platoons and Alevromageiros selected 7-8 people. It was my destiny to be among them, to go out at 18:30 to enter the imprisoned graves. The Turks were on the roof of the hotel “Kornaro” and were shooting at the imprisoned graves. There at the British embassy, there was an apartment building with a garage on the ground floor and there I found the bodies of two of my comrades-in-arms, who were with me in the imprisoned graves. There we got in one house after another, even through the windows. We turned one house into an outpost using sandbags. We were 100-150 meters away from the house of Dektash, we were separated by a small river and above his house there was an outpost.

The next day (July 24), the atrocities broke out. The Turks came from Ledra Palace to attack us from the back. I placed the Bren on an acacia and started shooting. My knees were burning because of the shells. Many were coming to attack us behind the courts. Fifteen of us were there. The next day, we asked them to bring us sights because we did not have any. I remember seeing a field full of dead bodies lying in front of us, while the trucks were filled with dead bodies.

We were a forward outpost with no cover so we were exposed. They threw a mortar at us from Denktash’s house and my friend from Assia, Aristocles Giakoumis, was killed. I lost many friends and relatives. The province of Famagusta was the one which kept Nicosia. At that time Aristocles was holding the hose to wet the sandbags. Another Lysiotis was seriously injured. The sconce was filled with blood.

We had to expand to other houses, so that they could bring us food and ammunition, we could not be left without ammunition. At one point they warned us that Greek planes would arrive and not to strike anyone. We heard the rounds near us and we thought the Turks had spotted them. The next day, we found out that they were on our side.

I stayed there until the end of the war. The most vivid memory was when the truce took place, we were all from Famagusta and the relatives came and looked for their own. We left Famagusta unarmed and it was captured by the Turks. Our battalion was responsible for the security of Famagusta. We could hear on the radio that the Turks were capturing our villages and there was nothing we could do. They left very few soldiers in Famagusta who were killed by the Turks. The 336th Battalion kept the line of Defence of Nicosia, the battalion of Alevromageiros, the battalion of Famagusta. Our base was the prisons and we were out. My outpost was called “Michaelidis”.

The area of ​​responsibility of the 336th Infantry Battalion extended from Ledra Palace, to the Nicosia Race Club and the ELDYK camp (it covered the right side of the camp). It was about 3.5 kilometers for 1000 men, officers and reserve soldiers. Most of the enlisted reserves of the 336th Battalion were from Famagusta, but others from other Units were also enlisted, because they could not reach them due to the invasion. 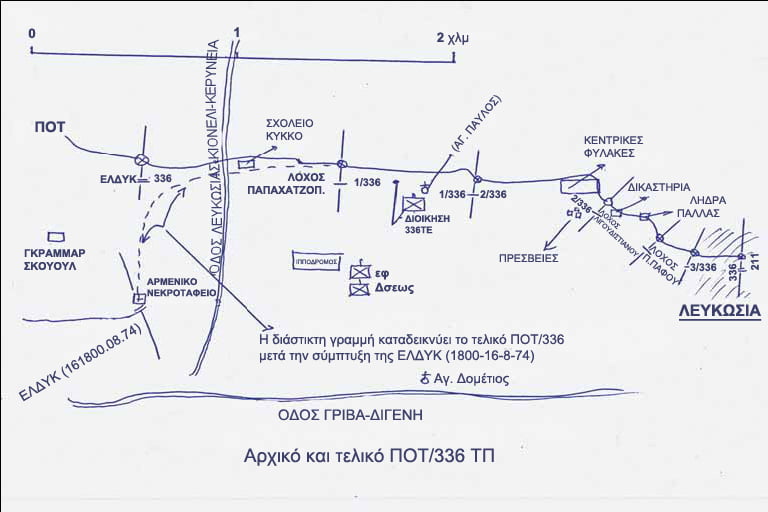 Turkish forces continued their attacks, blatantly ignoring the ceasefire agreement. The act of the Battalion men is noteworthy. These men, on the 12th of August, gathered in the area of ​​the Imprisoned Graves and there, before the heroic dead of E.O.K.A., vowed not to allow the Turks to contaminate this sanctuary and the holy graves, even if they had to lose their lives.

This oath, which was kept to the end by the men of the 336th Battalion, gave them the strength to continue their struggle, preserving what was most sacred to them, their homeland and their freedom.

While the 336th Battalion filled the pages of the history of Cypriot Hellenism with its own heroism, it was during the second phase of the Turkish invasion. From the 14th of August until the dawn of the 17th of August, the men of the Battalion put up strong and heroic resistance to the bombardment and fierce attacks of the Turks, succeeding in inflicting heavy casualties on the opponents and finally keeping the area of Nicosia free. It is also worth noting that these men fought selflessly and vigorously defending Nicosia, while at the same time the hometown of most of the Battalion’s reserves, Famagusta, fell into the hands of the Turkish invader.

The sacrifice of the men of the 336th National Guard Battalion, lies in the fact that even though they were aware that Turkey was clearly a stronger opponent, they did not give up and kept fighting until the end, with unprecedented strength and heroism. The maintenance of Nicosia as the capital of Cyprus, even after the conquest of half the island, relies on the resistance and sacrifice of the men of 336th Battalion, of EL.DY.K. and the neighboring units, which contributed tremendously to the fight against Attila. 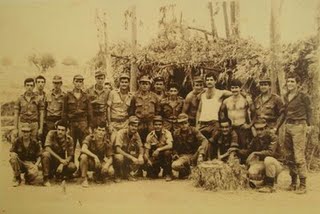