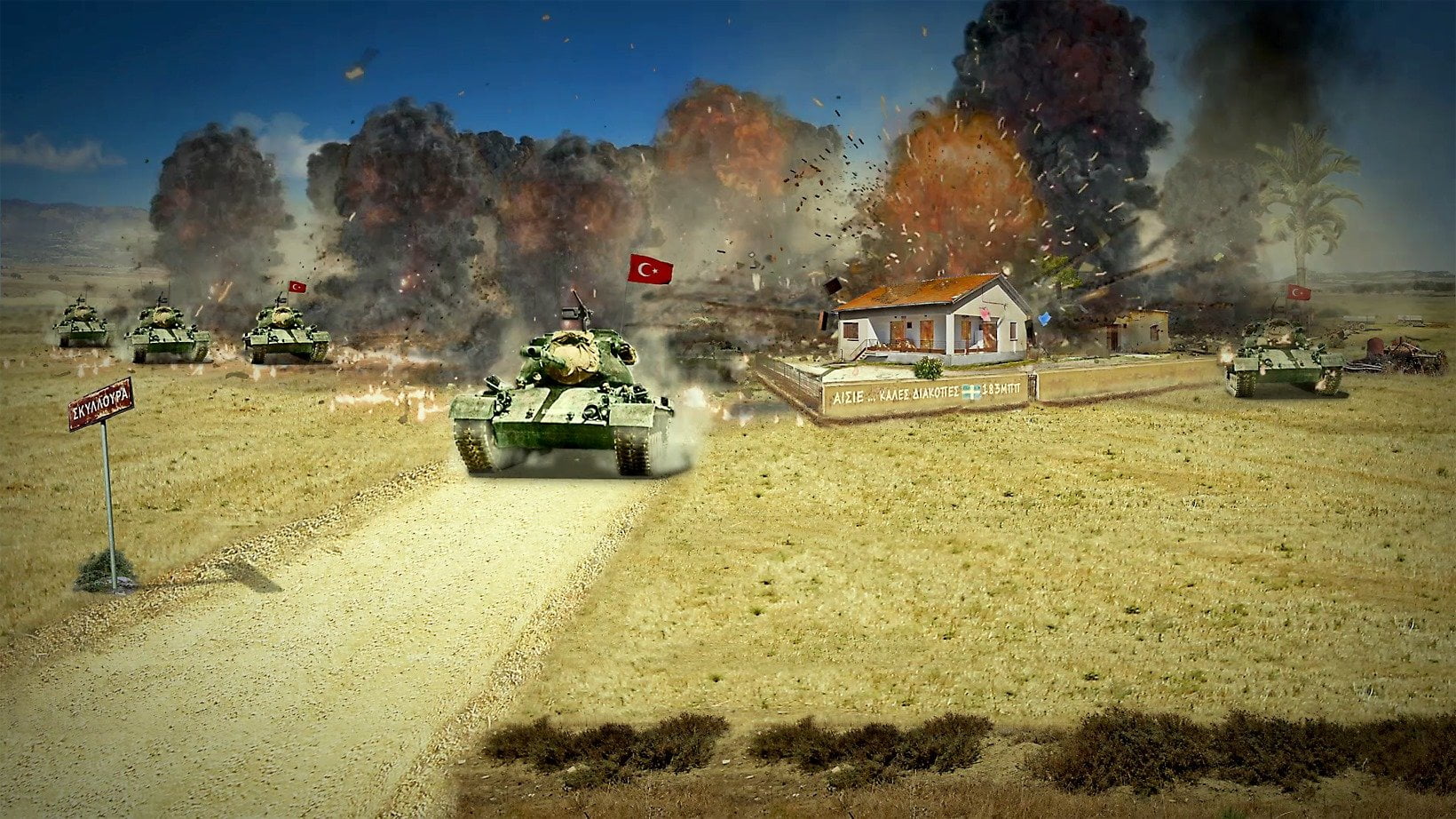 On August 15, 1974, the first tank battle (and so far the only one in Greece and Cyprus) took place between fighters of the National Guard and the Turkish invader. We present a summary of the shocking battle from the book “Black Berets-Black July” prepared by the author of the book, Vasilis Petrou and with the geospatial animation by Odysseas Christou (press here for more info about his work).

On Thursday, August 15, the Turkish attack in the western sector started early in the morning, with mortar fire at the positions of the NG in the village of Skylloura. At 13.30, a Company of 13 M-47 tanks started from the village of Fotta. These were followed by the 4th Paratroopers Battalion and a company from the Parachute Brigade, as well as the 1st and 3rd Commando Battalions. Three M-47s moved towards the village of Agios Vassilios and the others towards Skylloura. At around 15:00, the ten tanks suddenly appeared very close to the positions of the NG men.

The M-47 tank, (seized in a previous combat) with its original ensignia, will engage, with its 5-men crew (3 Greeks and 2 Greek-Cypriots), in the first and only tank battle in the history of the Greek Armor Weapon. Today there are three published testimonies, one of the crew commander Sergeant (Reserve) Drossos Konstantinos, of the gunner (Reserve) Koudounas Andreas and of the loader Sergeant (Reserve) Kritharis Andreas. 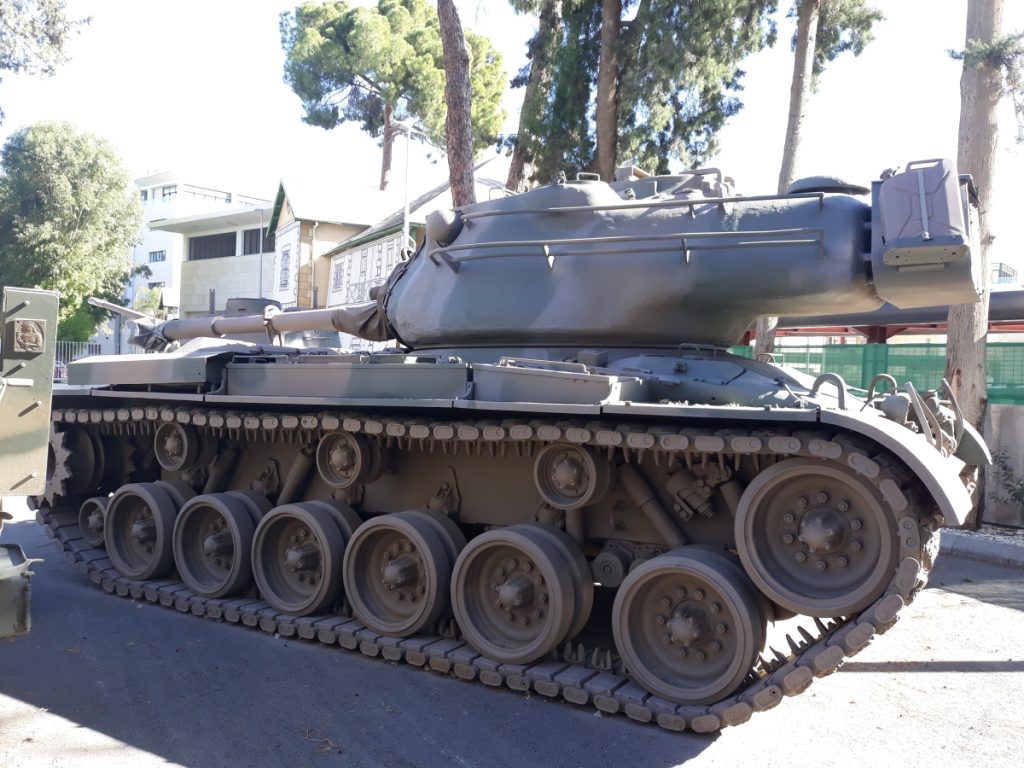 The Deputy Commander of the Turkish Commando Brigade, Colonel Salih Gülergüz, states the following: “While our tanks were passing through Skylloura, Greek Cypriot tanks, which were estimated to be up to 60 and wanted to go to Agios Vasileios village, injured two of our soldiers.” This erroneous report of the Turkish Colonel depicts the panic of the Turks, as well as their attempt to justify the many losses they suffered. The facts are as follows: around 15.00 on August 15, the crew was resting next to the M-47, since in the morning, no movement of the Turkish army towards their positions was observed.

Upon hearing the news that Turkish tanks were approaching, the crew boarded the M-47 and after seeing the Marmon-Herrington (M/H) Combat Tank (Light Series) and BTRs along with the M-113 and the Captain evacuating Skylloura, they moved south to the edge of the village, through the soccer field in order to hide. Their hiding spot was located behind some eucalyptus trees, facing south-east. Meanwhile, the other ten enemy M-47s that approached Skylloura from the northeast had entered the village, but they did not realize that the M-47 they saw passing carrying Turkish insignia was not Turkish.

On the asphalt road that connected the village of Skylloura with the village of Agios Vassilios, three enemy M-47s were moving in convoy. When they approached the bridge that was above the stream “Skylloura”, between the two villages they turned south and tried to go down into the stream. They were 300 meters away from the M-47, which was waiting for them to cross the bridge and strike them while on it, when they turned. The M-47 Commander orders the third tank to be beaten.

The first kinetic energy projectile hits the third tank in the turret ring and after an explosion, the turret is thrown into the air, without the tank being engulfed in flames. The crew sees the results of such a projectile for the first time and is thrilled with excitement. Immediately after that, they hit with the same type of projectile, the first tank on the convoy. The middle tank was then hit with a piercing projectile round in the turret, causing it to be engulfed in flames. Immediately the M-47 moved backwards into the village, where the Turkish M-47s were. These moved their turrets manually left and right, or turned the whole tank, trying to locate where the fire was coming from, since there were no elements of the NG in the village.

Meanwhile, the gunner, Sergeant Kritharis, realized that during the previous shots against the three tanks, they had used all five piercing projectiles. The rest of the projectiles were located under the floor of the turret, so he loaded the cannon with incendiary-smoke white phosphorus projectile (used for smoke screen – for concealment).

The M-47 stopped the Turkish tanks and troops near the area of ​​the stadium, when suddenly an enemy M-47 appeared at a distance of 80 meters. They struck the tank, the projectile exploded on it and phosphorus set it on fire.

At around 17.00, the Turks had already realized that the M-47 was their enemy. Then the M-47 Commander, Sergeant Drossos, ordered the driver Corporal Tounta to drive the M-47 to the hill where the Captain was and continue the battle there. The tank was fit to move through a route which offered cover and was previously spotted.

The Turkish soldiers and the enemy M-47 pursued the M-47, but on their way out of the village of Skylloura, moving west, they met the stream “Pyrgos”, which stopped their speed. The M-47 took a cover position next to the M-113 and was watching the Turkish tanks, which had now left Skylloura and stopped at a distance of 1200 meters from the position of the tank, but with their flanks turned towards the M-47.

The M-47 crew created a smoke screen, firing an incendiary-smoke projectile and then struck the closest enemy M-47, also with an incendiary-smoke projectile, setting it on fire. They continued to fire and change position, to avoid enemy fire, which was constantly aimed at the hill. At one point, the gunner, as he was throwing the projectile shells out of the tank, saw an enemy M-47 at a distance of 150 meters on the left, coming straight at them and started shouting. Then the crew commander ordered:

“Left, left, Tounta back” (left in order for the gunner to turn the turret to the left and the driver to move back). The enemy M-47 fired at them and the 90mm projectile passed through the M-47. Then the guner instinctively fired all the rounds of his coaxial machine gun on the enemy M-47. The cannons of the two M-47s were found almost opposite.

As the M-47 moved backwards, Koudounas fired a shot with the cannon, but due to the movement of the tank, the projectile hit the enemy M-47 low and then went on the ground, leaving the enemy M-47 intact. They reloaded and moved again, forward this time. This time the shot was successful and a second round destroyed it completely. They then saw three enemy M-47s heading back to their positions.

In the area between the village Skylloura and the village Ag.Marina around 15 Turkish M-47 tanks as well as M-113s and several Turkish soldiers were gathered. Shots were fired against them by the 183 Artillery Battalion. Taking advantage of the NG’s artillery fire, the fighters moved back towards the village of Filia.