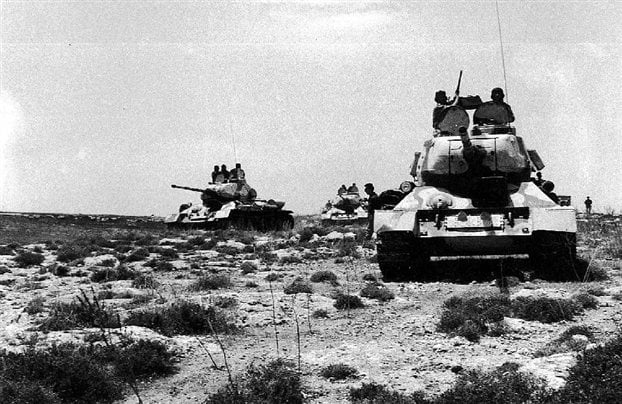 Today marks 47 years since the Turkish invasion, the consequences of which Cyprus is still facing. The Cypriot people today condemn the crime and honour the fallen.

The sirens sounded in all the cities at 5:30 in the morning, the time when Turkey invaded Cyprus in 1974.

The President of the Republic, accompanied by the Minister of Defence, will initially attend a memorial prayer at the Tomb of Makedonitissa at 8 a.m. and then, at 10 a.m. the annual memorial service for those who fell during the Turkish Invasion. The memorial service will be held at the Church of Apostle Barnabas, at the Archdiocese of Nicosia. At 9 pm, President Anastasiadis will be the keynote speaker at the event that will be held at the Presidential Palace in memory and honour of those who lost their lives during the Turkish invasion.

Political parties and organizations have issued statements condemning the invasion.

Awaiting for years, Turkey found – with the treacherous coup of the junta and the settlers – the reason to implement its own plans on the island, spreading death and destruction.

On July 20, 1974, Turkey invaded Cyprus in violation of the United Nations Charter. This first phase of the crime was followed by a second one on August 14, 1974, with Turkey committing its crime against Cyprus and its people. In this phase the city of Famagusta was occupied.

The conqueror stepped on the sacred soil of our land. Death, pain, refuge, rape, missing and trapped people. Today, 47 years later, Turkey sets foot on the island once again with the Turkish President making threats regarding Varosia.

As a result of the Turkish military invasion and occupation, 162,000 Greek Cypriots were displaced and became refugees in their own homeland. Tents, refugee camps everywhere and children in breadline.

The most tragic consequence of the invasion is the grief of the relatives of the missing, who are still struggling to find out about the fate of their loved ones. Thousands of Greek Cypriots had been arrested and detained in concentration camps in Cyprus by Turkish soldiers and paramilitaries operating under the Turkish army. In addition, more than 2,000 prisoners of war were illegally transferred and held in prisons in Turkey. Some of them are still missing. Hundreds of other Greek Cypriots, both soldiers and civilians (including the elderly, women and children) have disappeared in Turkish-occupied areas and their fate is still unknown. In all these cases there is well-documented evidence that the missing persons were last seen alive at the hands of the Turkish army or paramilitary groups, acting under the leadership and responsibility of the Turkish occupying forces. The Committee on Missing Persons in Cyprus is trying to provide answers by exhuming and identifying the bones of the missing.

Turkey has illegally occupied 37% of the territory of the Republic of Cyprus, which it still holds today, pursuing the same policy, disregarding UN resolutions, decisions of international courts and resolutions of other international organizations.

It continues the systematic policy of settlement of the occupied part of Cyprus and the destruction of the cultural heritage of this historic Mediterranean island, aiming, among other things, at the elimination of every Greek and Christian element that has existed for centuries.

Negotiations for the settlement of the Cyprus issue have been underway since 1975 under the auspices of the UN, with the last attempt taking place at the end of April in Geneva.