National Defence Minister, Nikolaos Panagiotopoulos, has given an interview to Cyprus Broadcasting Corporation (RIK), on the “Defending the Homeland” program.

In particular, regarding the Cyprus issue, the Minister stated that “the defence doctrine has always provided for the coverage of Cyprus’ defence needs. We haven’t changed that. Greece certainly has its defence capabilities or weapon systems for Cyprus’ defence as well and I would say that is a given. It’s not merely something I am in charge of, it’s always been the doctrine. Greece is next to Cyprus, Cyprus is next to Greece, we are brothers and together we fight to stand in a new, very complex geopolitical era,” he concluded, emphasizing that Cypriots can feel safe with the National Guard and the Defence Ministry of Cyprus. 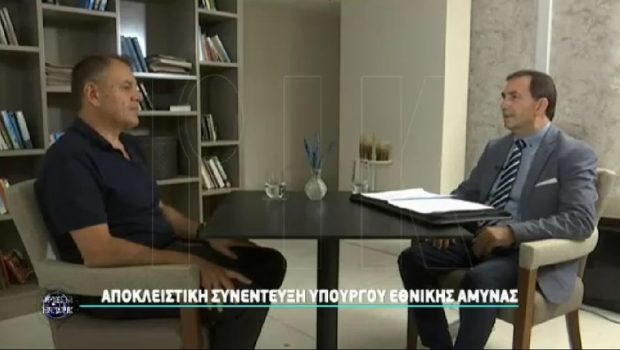 Regarding Greece’s national defence policy, the Minister of National Defence stated that Greece is moving along two axes, one of which is related to defence diplomacy and the conclusion and development of alliances and strategic partnerships with countries that share the same views with Greece on peace and stability in our region. The second axis is related to the acquisition of new weapon systems and filling gaps that have arisen due to the economic situation of recent years.

Regarding armaments and Turkish aggression, he stated that the acquisition of the three Belara frigates by France is not a potential threat or aggressive attitude of Greece towards Turkey. Rather, the aim is to replace France’s old fleet.

Also read: [email protected] | The names of the three frigates – A name that refers to Cyprus

Referring to the strategic importance of the port of Alexandroupolis, Mr. Panagiotopoulos said that for the first time the Straits are being bypassed, something that bothers Turkey, while the investment also brings significant economic benefits for the region.

Asked if he thinks that Turkey’s challenges and threats will intensify, the Minister of National Defence replied:

“We have remained vigilant for the last 2-3 years, so we are not changing what we have been doing or our existing planning, and of course we are moving as fast as possible in our effort to upgrade the equipment of our Armed Forces. We may witness tension in rhetoric. I believe and hope, as I am naturally an optimistic person, that communication channels will be found or restored, whether at the level of leaders, or of Foreign Ministers, Ministers of National Defence, or even military leadership.

I think it is essential that these channels of communication be restored and I believe that eventually they will be. Our Prime Minister, Kyriakos Mitsotakis, has issued an invitation to continue the dialogue on the many differences that we undoubtedly have and from then on I think that this invitation will receive some response. On the other hand – to be realistic – I don’t expect these verbal extremes, the pro-war aggressive rhetoric to stop, especially from the Turkish President’s side.

The narrative of demilitarization because Greece or the Greek islands supposedly constitute a military threat for Turkey is outrageous and funny, according to Mr. Panagiotopoulos, who noted that after Greece’s information initiatives at an international level (NATO, EU, USA and other countries), “all the powerful players, internationally, are putting pressure on the Turkish President to change his ways, change his attitudes and do what we consider normal and expected in international relations: to adopt an international order based on concrete rules and not on the Law of the strong or the Law of the one who has the power of arms on his side.

However, for better or worse, we are also getting ready to upgrade the country’s equipment capabilities. It is good to have International Law on your side, but it is even better to have modern weapon systems and great deterrent power through your Armed Forces. And I choose this path.”

He stated that the lifting of the arms embargo from the USA to Cyprus, besides being of key importance, could pave the way, not only for the purchase of weapon systems, but for the creation of infrastructure, such as a naval base.