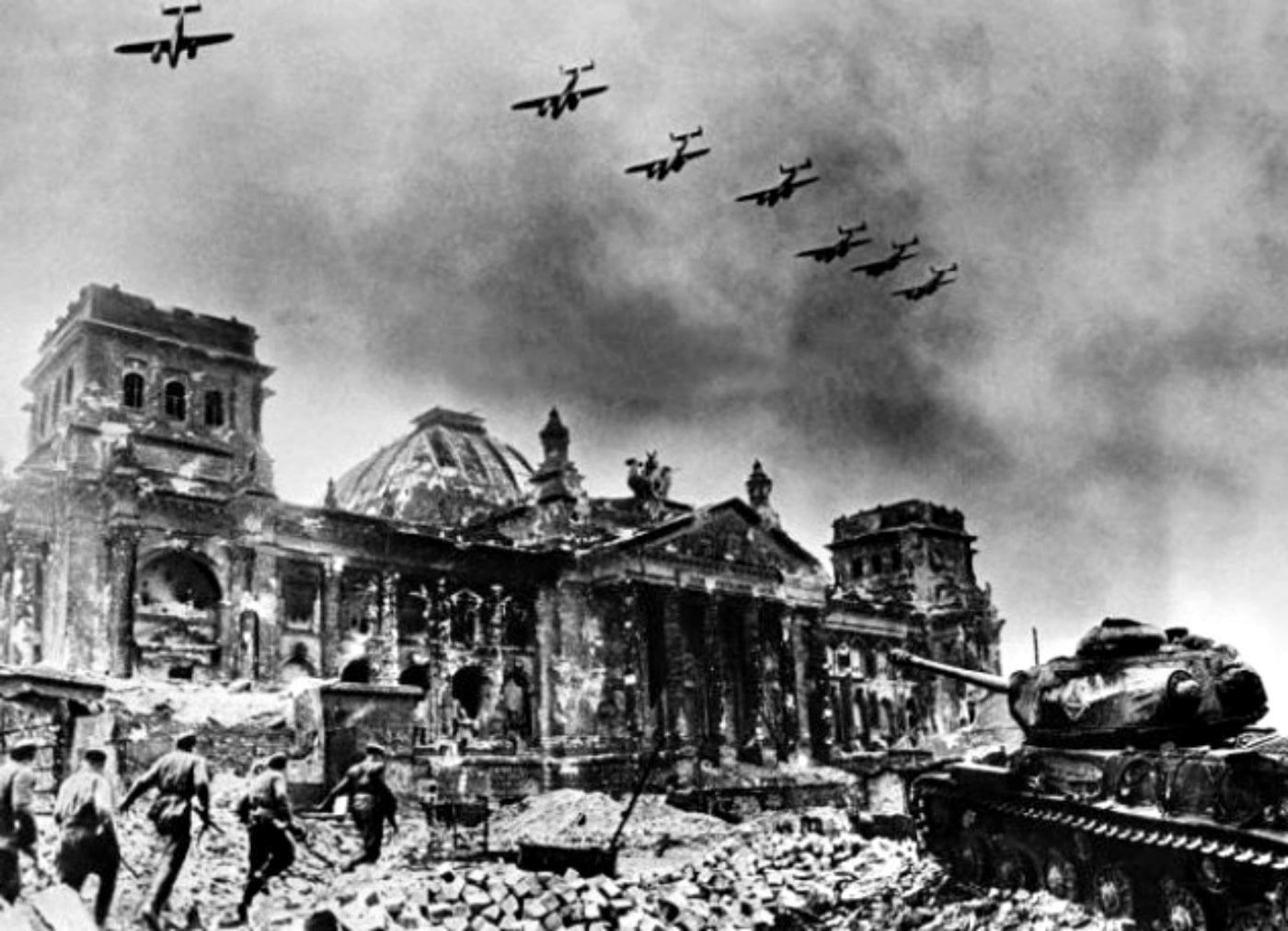 One week after the signing of the Ribbentrop-Molotov Pact between Germany and the Soviet Union, the German invasion of Poland took place, which effectively marked the beginning of World War II.

Since there was no justification for the invasion, the Nazis made up one. On August 31, 1939, the SS took 150 detainees from the Buchenwald concentration camp, transported them to the Gleiwitz radio station and dressed them in Polish uniforms.

They forced them to swallow poison, shoot the corpses, cause minor damage to the station, so that it seemed that it had been attacked. Using the station radio, an SS man screamed in Polish that Polish troops were preparing to invade Germany.

The station commander, Colonel Steinmetz, was initially unconvinced of the fraud, but the SS responded with a “Fuhrerbefehl!” (order of the Führer).

In this way Hitler could then officially announce, on September 1, 1939, to the Reichstag that the Polish army had attempted to invade German territory and that the Wehrmacht was resisting fire.

The Wehrmacht, based on a detailed plan drawn up by Walter von Brauchich and his staff, codenamed Fall Weiss (Plan White), is attacking Poland by land, sea and air. It is September 1, 1939 and World War II begins in Europe.

The Luftwaffe participated in the operation with 2.315 aircraft, divided into two groups. The German Navy (Kriegsmarine) supported the “Ost” (= East) group with artillery fire and confronted the even weaker Polish Navy.

The combined attack of tanks and air force was the first practical application of the strategy that the Wehrmacht will follow in the future: It is the strategy of the “Lightning War” (Blitzkrieg). With this war strategy, the Germans managed to annihilate the opposing forces in a very short period of time, and according to Heinz Gunderian, General of the German army and the main instigator of the plan of the lightning war, the Blitzkrieg could destroy an army in one day. The Germans engaged selected tank divisions and vertical attack planes, destroying the lines of the Polish army.

The Polish reserves had not completed their formation. In addition, the Polish generals made the mistake of defending the entire territory of the nation from the west, which broke up the already meager forces of Poland.

The Polish forces consisted of about 39 infantry divisions, 11 cavalry brigades, 3 mountain brigades, two armored – motorized and a few smaller units. They had only 695 tanks, relatively light, and 52 armored vehicles, while 185 tanks remained in reserve.

The Polish infantry and (to a lesser extent) the cavalry were powerless in front of the German armored tanks. The German Air Force did not strike the battle formations, but the rearguards, disorganizing them completely, destroying equipment depots and causing terror to civilians, who rushed into the streets and caused congestion.

The Polish cavalry loses all its horses from air strikes and is virtually neutralized. It is the first implementation of the new German war tactic, the “movement war”, the “lightning war” (Blitzkrieg). On the contrary, the German artillery inflicts relatively significant losses on the Polish fighters.

The Polish air force loses part of its aircraft on the ground. Some fighter planes, however, were active for some time and, although inferior to the Germans, inflicted relatively significant losses on the Luftwaffe.

By the end of the 3rd day of the invasion, the German army had penetrated 80 kilometers into Poland.

Despite some successful counter attacks at the beginning of the invasion, the Polish air force was destroyed. German aircraft were now free to engage fully in supporting ground operations. On September 8, the first attacks in the Polish capital were successfully repulsed.

The Polish attempt a counterattack: On September 9, Bortnowski’s team attacks Rudstedt’s side, which reacts immediately: He overthrows the front of the 10th Army (Reichenau) and confronts the counterattack, thus succeeding in circling 19 Polish divisions, in the so-called “enclave of Bzura”.

The Polish fought bravely against the invaders, in some cases desperately, even when it had already become apparent that the country’s defence was collapsing and there was no hope of victory.

The Polish cavalry, acting more as a fast infantry, inflicted significant losses on the German “Panzers”: It is estimated that between 360 and 400 tanks were destroyed in total. The aviation fought just as decisively, which was doomed from the start, both because of the small number of aircraft and their inferior types (the technology of Polish aircraft was not of the latest generation as the German ones’).

On September 10, the Luftwaffe launched heavy attacks in the capital, Warsaw. The Polish government ordered a general military retreat to the southeast. On September 14, the 19th Panzer Corps attacked the vital fortress of Brest-Litovsk (Eastern Poland). On September 15, the Germans delivered an ultimatum to Warsaw: “Surrender or you will be destroyed.”

The soldiers along with 100.000 civilians did not surrender. On September 17, the fortress of Bresk Litovsk collapsed. In this way any passage for the retreat of the Polish army to the east was blocked.

On the same day, Poland, after Molotov’s statement that “the Polish government has stopped giving signs of life”, is being invaded from the east: the Soviets implement the pact they signed with Germany in August and occupy “their” part, facing relatively little – but stubborn – resistance, as most of the existing Polish units were still facing west.

On September 19, the Polish army at Bzura was defeated. At the Battle of Bzura, 170.000 Poles were taken prisoner. Two days later, the Germans launched a massive bombardment of Warsaw.

A new ultimatum was issued on September 25 to the citizens and defenders of Warsaw, which was accompanied by airstrikes. However, the Polish capital (defended by Julius Rommel) did not succumb.

The Germans expected the capital to fall under siege, but Hitler declared it a “fortress” and ordered its bombing. Warsaw was completely destroyed. On September 26, the Germans launched a massive infantry attack on the city. Within a day they brought all the suburbs under their control. The city surrendered on September 27 after a four-day relentless land and air bombardment and its defenders were taken prisoner.

In material terms, the Polish Armed Forces were, in effect, destroyed. The German material losses are also relatively large, as the Germans lost 350-400 tanks (the vast majority of which were PzKw-1 and PzKw-2) and about 300 aircraft were shot down, while another 300 were severely damaged.

The Nazi state grew by 94,000 km2 and by population by about 10 million (some are of German descent, the majority are Polish). In the rest of the country, Hitler created, by special decree, on October 12, 1939, the “Generalgouvernement”, appointing Hans Frank as Governor.

The USSR occupied about 52% of its territory, home to almost 14 million people, with 38% being genuine Polish, 37% Ukrainians, 14% Belarusians, 8.5% Jews, 1% Russians and 0.5% Germans. There were also several refugees from the German-occupied territories (approximately 200.000), the majority of whom were Jews.

German and Soviet Officers after the invasion in Poland shake hands

Although the Polish territory is not very suitable for guerrilla warfare, due to its flat configuration, the resistance of the Polish began almost immediately. The “Army of the Fatherland” (Armia Krajowa) was immediately formed by a Polish officer, Tadeusz Bór-Komorowski, who, as he was preparing to leave the country after the collapse of his Army, heard his inner impulse and, taking the pseudonym “Bór”, remained forming the resistance movement.

Armia Krajowa, by the end of 1944, had 400.000 members. The “People’s Army” (Armia Ludowa) was also formed, with a much smaller force. The main problem of the Polish resistance was the lack of equipment and, above all, weapons. The Warsaw Uprising was suppressed – with considerable difficulty – by the Occupation forces, mainly because the Polish resistance did not have sufficient armaments and, in general, sufficient elements.