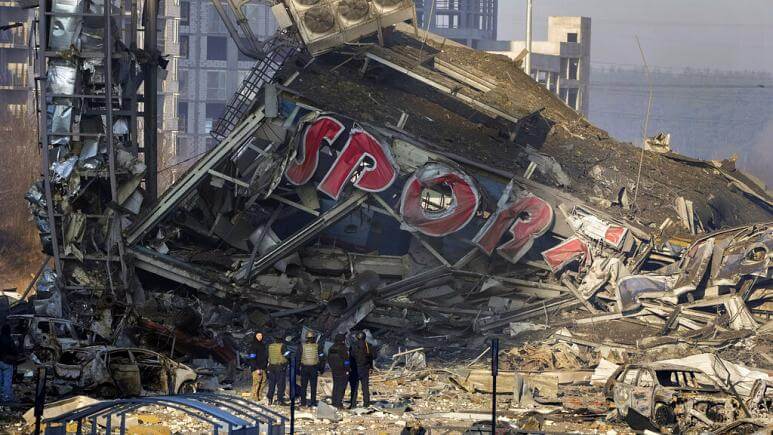 With the West planning a new round of sanctions against Moscow and a tightening of those already in place, the G7, NATO, and the European Union are meeting at the highest level today, Thursday, with the war in Ukraine taking over the top position of the agenda.

At the same time, a senior source in the US Department of Defence claims that the Ukrainian resistance is fruitful, as the Russian Army retreated tens of kilometers east of Kyiv and began to establish defensive positions on various fronts in Ukraine.

At the same time, in a new message, Volodymyr Zelensky called for demonstrations around the world a month after the Russian invasion of his country:

“Support Ukraine, freedom, life. Go out in your squares and streets so that everyone can see and hear you,” he urged. “Shout that people count, freedom counts, Ukraine counts,” he continued. “Russia has started a war against freedom,” he said, arguing that Moscow was trying to undermine the freedom of all people in Europe and around the world.

The 27 EU member-states gave the “green light” for the doubling of military aid to Ukraine on Wednesday ahead of the summit. The 27 approved military aid worth 500 million euros, while a previous aid package was worth another half a million.

This is a historic first, as weapons have never been sent to a non-EU country under attack. European treaties do not allow the use of EU funds for military purposes, so the first package of military aid took the form of a mechanism funded separately by the Member-States. The amount does not include weapons given bilaterally.

Several fires in the blockaded area of ​​the damaged Chernobyl nuclear power plant have now been extinguished, but others have not yet been brought under control, the International Atomic Energy Agency (IAEA) announced on Thursday night.

According to the head of the organization, Rafael Grossi, four fires were extinguished. The Ukrainian parliament said earlier this week that seven fires had broken out in the two-square-kilometer area, citing either Russian bombing or arson.

The area around the factory has been controlled by Russian troops almost since the start of the war. According to the Ukrainian Atomic Energy Commission, no measurements of radioactivity are currently being made in the region, but small increases in cesium concentration have been recorded near Kyiv and in two locations west of Chernobyl. However, these findings are not of particular concern to the committee.

Germany to speed up arms deliveries to Ukraine

Faster decision-making procedures for arms exports to Ukraine will be adopted by the German government, Economy Minister Robert Habeck told Die Welt on Wednesday. Arms deliveries must be approved by various ministries, coordinated by the federal chancellery.

The applications concerning Ukraine will now have the “highest priority” in terms of their processing and the Ministry of Economy will approve them immediately, the newspaper reported, citing government sources.

Russia’s plan for access to humanitarian aid and protection of the civilian population in Ukraine was rejected by the UN Security Council on Wednesday.

The plan did not mention the role played by Moscow in this humanitarian crisis. Only Russia and China supported the plan, while the other 13 abstained.

The UK sends another 6,000 anti-tank missiles

An additional 6,000 anti-tank missiles will be delivered to Ukraine by the United Kingdom, doubling arms deliveries after the Russian invasion.

Despite the extremely courageous resistance of the Ukrainians, “we cannot and will not remain inert and let the Russians pulverize Ukrainian cities,” said Boris Johnson before the NATO and G7 summits in Brussels, a month after the war outbreak.

The 6,000 anti-tank weapons will increase to 10,000 the number of such weapons sold in Ukraine. London has already delivered more than 4,000 US missiles to Kyiv, including the NLAW and Javelin systems as well as Starstreak portable missiles. Boris Johnson also announced the granting of 25 million pounds (30 million euros) in aid to the Ukrainian Army, in addition to the 400 million pounds of financial and humanitarian aid that London had already promised.