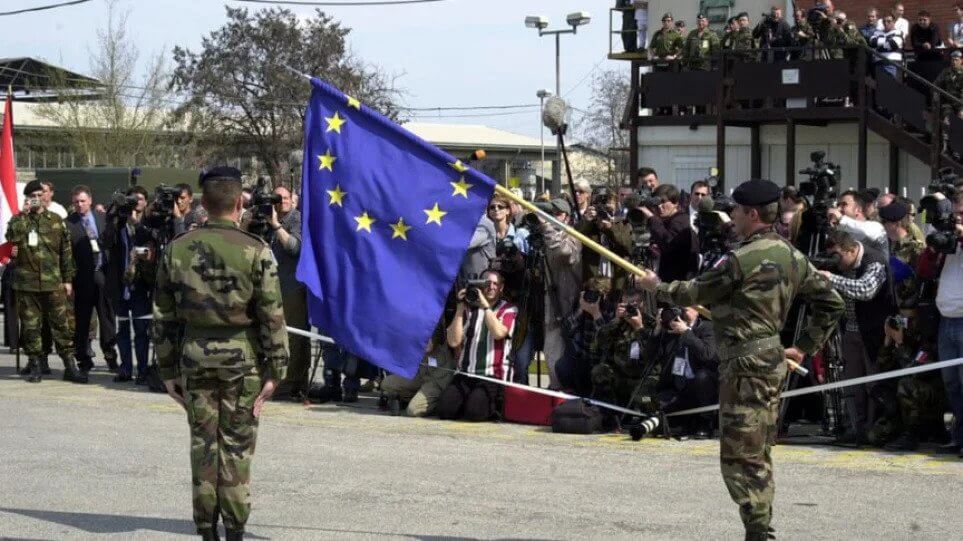 The unprecedented unity of the EU is highlighted by the text of the Strategic Compass adopted by the Ministers of Foreign Affairs and Defence of the European Union, noting the need for rapid and robust action in times of crisis. At the same time, the text points out that the goal is to strengthen the security and defence policy by 2030.

The 47-page text also states that the EU must have the means to safeguard both its interests and the protection of its citizens, underlining the need to strengthen cooperation with partners such as NATO.

In addition, emphasis is placed on the Western Balkans. Regarding the Eastern Mediterranean, there is a reference to challenges and unilateral actions against EU Member-States as well as violations of sovereign rights and the instrumentalization of immigration, stressing the importance of a stable and secure environment that will be in the interest of both the EU and Turkey.

These actions by Turkey are part of the threats and challenges facing the EU, which endanger the security of its citizens and its critical infrastructure as well as the integrity of Europe’s borders.

According to Greek diplomatic sources, reports Euronews, the text contains clear references to fundamental principles of Greek foreign policy as well as explicit references to provocative unilateral actions by Turkey, a fact that satisfies Athens.

The final text is the product of an agreement after months-long painstaking negotiations, which of course were influenced by the developments in Ukraine after the Russian invasion.

The Greek side, in close coordination with Nicosia, always according to the same sources, succeeded in introducing a wording that refers both to the short-term challenges, but also to the long-term ones, where in fact there is an explicit reference to Turkey.

In this context, Foreign Minister Nikos Dendias, in his speech to the Council, stressed that revisionism and military aggression are a clear threat and a real danger wherever they come from and that they should be categorically discouraged and condemned.

The text contains a clear reference to fundamental principles such as the need for full respect for sovereignty, territorial integrity and independence within internationally recognized borders as well as the promotion of effective multilateralism and international order based on the rules of International Law and in particular International Law of the Sea.

At the same time, the text underlines the readiness and determination of the Member-States for mutual assistance in the event of a third party attack (Article 42.7 of the Treaty on European Union).

The text also contains references to the dangers posed by the growing dispute over maritime zones, the continental shelf and the growing aggression in the airspace, emphasizes the importance of the protection of cultural heritage and the need for the European Union’s partners to align themselves with its decisions on the Common Foreign and Security Policy.

It is becoming absolutely clear that provocations and unilateral actions against sovereign rights against Member-States in violation of international law continue. It is stressed that these actions can lead to a rapid escalation of tensions in the region. The same applies to the instrumentalization of immigration.

In order to promote the cooperation desired by the European Union, there are critical conditions that Turkey must respect. In particular, Ankara must commit itself to follow the path of cooperation, consistent de-escalation and responding to the Union’s concerns, as set out in the Declaration of the 27 Leaders in March 2021. It is recalled that with this Declaration, the Union called for Turkey to refrain from provocations, unilateral actions, illegal drilling in violation of international law.

Otherwise, the Declaration recalled that the European Union has the tools and means at its disposal to defend the interests of the Member-States and to safeguard regional stability.

It is noted that Greece gave its consent to the adoption of the Strategic Compass and at the same time submitted a unilateral national statement, in which it emphasizes that due to the challenges and threats it has been receiving for a long time, its annual defence expenditure far exceeds 2% of GDP, an objective which goes hand in hand with the reference to the Compass text for an increase in defence expenditure.

Therefore, Greece has long stressed the need to exempt part of defence expenditure from public debt rules and hopes that an agreement can be reached on this point as soon as possible.

The European Union is considering the development of a joint military force, numbering up to 5,000 troops by 2025, to deal with a series of crises without relying on the United States.

The “European Rapid Operational Force” will consist of land, sea and air assets that “could be exchanged between the permanent military forces, depending on the crisis”, according to the 28-page confidential document dated November 9, which was found in the possession of Reuters.

The EU Foreign and Defence Ministers began discussing the plan in Brussels on Monday afternoon and continued on Tuesday aiming to conclude a final document by March 2022.

Italy and France, two military powers of the EU, welcomed the plan. Crucial to the implementation of the plan is the view expressed by the forthcoming federal coalition government of Germany.

“The document presents a very ambitious plan, but it also makes concrete operational proposals. It has a good balance,” French Defence Minister Florence Parley told reporters. His Italian counterpart, Lorenzo Guerini, said it would also be complementary to NATO and strengthen transatlantic ties.

According to the plan, the EU Army will not require participation from all 27 EU member-states.