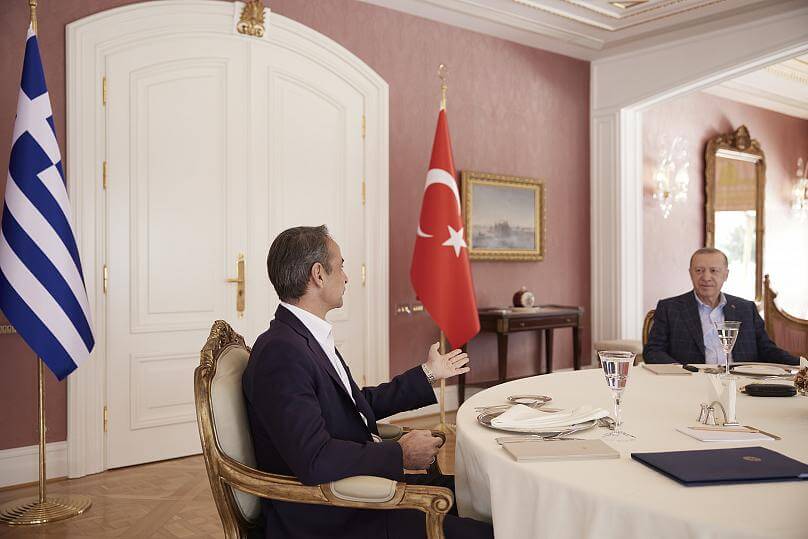 Mutual understanding that there is no reason to add problems and tensions in the Eastern Mediterranean in the shadow of the war in Ukraine were reflected, according to government sources, during the dinner of Prime Minister, Kyriakos Mitsotakis, with the President of Turkey, Recep Tayyip Erdogan. The meeting lasted two hours at the presidential residence Vahdetin on the Asian side of Constantinople.

The same people speak of a very good atmosphere, noting that after a long time the two leaders spoke as allies in the face of security challenges, which emerge against the background of geopolitical realignments, due to the war in Ukraine. In fact, they agreed to have better communication between the two shores of the Aegean at all levels. According to information, Mr. Mitsotakis agreed to the implementation of the CBM (Confidence Building Measures) next month and if successful, the two men agreed to hold the Supreme Cooperation Council of the two countries in Greece next autumn.

According to the same sources, Kyriakos Mitsotakis and Tayyip Erdogan reiterated the two sides’ firm positions on bilateral issues, however, the tone on the Turkish side was softer compared to the rhetoric adopted by Ankara in recent months.

In addition, both agreed to coordinate their movements in order to open humanitarian corridors in Ukraine, with the Turkish President even telling the Greek Prime Minister that a Greek woman had fled Hersona following Ankara’s actions.

Regarding illegal immigration, it was pointed out that the two countries must fulfill the obligations they have undertaken.

In the statements made by the Prime Minister, during his meeting with the Ecumenical Patriarch, he underlined:

“It was a meeting that, I must admit, took place in a good atmosphere. I hope we have agreed that we face so many challenges as humanity, but also as two NATO allies at this time, that is more important to focus on what unites us and less on what divides us. Obviously, we reiterated our firm national positions, but we have emphasized the need to build a positive agenda, especially in the field of economics, where I think we can make significant progress in the coming months. And if all goes well, I believe that we will be able to convene a Supreme Cooperation Council in Greece now – it is our turn to organize it – in autumn.

So I think it was an opportunity for a very open, very honest discussion and I think we laid the groundwork. I am careful in my formulations because as you understand we have big differences which are not bridged from one moment to the next. I believe that we have laid the foundations for the improvement of our relations and especially for working together on the major issues which we are currently facing. You once again witnessed tragic images from Ukraine with civilians losing their lives today. That ought to be our concern.”

The Prime Minister previously attended the Divine Liturgy of the Ecumenical Patriarchate for Orthodox Sunday.