INTERNATIONAL RELATIONS
Mitsotakis and Anastasiadis | The positions of the two leaders at the Informal Meeting of the European Council
Defence Redefined
Published on 11/03/2022 at 10:00 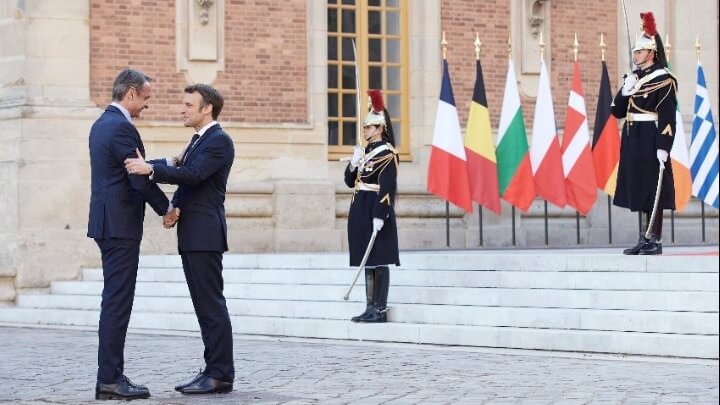 Arriving at the Informal Meeting of the European Council in Versailles, Kyriakos Mitsotakis expressed repulsion against the bombing of the maternity hospital in Mariupol and called for a ceasefire as soon as possible.

The Greek Prime Minister reiterated the need for a European response to the effects on the energy market, which he has already requested in a letter to the President of the Commission.

The Prime Minister also emphasized the importance of the issue of Europe’s strategic autonomy.

“We believe in the need for Europe to align its geopolitical power with its economic potential. And I would say that the developments in Ukraine over the last 14 days have essentially constituted the violent ‘adulthood’ of our continent. And there is the possibility right now and, I think, the consensus is being formed so that we can move much more substantially, much more effectively in this field.

And of course to exclude part or possibly all defence spending from deficit calculations, so that countries like Greece, which have historically spent more on defence spending than other European countries, are not penalized for this strategic choice,” said Mr. Mitsotakis.

The President of the Republic of Cyprus Nikos Anastasiadis pointed out to his European counterparts that Cyprus fully sympathizes with what is currently happening in Ukraine, as it has been an occupied country for almost 48 years.

EU🇪🇺 expressed solidarity with Ukraine & decided sanctions on Russia to stop the war & safeguard EU values and security. I will flag to fellow EU leaders that Turkey’s non-alignment with the Russia sanctions is self-serving and it seriously undermines the intended impact thereof.

He also stressed that the plans and strengthening of the European Union’s defence capabilities should take into account the threats and challenges that the Union and the Member-States are facing from Turkey.

He stressed the important role that Cyprus has to play in energy independence, while describing Turkey’s stance not to align with the sanctions imposed on Russia as ‘unacceptable’.

Also read: Ukrainian Issue | Third round of Ukraine-Russia negotiations has been completed – Tripartite meeting in Turkey