INTERNATIONAL RELATIONS
Ukrainian Issue | Third round of Ukraine-Russia negotiations has been completed – Tripartite meeting in Turkey
Defence Redefined
Published on 08/03/2022 at 09:54 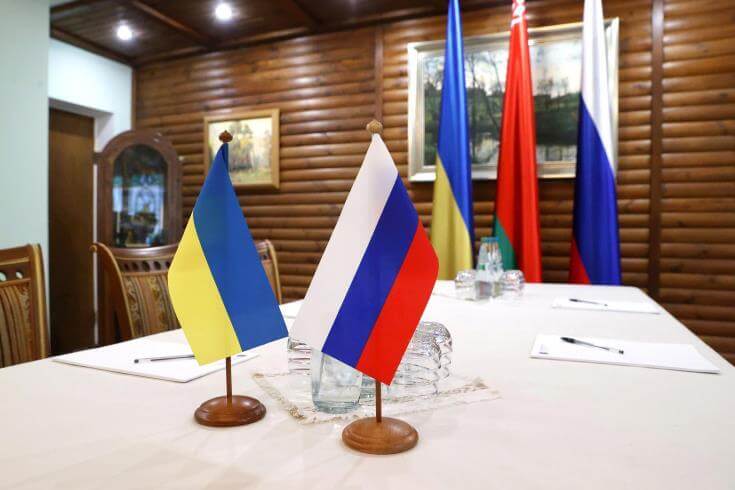 Reuters reports that, according to an announcement of the Russian embassy in Minsk, the third round of negotiations between Russia and Ukraine has been completed.

The Russian negotiators said tonight that the next round of talks with their Ukrainian counterparts will take place very soon in Belarus with the exact date most likely set today.

Another Russian negotiator, Vladimir Medinsky, said that the current, third round of Ukrainian talks “did not live up to expectations” in Moscow, while Ukrainian negotiator Mikhail Pontolyak said in a video message that “little progress” has been made in logistics in terms of civilian evacuation. However, there was no agreement that would significantly improve the wider situation.

Peshkov told Reuters that Moscow had told Kyiv it was ready to suspend military action “immediately” if Kyiv met those conditions. It was the clearest Russian statement so far on the terms it wants to impose on Ukraine to stop what it calls a “special military operation” in Ukraine.

On the issue of neutrality, the Ukrainians should make changes to the constitution according to which Ukraine would reject any goal of joining any bloc, while the Kremlin spokesman insisted that Russia has no further territorial claims on Ukraine and is simply completing the demilitarization of Ukraine, Peshkov told Reuters.

At the same time, Turkish Foreign Minister Mevlüt Çavuşoglu announced a meeting of the Foreign Ministers of Russia and Ukraine in Antalya. “Both Ministers specifically asked me to take part in these talks and to take the form of a tripartite meeting in Antalya. We concluded this tripartite meeting on March 10 in Antalya. God willing, we hope this meeting will be the turning point,” stressed the Minister of Foreign Affairs of Russia.

On the battlefield, the Ukrainians are holding in the areas around Kyiv, says the British Ministry of Defence. Ukraine’s resistance to Russian attacks in areas on the road to Kyiv remains strong, the British Ministry of Defence said in a recent nightly update. It is noted that there is ongoing resistance in the cities of Hostomel, Busa, Worzel, and Irpin.

Finally, it should be noted that the International Atomic Energy Agency announced on Monday that it had been informed by the Ukrainian authorities that artillery shells had damaged a nuclear research facility in the besieged second largest city of Ukraine, Kharkiv, but without radiological consequences as no increase in the level of radioactivity in the installation has been observed. According to the same sources, part of the Kharkiv Institute of Physics and Technology, which produces radiological material for medical and industrial use, was affected.