The Minister of Defence in “DЯ” | The 2021 Class, the future of Contracted Soldiers and the Cyprus Defence Industry – (Part A) 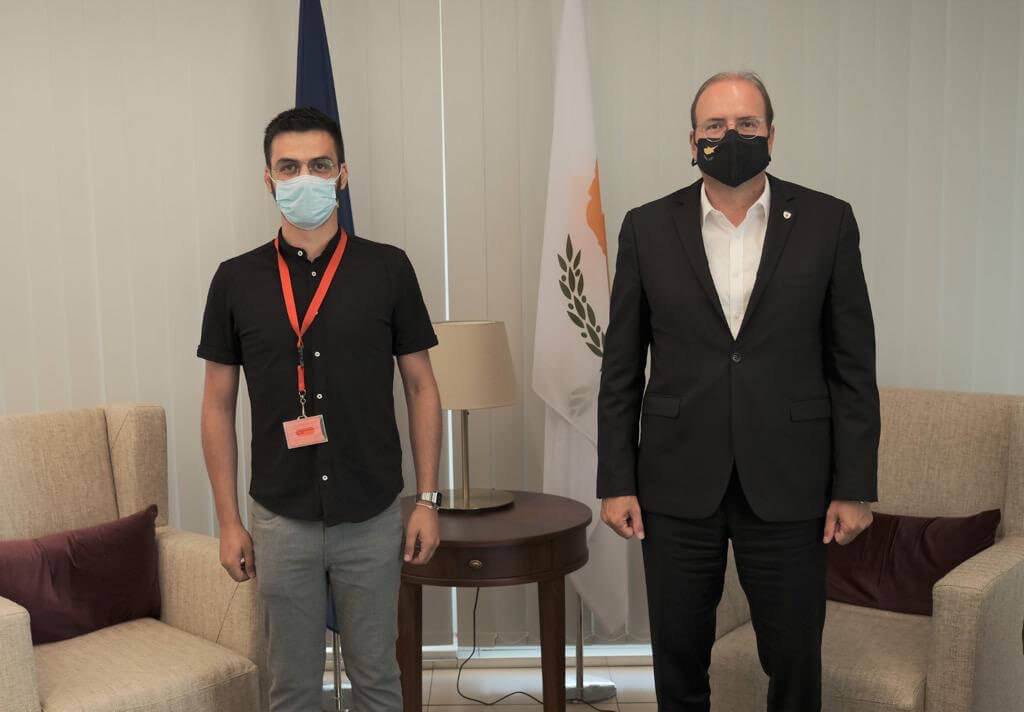 “The National Guard’s mission, which is none other than the defence of the territorial integrity and sovereign rights of the Republic of Cyprus, remained our highest priority,” Defence Minister Charalambos Petrides told Defence Redefined during our scheduled interview.

In an excellent atmosphere of cooperation and motivated by the promotion of the work of the National Guard, Defence Redefined met with Mr. Petridis at the Ministry of Defence. The Minister answered all the questions we asked him willingly and without equivocations, questions that concern all those who are interested in the Defence and Security of Cyprus.

Below we present Part A of our interview:

Dear Minister, we are now a few days prior to the commencement of this year’s classification for Class 2021. How do you assess the process that has been followed so far and what are the “challenges” that you may face next? We reasonably assume that any problems identified last year during the same procedure did not occur this year.

First of all, we must say that the classification process is ongoing as it takes place throughout the year. This year is the 2nd year in which conscripts submit their data, choices and supporting documents via the electronic platform of the Ministry of Defence. Aiming towards a user-friendly system, some improvements have been made.

Regarding this, I want to publicly express my satisfaction to all the competent bodies in the Ministry of Defence (MoD) and the National Guard General Staff (GEEF) as any possible hindrance both the constripts and their families could have experienced has been reduced to a minimum.

I believe that now everything is running smoothly and we are ready to welcome the new conscripts to the National Guard.

Is it possible for all conscripts to be stationed in their Units immediately after their classification in the Recruitment Centers, or will some of them have to be temporarily stationed in other places?

According to the planning and instructions given by the National Guard General Staff, the Class of 2021 will be presented at the Recruitment Centres (KEN) during the days and hours listed in their classification letters and on the same day, after the completion of the required procedures, they will be transferred to their Units, given this possibility.

The benefit of this process is particularly important because the immediate placement of conscripts in their Units leads to faster enactment of their training and operational readiness.

Also read: New recruits’ vaccination | Here is the plan of the Ministry of Defence (MoD) – What applies to sports tests

The National Guard proved that despite the problems created with the coronavirus pandemic, it still remains combative and effective. It should be noted here that the joint exercise “NIKITIS-DIMITRA” was normally conducted last year in the midst of the pandemic. How do you feel as a political leader of the National Guard for the effectiveness shown?

Undoubtedly, as in the whole society, so in the National Guard, the coronavirus imposed many restrictions both for the protection of the personnel and the maintenance of the combat force. However, the National Guard’s mission, which is none other than the defence of the territorial integrity and sovereign rights of the Republic of Cyprus, remained our highest priority.

Once the pandemic broke out, the National Guard provided efficient assistance where and when requested, mainly with providing personnel with the task of monitoring the implementation of the measures and guarding hotel units. It should be noted that in 2020 the large-scale, annual tactical exercises were held as well as other joint exercises with foreign countries, highlighting the first quadripartite exercise “EUNOMIA” with Greece, France, Italy, Cyprus.

I can only express my satisfaction towards the National Guard leadership and the personnel for the professionalism they showed under really difficult conditions.

What is your message to the newly-recruited conscripts, who will be called in a few days to join the National Guard Camps, but also to their parents?

We must all understand that serving the National Guard is an honor and a debt to the semi-occupied homeland. It is an obligation against the sacrifices of our ancestors. A part of our contribution to the next generations. The new conscripts need to face it as a new challenge that will provide them with experiences and skills for the rest of their lives.

From our side as the Ministry of Defence, we will stand by the side of the conscripts and their families so that the time spend in uniform will be useful, productive and substantial.

Regarding the extensively-discussed issue of the Working Hours Regulation for the Armed Forces personnel, what should the latter expect in the following period? We note, of course, that the Ministry submitted the relevant Regulations to the preceding Parliament and now their vote by the new Parliament is expected.

The regulation of the personnel’s working hours is a top priority for the Ministry of Defence. To this end, after a careful study, taking into account the proposals of the Officers’ and NCOs’ Associations, we submitted the relevant regulations to the House of Representatives last February. We expect the new Defence Committee, once the parliamentary works commence, to convene and discuss this matter hoping it will be approved soon.

Also read: Regulation of Working Time in Cyprus’ Army | A vision or reality?

What plans has the Ministry set regarding the regulation of Contracted Soldiers’ working hours?

I would like to emphasize that we make the necessary adjustments where problems or issues that could be improved are identified. The preparation of regulations for the Contracted Soldiers is being studied as well.

The Ministry, as is well known, in addition to the various measures to combat draft avoidance (e.g. by athletes), made important decisions which make the reservists routine activities more productive. However, in his reports, the Auditor General had spoken about draft avoidance shown by a large number of reserves, which is in fact witnessed over time.

What are the results so far in terms of the measures that have been taken to combat this phenomenon and what are the plans for the future?

Reserve forces have an essential role to play in the defence plans of the National Guard by completing the manning of the Units. Indeed, a significant number of reservists unjustifiably evaded the obligation to rejoin the reserve institution. We proceeded in this way by taking measures which, as a result, proved to be correct in mitigating the phenomenon. Most of the cases concerned people who were studying abroad and upon their return to Cyprus did not inform the National Guard as they should.

To eliminate this phenomenon last January, we called the non-enlisted reservists to go and present themselves at the Enlistment Offices so as to make all the necessary enlistment arrangements. Since then, 7791 reservists have responded and acted accordingly, while another 1718 have renewed their temporary service deferral with new supporting documents.

Furthermore In cooperation with the Cyprus Police, an electronic connection has been made allowing Police Stations to issue and serve Individual Service Notifications to non-enlisted reservists who visit the Police stations for any reason. Since the implementation of this measure, 353 Individual Service Notifications have been served. In addition, the extension of the control system of non-enlisted reservists to the different entrance and exit points of the Republic (airports, ports and checkpoints) is expected.

Our ultimate goal is to change the mentality in the way our fellow citizens respond to the reserve force, and not their inconvenience.

The participation of Cyprus small and medium-sized enterprises and organizations in projects approved from the European Defence Industrial Development Programme (EDIDP) is already a fact. Does this, in combination with the Ministry’s “ATHENA” action and the participation in Permanent Structured Cooperation (PESCO) programs, secure Cyprus a place on the map of the European Defence Industry?

Clearly, the participation of Cypriot companies in Research and Development programs contributes to competitiveness and the upgrading of their capabilities in the sector, as for the first time they are placed on the map of the European Defence Industry. Through participation in joint European programs, Cyprus companies, in addition to the financial benefits, achieve both their “networking” with the European Ecosystem of Defence Research and Development and the acquisition of experience and know-how that will gradually lead to their consolidation in the field. The success of Cyprus companies gives the opportunity to employ many talented young scientists.

Do you believe the Defence Industry sector should receive support from the state, since in addition to the contribution to the development of the economy, there are serious benefits in the field of Research and Development (R&D) with the National Guard being upgraded operationally.

Since 2019, the Defence Ministry practically supports the sector in question. Specifically, the efforts to strengthen the sector are directed in 3 different axes:

Specifically, the Ministry has supported 6 project proposals with the participation of Cyprus companies in the EDIDP calls, 5 of which have been selected for funding from a total of 18 proposals. Seven companies and research institutes from the Republic of Cyprus participate in these projects. In addition, the Ministry has allocated approximately 235,000 euros to support and co-finance these proposals, while Cyprus companies and research institutes will receive a total of 3.4 million Euros from the European Commission, a fact showing that for each euro spent by the Ministry to support their participation, 15 euros will be returned to the local economy.

(1) In June 2019, the MoD announced the Action “ATHENA-2019” for Defence Research, Innovation and Technological Development, with the participation of Cyprus Universities and small and medium Research and Development enterprises.

(2) Following a competitive process among 9 project proposals, 2 with the highest score were selected.

(3) “THESEUS”: Development and demonstration of an electronic situation awareness and decision support system. The University of Cyprus is the contracting body.

(4) “DroneEye”: Development and demonstration of an intelligent system for collecting information, detecting multiple targets and drones, while being able to neutralize them by electronic means. The Open University of Cyprus is the contracting body.

For the first time, in these types of plans made by the Republic of Cyprus, a proposal of the MoD has been included. Specifically, the proposal concerns the subsidy of project proposals that will be announced in collaboration with the Research and Innovation Foundation regarding the development of dual use technologies and applications as well as the upgrading of the laboratories of Research Centers and Companies. With this proposal, a total budget of € 3,000,000 will be allocated by the Recovery and Resilience Fund, with the ultimate goal of developing capabilities and strengthening the competitiveness of Cyprus Companies and Research Centers.

Part B of our interview with the Minister of Defence, Charalambos Petridis, will be published on Saturday 03/07.