The damage to “Kemal Reis”, the history of naval incidents in the Aegean and the next day | VIDEO-PHOTOS 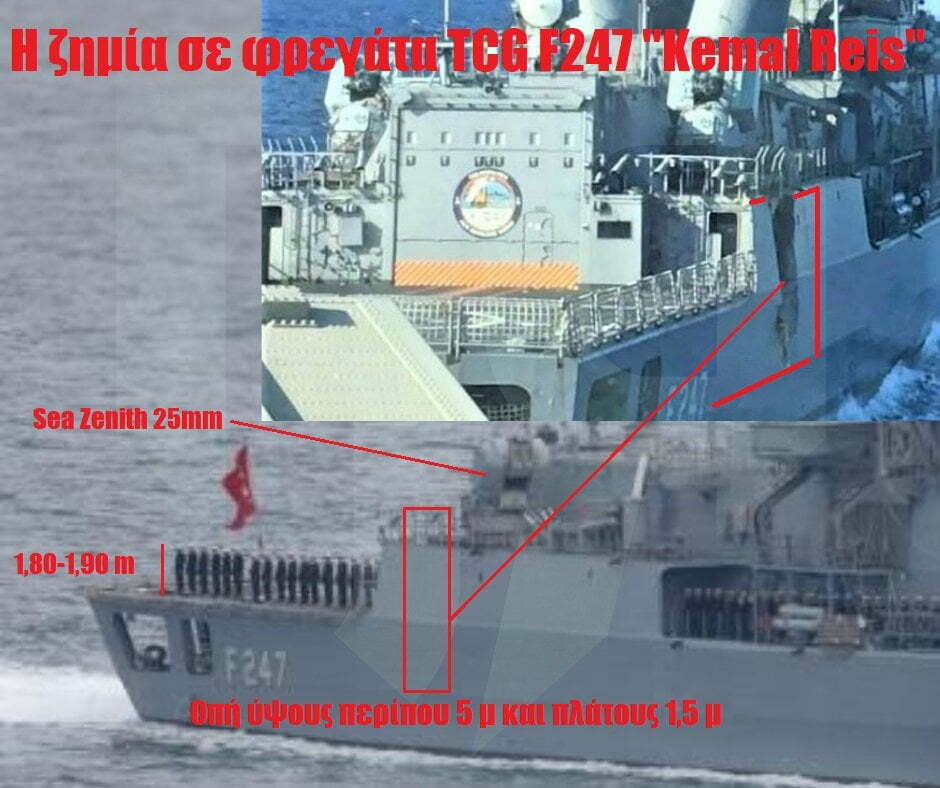 In the last few days we have been closely monitoring what is happening regarding the Greek-Turkish relations and especially the incident between the collision of the Greek frigate type “S” “LIMNOS” (F451) with the Turkish type MEKO-200TN, “Kemal Reis” (F- 247).

The incident, as we had informed you responsibly (and following the confirmation from reliable sources), took place on August 12, but since then there has been no official confirmation from the Hellenic National Defence General Staff (HNDGS). Of course, no one can deny the news anymore, since photos that clearly show the damage to a Turkish frigate have been circulating on the internet for a few days now.

As shown in the photo above, the impact was caused on the starboard (right) side of the KEMAL REIS at the height of the hangar that can accommodate a helicopter (S-70B Seahawk or AB 212 ASW) and near one of the three CIWS Sea Zenith 25mm by Rheinmetall (formerly Oerlikon Contraves). The cannon in question is the equivalent of the Phalanx (MK-15 CIWS) which equip the Greek frigates MEKO 200HN and S.

There has been no official confirmation of the amount of damage caused to the Turkish frigate so far (e.g inside the ship and its various systems), but it is a fact that the vessel maintained its cruising ability immediately after the collision. The time it will take to repair the frigate in question will depend on the extent of the actual damage, but in each case the damage was significant. Optical examination of the photos reveals an estimate for a hole on the starboard side of about 5m high and about 1,5m wide.

The incident is considered by the Greek side as an “accident” and is attributed to the false actions of the Turkish governor since, due to the wrong maneuver, he was “vertically” in the course of “LIMNOS”. “LIMNOS”, thanks to the skills of the Greek governor Lieutenant Commander Giannis Saliaris and his staff, avoided the worst, i.e. to suffer serious damage. According to media reports, there is a relevant video which was used by the Greek government in order to demonstrate the Turkish guilt to representatives of other countries.

The Minister of National Defence Nikos Panagiotopoulos expressed his congratulations to the governor of “LIMNOS” via a radio communication which was not refuted (or confirmed) by the HNDGS. As mentioned above, the HNDGS avoided taking an official position on the incident, which in our opinion should have been done especially after the publication of the relevant photos. The official position on the accident (as the Prime Minister hinted at the speech immediately after the incident) would put an end to various scenarios that do not correspond to reality.

The history of ship collisions in the Aegean

The incident of the “light collision” was certainly not the first to occur between vessels of the Greek and Turkish navies, but it is the first (according to our research) with vessels of this size (displacement of about 3500 tons).

In addition, on May 4, 2018, a Turkish merchant ship, according to an announcement by the General Staff of the Navy (GEN), “approached and collided the gunboat “Armatolos”, in the sea area southeast of Mytilene, within the National Territorial Sea, violating the Convention on the International Regulations for Preventing Collisions at Sea (COLREG), as the merchant ship was arriving.”

A more serious incident was recorded on March 11, 2020 where according to the official announcement, “at 05:45 today, in the sea area of ​​Kos, in Greek territorial waters, a Turkish coast guard vessel carried out an intended collision with a patrol boat of the Kos Port Authority, with a clear intent to collide with that vessel. It is noted that the patrol boat was carrying out an official patrol in the wider sea area on the Greek border. As a result of the collision, minor damage was caused to the patrol boat, while no crew member was injured.”

The vigilance to deal with any attempt of “revenge” or another act by Turkish vessels is taken for granted in the sense that the crews of the warships are constantly on alert while on mission, for managing all possible scenarios.

From August 12 until today, various diplomatic and other actions have been taken in order to de-escalate the crisis caused, but the research vessel ORUC REIS is still “sailing back and forth” the Greek and Cypriot Exclusive Economic Zones (EEZ) accompanied by a small fleet, with Ankara invoking the illegal NAVTEX explorations until 23 August 2020.

Two additional Navtex for drills with live fire northwest of Nicosia for the periods between 19-21 and from 24 to 28 August were issued by Turkey, in response to the Navtex issued by the Republic of Cyprus. Cyprus’ Navtex was issued in order to denounce the illegal operations of the drillship “Yavuz” in the Cypriot Republic’s EEZ.

The Turkish provocation and illegal actions have been confirmed through satellite photos of the Israeli company ImageSat Intl. The fleet escorting the Turkish research vessel ORUC REIS, consisting of 2 tugboats, 3 Barbaros class frigates (MEKO 200), 2 Burak class corvettes (former D’Estienne d’Orves-A69) and 2 G-CLASS frigates (upgraded Oliver Hazard Perry class frigates), have been given in more detail through the spotlight. The total firepower of the fleet in question amounts to a total of 40 Harpoon guided missiles (frigates) and 8 Exocet Guided missiles (corvettes).

#Thread 1/3: #Turkey sends a research vessel to the disputed area with #Greece.

From the pictures, a Greek “S” type frigate can be also seen, being close to the fleet and monitoring its activity. In addition to surface vessels, the presence of submarines of both the Greek and Turkish Navies in the area is taken as granted.

The operational readiness of the Greek Armed Forces and especially of the Navy was and still is as high as possible. This should be a reminder to the respective political leadership in both Greece and Cyprus regarding the value of the combat power of the armed forces.

In Greece, a country marked by major economic shocks in the last decade, the Armed Forces actively prove that they are a deterrent and security factor in the region. Despite this, however, the state’s role in strengthening their efforts remains catalytic.

The purchase of new surface vessels with anti-submarine war and area air-defence capabilities, purchases of modern torpedoes for full operational utilization of the capabilities of submarines 214 (and upgraded 209) are some of the must-do actions listed indicatively. Further analysis is not needed as these were stated many times by the Greek media.

Reference to the National Guard and its options will be made in forthcoming articles. For the time being we will quote a translated excerpt of the former Chief of Defence (CHOD) Lt. Gen. Ilias Leontaris from an interview he gave to Marios Poullados and Dr. Lambros Kaoullas in the newspaper “Simerini” last March, with the title “Defence is an expensive sport, but freedom is not free” :

“… In the Armed Forces everything we think of today, we must have the ability and patience, of course, to see it perform in the next 3-5 years. And this is the main reason why pausing armament programs creates gaps, accumulates demands and of course more money is needed to restore military balance.

It is the responsibility of the Chief, therefore, to promote these requirements through Defence Planning and Programming, to prepare the Multiannual Armament Program based on the above and of course to take into account the Cost of Life Cycle of each Weapon System.

In the same context, of course, the same applies to the requirements in the fields of personnel and infrastructure, without excluding the techno-supply chain to support the daily life of the living organization called National Guard. Defence is an expensive sport… “but freedom is not for free”.