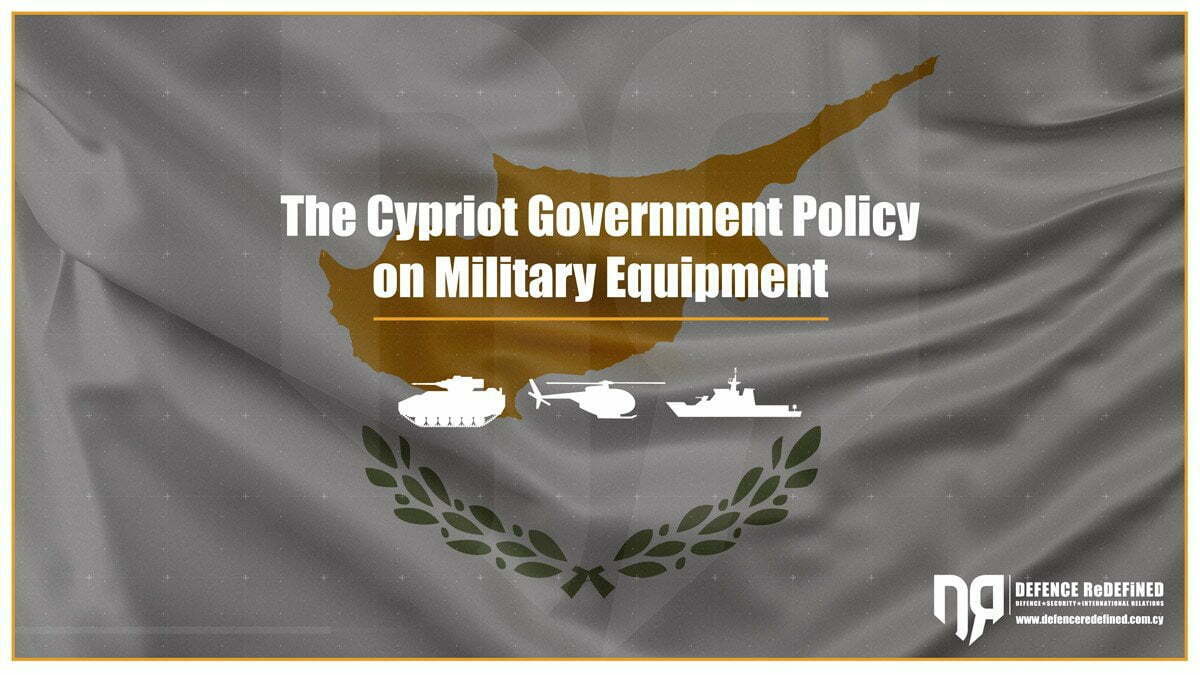 With its establishment, the Cypriot Army (CA) was equipped with light weapons of World War II (WWII) and maintained this arsenal until 1964.

Immediately after the Turkish-Cypriot uprising in December 1963 and the hostilities between Greeks and Turks, the then Cypriot and Greek Governments realized the threat coming from Turkey (Before the end of the EOKA struggle, Turkey implemented the Plan of the Turkish Special War Office for the Recovery of Cyprus and according to what Ismail reveals in his book “IN REALITY NO ONE WAS ASLEEP”, it turned out that everything was well planned). Specifically, Turkey had gathered ammunition and armaments in various places controlled by Turkish-Cypriots and trained both men and women with its Officers in Turkey and Cyprus.

After the enactment of the Turkish-Cypriot uprising, on January 2, 1964, the Cyprus Republic (RoC) began to be equipped with weapons from Egypt and Greece. In March 1964, the Cypriot government created the National Guard (NG). In the same year we had the hostilities in Moutallos, Paphos, and in August 1964 the ones that took place in the area of ​​Tillyria where the Turkish Air Force bombarded the NG personnel and civilians in the surrounding villages.

Following the Turkish aggression, in September 1964 an agreement was signed between the RoC and the USSR on the purchase of T-34 tanks, BTR armored personnel carriers, 100 mm artillery guns, SA-2 anti-aircraft (A/A) missiles, 14.5 mm A/A guns, Krinof machine guns 12.7 mm and vehicles for the Army. Also, the agreement was providing for 6 Torpedo-boats for the Navy. Almost all the military equipment, with the exception of a part, was WWII weapons.

After a break of 39 months, on November 15, 1967, the events in Kofinou village had as a tragic consequence the departure of the Greek Army Division that was sent to Cyprus in 1964.

On July 15, 1974 the treacherous coup d’etat of D. Ioannidis followed and the catastrophic Turkish invasion on July 20, 1974. It is worth noting that neither the reinforcements from Greece, nor the Greek Air Force or the two Navy submarines that were in the sea area west of Cyprus were employed. Also, the National Guard’s General Staff reserves were not used against the Turkish forces on the bridgehead at the beginning of the invasion.

It is commonly accepted that Cyprus had been betrayed. The Turks made a landing and with repeated violations of the July 22 and August 16, 1974 ceasefire, they occupied 37 percent of the territory of the RoC with all the crimes committed against the population by Turkish officers and soldiers. 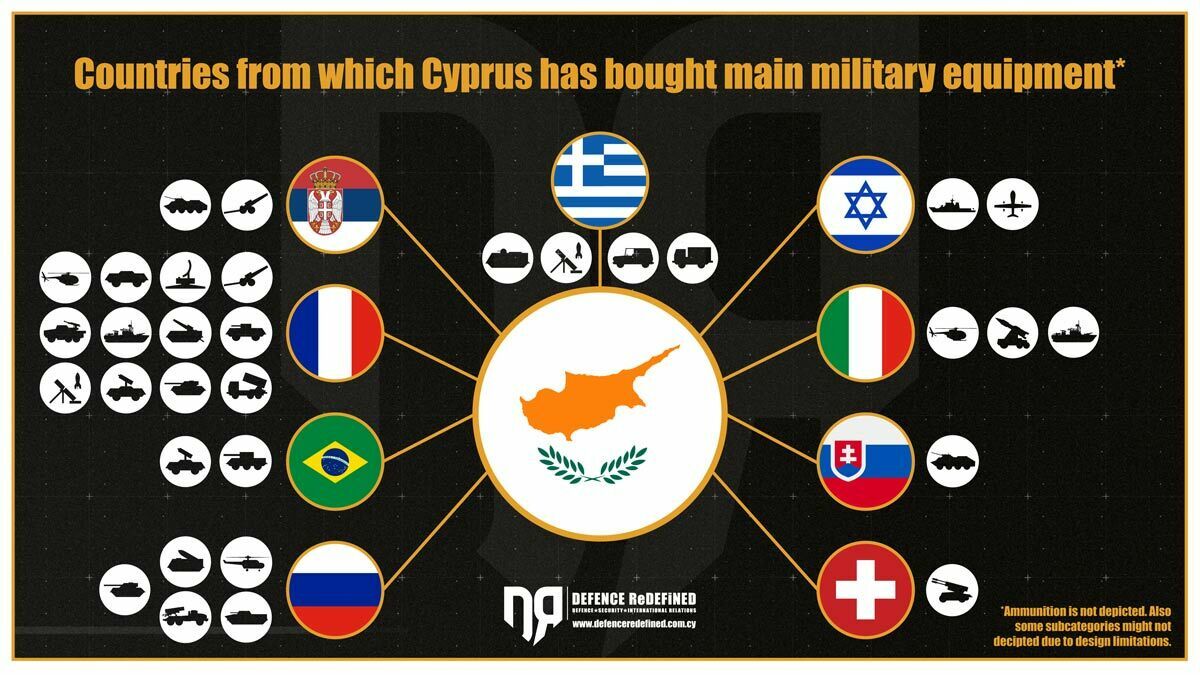 Main military equipment providers to the Republic of Cyprus. See the legend below

After the Turkish invasion, the RoC could not buy weapons other than from Greece, from which it took Anti Tank (A/T) Recoilless Cannons and MILAN A/T missiles in 1979. Also, it bought Man-portable air defence systems (MANPADS) from another country. The first country to open its war industry to Cyprus was Yugoslavia, followed by Brazil, France and Russia. After a few years, other countries supplied the Roc with weapons and ammunition.

Today, the United States has lifted its 1987 arms embargo (subject to conditions) against the RoC, during which in some cases the US had put pressure on other countries so as not to supply Cyprus with modern weapon systems. As for the negative role of the United Kingdom, I will not refer to it here because it is a separate major chapter in its own right. 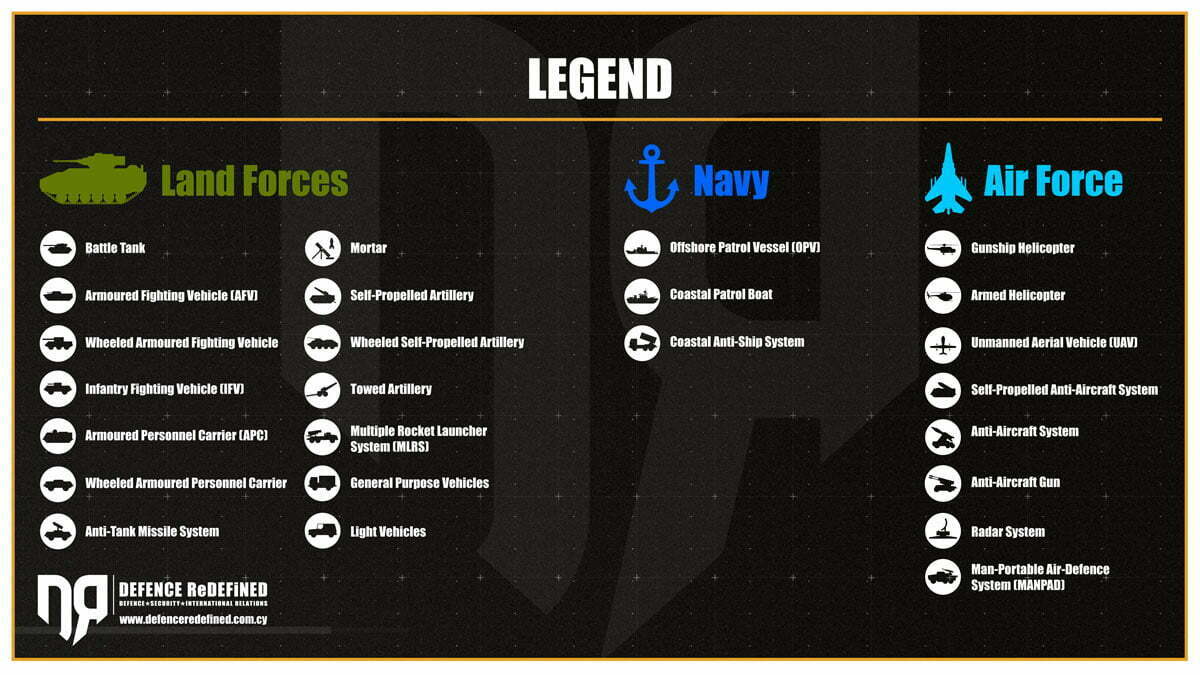 Since 1981, serious equipment has been acquired, but in a random and inconsistent manner, which, if presented graphically, will show the large and abnormal deviations. I will not go into details for obvious reasons.

From the above, however, it is easy to conclude that a series of mistakes were made by the RoC and the top technocrats of the defence, namely:

1. While the Turkish intentions and the threat were visible, after the first equipment of 1964 the RoC did not buy and modernize any weapon system other than RACAL radios.

2. After the Turkish invasion, the military equipment was not made smoothly and the weapon systems were replaced after some (2-3) decades depending on the current state of affairs. To this day, weapon systems of WWII are maintained as well as others that cannot be modernized or ones whose supply chain is cut off.

3. There is systems panspermia in the same category of weapon systems.

4. Weapon systems that had been devalued for years by their countries of manufacture were purchased.

5. Depending on developments of the Cyprus issue talks, military equipment was reduced sharply and in some cases completely stopped.

6. In many cases the political leadership urgently imposed the supply of weapon systems by the method of urgency, while in the market there were more modern and more effective weapon systems.

7. The construction of a Navy with combat capabilities and the Air Force was completely neglected.

8. The technocrat leaders of the NG did not react to the decisions of the politicians in acquiring weapon systems for obvious reasons.

9. The Defence Fund (DF) for the emergency needs of the NG, established in 1984 by an overwhelming majority, was allocated for other state needs and not for its intended purpose. If the amounts of the DF were available for the purpose for which they were collected, today the RoC would have a Navy and an Air Force.

10. The lack of political will to create a strong NG is indisputable.

In order for the issue of NG armaments to be put in its proper dimension, the RoC must immediately set up an institutional body (e.g. National Security Council) which will draft the National Strategy, the Defence Policy and on that basis the technocrat army officers will be able to cover their military needs without any interference from politicians.