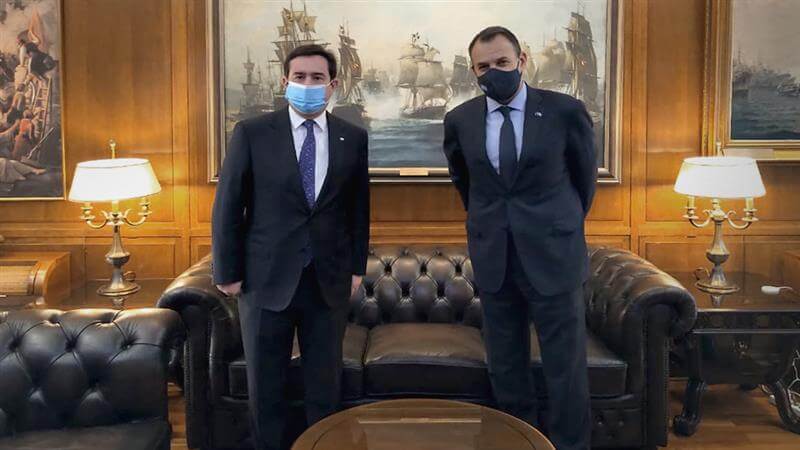 Today “we mark a special turning point in immigration with the disengagement of the Armed Forces” – as of October 31, 2021 – from the daily management of the issue. This was emphasized today, Tuesday, January 4, by the Minister of National Defence, Nikos Panagiotopoulos, speaking at the Pentagon, at a joint event with the Minister of Immigration and Asylum, Notis Mitarakis.

Mr. Panagiotopoulos explained that since the beginning of the immigration crisis, the Armed Forces have been managing daily issues related to food, accommodation centers construction, the reception of refugees and immigrants, health care, and the transportation of materials.

The Minister noted that the Armed Forces managed to cope with absolute success by assisting the state in managing “a complicated, complex issue with subtle nuances.” He clarified that “if the need arises, the Armed Forces will be there again.”

As Mr. Panagiotopoulos said, today “there is an organized management plan of the Ministry of Immigration”.

For his part, the Minister of Immigration and Asylum clarified that this year the flows are reduced “by 99% compared to the immigration crisis of 2015”. “As a result,” he added, “we reduced the number of accommodation centers that operated in our country two years ago from 121 to 34.”

Mr. Mitarakis pointed out that we managed to “relieved, in essence, the islands and mainland Greece from the effects of the flows.”

“We have completed”, he continued, “the reception system providing, on the one hand, the appropriate living conditions for a short stay in the remote areas of the country and on the other hand a strong sense of security for the residents, for our staff and for the local communities.”

“Immigration,” he said, “remains a challenge that requires strict implementation of the national strategy approved by the Cabinet, vigilance, and hard work.”

“We all remember the crisis of Evros and the determination shown by our country,” said the Minister of Immigration and added: “A similar effort to instrumentalize human suffering cannot be ruled out in the future in Evros and our islands but will find us ready as in 2020.”

He expressed his deep gratitude to the Minister and Ministry of National Defence, the Hellenic National Defence General Staff but also to the men and women of the Armed Forces “for their substantial contribution over the past seven years to a crisis that our country encounters.”

Mr. Mitarakis handed over two honorary plaques to the Ministry of National Defence and the Hellenic National Defence General Staff for the assistance of the Armed Forces in the management of the immigration crisis.