INTERNATIONAL RELATIONS
K. Mitsotakis | In Washington with a full agenda for meeting with Biden
Defence Redefined
Published on 16/05/2022 at 09:00 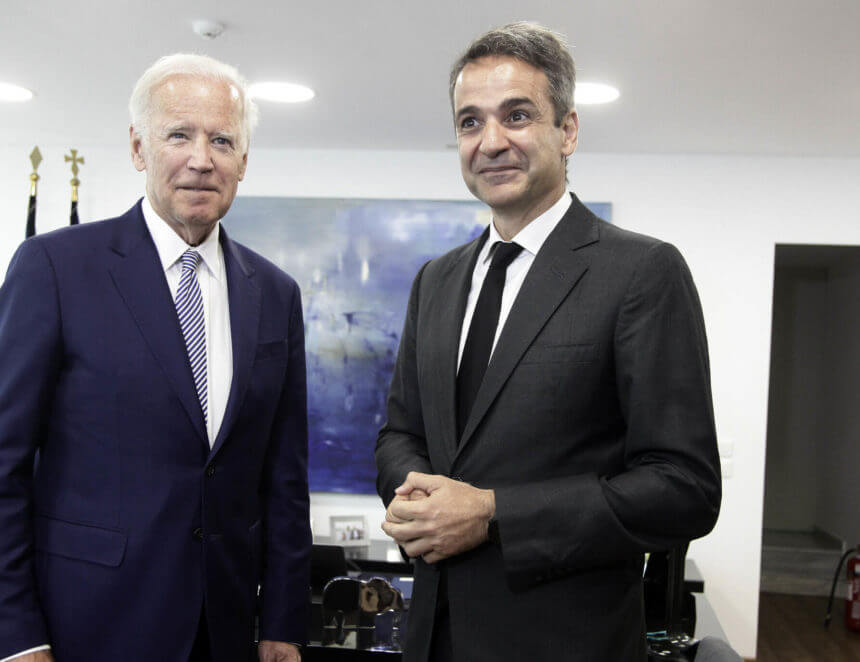 Almost two and a half years after his meeting with the then President of the United States, Donald Trump, Kyriakos Mitsotakis will visit the White House for the second time in his term, at the invitation of the US President, Joe Biden.

The meeting of the Greek Prime Minister with the US President, Joe Biden, at the White House is important on many levels, according to government sources.

The same sources note that at a critical geopolitical juncture partners and allies recognize Greece as a reliable and consistent partner, a factor of stability in the region in an era of instability and uncertainty, a strong, determined Greece, firm in its positions. In fact, the role of Greece as a factor of stability is sealed with the vote taken a few days ago on the amendment of the Greece-US Mutual Defence Cooperation Agreement (MDCA).

The agenda of the Mitsotakis-Biden meeting

The meeting of the two leaders is expected to address a wide range of bilateral and non-bilateral issues. In the context of the Greece-US strategic partnership, including the cooperation of the 3 + 1 group, issues of bilateral interest will be raised, including the Russian invasion of Ukraine – a critical issue for the West – in which the government emphasizes that it has taken a clear and unequivocal stance from providing humanitarian and defence support and practically demonstrating its solidarity with endangered partners, but also putting into practice international law in the European and allied response to the Russian invasion of Ukraine. In addition, international and regional issues are expected to be discussed.

Government sources confirm that the issue of Turkish provocation will also be raised. After all, Kyriakos Mitsotakis has already raised the issue of Turkish overflights over Greek territory as an issue that undermines and endangers NATO cohesion at a time when unity is required.

The energy issue will also be on the agenda, as Greece can become the hub for the transport of gas and clean energy from the Middle East and the Eastern Mediterranean to the Balkans and Southeastern Europe, therefore actively contributing to Europe’s independence from Russian fossil fuels, but also in diversifying energy routes and in Europe’s energy security.

In this context, moreover, the floating offshore terminal in Alexandroupolis enhances the importance of the region not only militarily, but also energetically and commercially. As reported, US investments in Greece, such as those of Pfizer and Microsoft, will have a prominent place in the contacts of the Prime Minister in the US capital.

Kyriakos Mitsotakis has a full schedule, which will start at noon on Monday in Greece with an interview on MSNBC. The Prime Minister will then take part in an open discussion at Georgetown University. The meeting with the US President will take place on Monday night, at noon in Washington.

On Tuesday, Kyriakos Mitsotakis will meet in the Congress with the Speaker of the House of Representatives, Nancy Pelosi, and at 6:00 in the afternoon he will address a joint session of the Congress. Nancy Pelosi will give a reception in honor of the Greek Prime Minister, with Kyriakos Mitsotakis having the opportunity to meet several Senators to inform them about the developments in the Eastern Mediterranean and the Aegean.

On the same day, he will meet with the US Vice President, Kamala Harris, while he will have dinner with representatives of Greek-US organizations before returning to Greece.