EU Summit | Mitsotakis – Anastasiadis to brief the EU on Turkish provocations
Defence Redefined
Published on 21/10/2021 at 13:00 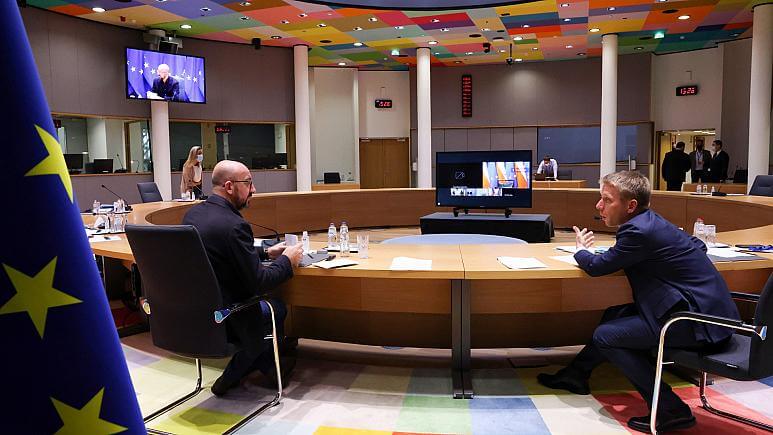 Kyriakos Mitsotakis is in Brussels today in order to initially take part in the European People’s Party (EPP) meeting, followed by the meeting of the European Council.

Illegal immigration, the energy crisis and Turkey’s provocations in the Eastern Mediterranean are high on the agenda.

The Prime Minister will stress the Greek positions both to the heads of states who will participate in the meeting of the European People’s Party and in the summit of EU leaders.

Regarding the illegal immigration issue, he is going to repeat the need to amend the Dublin pact, to present in detail the current situation in the reception and hospitality centres in Greece, to clarify that the Greeks will continue to effectively guard the Greek borders, which are also European, and to underline Turkey’s obligation to implement its agreement with the EU.

Also read: EU Summit in Slovenia | The AUKUS agreement on the agenda of European leaders

At the same time, he will have the opportunity to condemn once more the behaviour of Ankara against two EU Member States, Greece and Cyprus, reiterating that these provocative and illegal actions of the neighbouring country undermine peace and stability in the region.

On the other hand, the Prime Minister will emphasise our country’s firm commitment to international law, the Law of the Sea and the European acquis, and especially in terms of the Cyprus issue, he will underline that any discussion on a two-state solution is rejected.

One of the key issues to be discussed by European leaders is the energy crisis.

The Prime Minister promotes and will put on the Summit table the idea of ​​the common gas market and the need to adopt long-term measures.

At the core of the Greek proposal, with which Italy agrees, is to consider purchasing gas at the European level in order to gain increased purchasing power against the large suppliers and ultimately ensure lower prices for consumers.

In addition, the Prime Minister is expected to note that Europe must find different sources of supply, and therefore Turkey’s provocation in the Eastern Mediterranean is particularly relevant to Europe.

At the same time, government sources point out that Greece is one of the first countries that has already made moves to alleviate consumers and has implemented the entire “toolbox” of the Commission.

The President of the Republic, Nikos Anastasiadis, participates today and tomorrow in the European Council Summit in Brussels, during which he is expected to brief his counterparts on the latest developments in the Cyprus issue and the latest provocative behaviour of Turkey.

According to the Presidency, among the topics to be discussed at the Summit are efforts to tackle COVID-19, digital transformation, immigration, trade and the EU’s foreign affairs.

In a recent written statement, Government Spokesman Marios Pelekanos, who is accompanying President Anastasiadis to Brussels, said that the President of the Republic will brief the EU Heads of State and Government at the European Council on all developments concerning the Cyprus issue, and in particular on what was discussed during his informal tripartite meeting with the UN Secretary-General and the Turkish-Cypriot leader in New York as well as the delay in the appointment of a special envoy for Turkey’s latest provocative behaviour in the Cyprus EEZ and the actions of Turkey in violation of the UN resolutions in the enclosed city of Famagusta.