Joint statements of Tripartite meeting of Greece, Cyprus and Egypt in Athens – VIDEO
Defence Redefined
Published on 19/10/2021 at 16:31 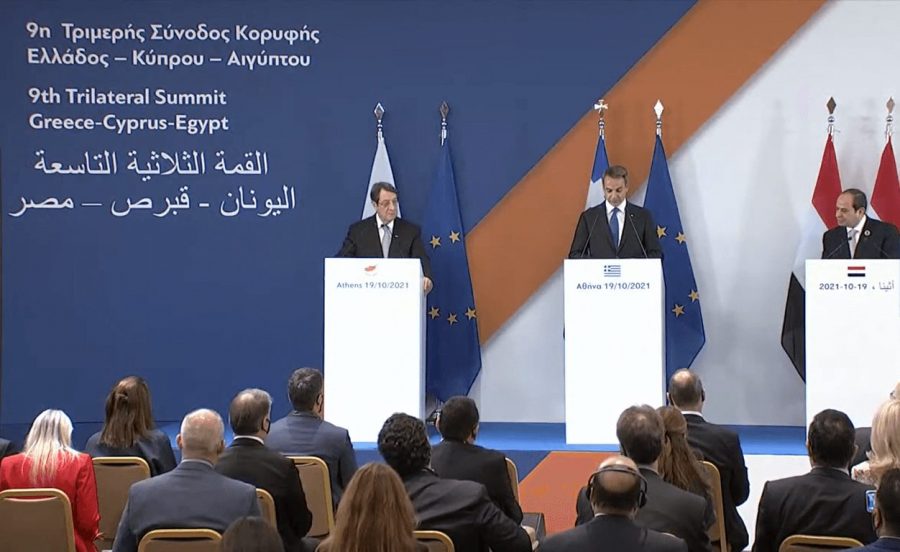 Issues of energy, security, regional developments, tourism, research, economy, the environment and health were discussed during the session. Reference was made to the three countries’ electricity interconnection and the strengthening of the Eastern Mediterranean Energy Corridor.

The joint condemnation of the Turkish actions in the Cyprus EEZ as well as of the illegal Turkish overflights in the Aegean was particularly intense. Any action disrupting the legal operation of vessels in the area in delimited areas under the 1982 Convention on the Law of the Sea (UNCLOS III) has been condemned. In addition, support was jointly declared for a comprehensive and just settlement of the Cyprus problem on the basis of UN Security Council resolutions.

Regarding regional developments, the three parties said they support holding free elections in Libya in December, while re-condemning the illegal Turkish-Libyan memorandum.

In his statements, the Prime Minister of Greece, Kyriakos Mitsotakis, stressed the contribution of the three states in the management of immigration, emphasizing that Greece with the silent help of Egypt saves lives from traffickers’ networks. The Greek Prime Minister even stated that Greece and Cyprus belong to the same Nation and Greece and Egypt to the same community with reference to the cities of Naukratida, Alexandria and Cairo and the timeless Greek presence in Egypt. As part of the joint actions against the pandemic, reference was made to the donation of 250,000 vaccine doses to Greece to Egypt.

In his statements, the President of the Republic of Cyprus, Nikos Anastasiadis, once again condemned the Turkish position on a two-state solution and stressed the benefit of even Turkey itself deriving from the solution of the Cyprus problem. He stressed the commitment to dialogue and international law. It is worth noting that as stated by the President of the Republic, before the end of the year a permanent secretariat of the tripartite cooperation will be established in Nicosia. A similar move has been made with the tripartite cooperation between Greece – Cyprus – Israel, a fact that shows the key role of Cyprus in the construction of these regional schemes.

Egyptian President Abdel Fattah al-Sisi, in his statements, stressed the importance of the energy dimension of the cooperation, stating that it is the prelude to the energy interconnection with the rest of Europe, while in terms of the Eastern Mediterranean gas forum, he stated that all states should exploit its energy resources in accordance with the principles of International Law. Reference was also made to the burning regional issues of Syria, Palestine and Lebanon, while the need for stability was stressed.

As announced, the 10th Summit of the three states will be held in Egypt.