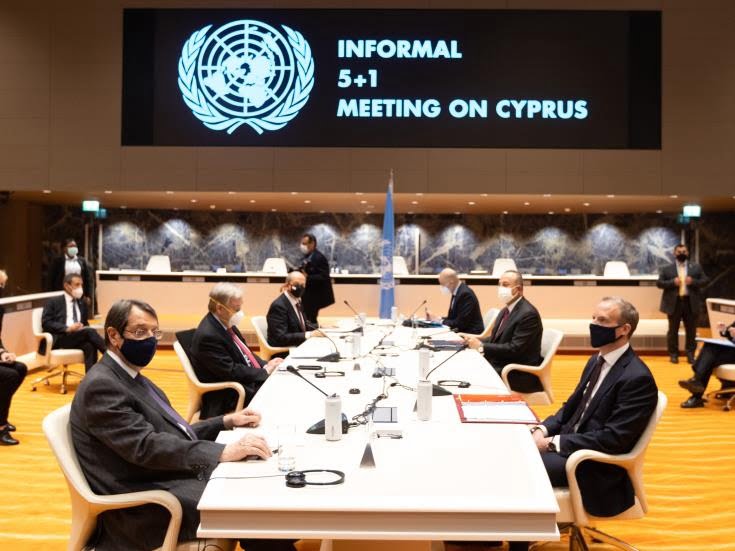 The consultations in Geneva are underway, now on their second day, in the context of the informal 5 + 1 conference on the Cyprus issue.

The talks of the participating parties take place today, Wednesday, at the UN headquarters in Geneva, at the Palace of Nations, under the auspices of the head of the United Nations, Antonio Guterres. The leaders of the two communities in Cyprus – President Anastasiadis and Ersin Tatar – participate in the talks along with the Foreign Ministers of the three guarantor powers, Greece, Turkey and the UK, namely Nikos Dendias, Mevlut Cavusoglu and Dominique Raab.

By 11am Cyprus time, 10am local time, the participants arrived at the Palace of the Nations for the informal conference, where they were welcomed by Mr. Guterres.

The conference began with the plenary session of the participants. The UN Secretary-General will then hold bilateral meetings with each of the parties.

Tonight, at 22:00 Cyprus time, 21:00 local time, the UN Secretary General will host a dinner with the participation of the head of each delegation along with one more person from each delegation. President Anastasiadis will be accompanied by the negotiator Andreas Mavrogiannis.

Tatar insists on two-state solution, stating that he will not back down

We continue to explain the positions with arguments about two equal, sovereign states, wrote on Twitter the Turkish leader, Ersin Tatar, while in his statements after the end of the informal 5+1 meeting, he said that they will evaluate the situation after the bilateral contacts of the Secretary General with all parties today. He will not back down, he said.

“But, if you noticed, Anastasiadis has made his own assessments, he made extensive reference to the Guterres report, in order to continue (the process) from where he left off. We clearly expressed our positions. There is no change in our position and there will not be one. In the time given to us, we explained our position with arguments.”

Since then, Mr. Tatar continued, meaning the process in Crans Montana, until today many things have changed, the circumstances have changed, the conditions have changed. He explained “all the injustices that have been done to the Turkish-Cypriots since 1960″ in Crans Montana and the Annan plan, by the international community, the UN and the EU. All these are explained, considering all the reactions, saying that “everyone knows we are right and everyone will take a direction accordingly. Because everyone knows that this way we will not be fruitful.”

Mr. Tatar thanked the Turkish Foreign Minister because he fully supported the positions of the Turkish-Cypriot side in his speech.

Asked to comment on reports by the Greek-Cypriot side that sovereign equality goes beyond the mandates of the UN Security Council, Mr Tatar said: “They can say what they wish. The Secretary General called us here knowing what we are saying. Yesterday he himself told us that ‘there are parameters and a series of conditions, but I challenge the terms to bring the two sides together’. If he insists, he will definitely be able to say something. We will wait and see. But we are not going to back down.”

The two-state solution is beyond the mandate terms, said the UN Secretary General to Tatar, according to a Turkish publication

The UN Secretary General mentioned yesterday to the Turkish leader, Ersin Tatar, who presented his arguments for a two-state solution, that such a solution exceeds the mandate terms and it is not possible to discuss it.

This is stated by the Turkish website Kibris Postasi, citing its sources, adding that the Secretary General also told Mr. Tatar that such a solution is not accepted by the EU either.

The website also states that on the other hand, President Anastasiadis will respond in writing to the arguments put forward by Mr. Tatar yesterday and mentions the reference of the President of the Republic, in his own meeting with the UN Secretary General on Turkish reactions, to the decision of “the Supreme Court” in the occupied areas on teaching the Quran.

Greek diplomatic sources speak of full coordination with the Cypriot side and adherence to the basic principles of resolving the Cyprus problem, as defined by the decisions of the UN Security Council.

According to the same sources, the Greek Minister of Foreign Affairs, Nikos Dendias, in his speech today at the informal conference, pointed out that Greece is coming to this meeting in a constructive mood and in good faith.

At the same time, he pointed out that the Mitsotakis government wishes the resumption of negotiations for the settlement of the Cyprus problem, the framework of which must be fully compatible with the UN Charter, the relevant decisions of the UN Security Council, i.e. a bi-communal, bi-zonal federation and the European acquis.

Especially with regard to the last point, he made special reference to the fact that any solution should ensure the continuation of Cyprus’ substantial participation in decision-making within the EU, without any external interference. He also stressed that there is no room for consideration of any alternative beyond the above framework.

Sources of the Greek Ministry of Foreign Affairs also note that Mr. Dendias, referring to the guarantee regime, stressed that there should be provision for the abolition of this anachronistic system and the possibility of intervention by third countries as well as the complete removal of Turkish occupying forces from the island.

Earlier today, these Turkish politicians had meetings with the President of DISY, Averof Neophytou, and the General Secretary of AKEL, Andros Kyprianou.