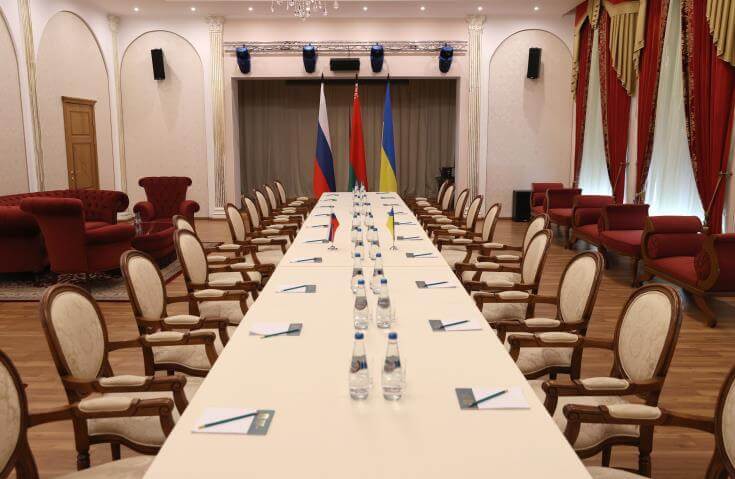 The bilateral talks between Russia and Ukraine have begun on the border with Belarus, said Mikhail Pontoliak, adviser to the Ukrainian presidency. Earlier, the office of Ukrainian President Volodymyr Zelensky had stated that the aim of the talks was an immediate ceasefire and the withdrawal of Russian forces from Ukraine.

Today the Ukrainian President Volodymyr Zelensky called on the EU to allow Ukraine to join immediately under a special fast-track procedure, as the country is currently defending itself against Russian invasion, adding that 16 children had been killed in the last four days of the war and 45 were injured.

“Our goal is to be with all Europeans and above all to be equal. I’m sure this is fair. I’m sure we’re right,” he said in a videotaped speech posted on social media. “Save your lives and leave,” the Ukrainian President called on Russian troops, adding that 4,500 Russian soldiers had been killed so far. Ukraine, its President said, would release prisoners with military experience if they wish to take part in the war against Russia.

Meanwhile, the Kremlin has announced that Russian President Vladimir Putin is currently working on an economic response to the heavy Western sanctions imposed on Russia following its invasion of Ukraine. “The President is in the Kremlin, he is dealing with the economy,” Dmitry Peshkov, the President’s spokesman told reporters in a daily brief. “Sanctions are heavy, they create problems (…), but Russia has all the necessary potential to compensate for the damage,” he added.

A summit called “Quint elargi” will be attended by the Heads of State and Government of the United States, France, Germany, Italy, Poland, Romania, Canada, Japan, and the leaders of the  European institutions and NATO. The summit will take place today at 18:30 Cyprus time.

The President of France will then welcome German Chancellor Olaf Soltz and European Commission President Ursula von der Leyen at the Palais des Champs-Elysées for a working dinner with representatives of European industrialists to discuss “the dangers of European economic sovereignty and the events in Ukraine,” the French presidency said.