Tillyria | Occupation harassment towards the residents of Kato Pyrgos – The parties are shouting for revenge actions – VIDEO
Defence Redefined
Published on 24/11/2020 at 12:27 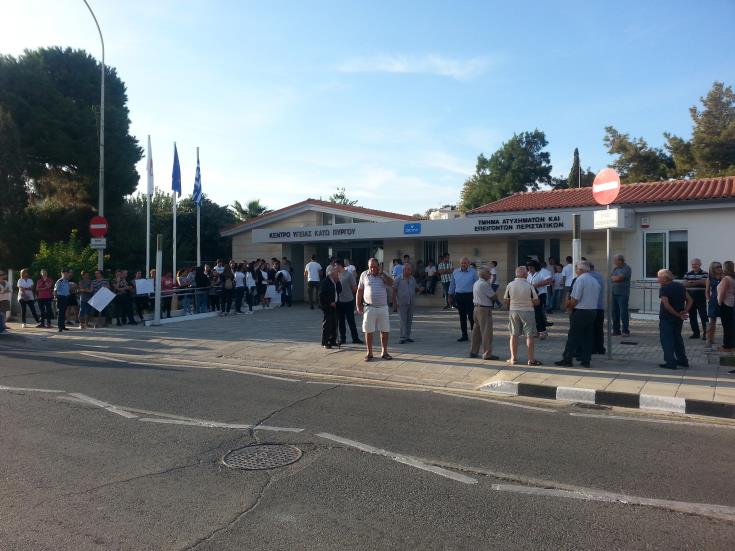 Once again, the occupying “authorities” of the illegal pseudo-state are harassing the residents of the remote community of Kato Pyrgos, forcing them to undergo a coronavirus test every 72 hours so as to cross the roadblock and commute to Nicosia where they work or have obligations.

According to statements by Nikos Cleanthous, mayor of Kato Pyrgos Tillyria, on the show Alpha Kalimera, it takes 24-36 hours for the samples to be taken and sent to Nicosia for examination, so the tests must be done with a similar frequency.

Specifically, he stated that about 100 tests are performed per day, which are provided free of charge by the Ministry, as about 180-200 people pass through the crossing point every day.

Last week, 600 tests were performed, all with a negative result.

He noted that people who cross the roadblock do so for easy crossing and to go to work in the free areas as it is the shortest road and this could be controlled by the occupying authorities.

This news brought the strong reaction of the parties, which call on the Government to take measures – retaliation, for the suffering of the residents of Kato Pyrgos.

The Movement of Ecologists, in a press release states that:  “The problems of the inhabitants of Tillyria do not come to an end, as they are intensified by the new demand of the occupied authorities for a coronavirus test every 24 hours.

In turn, ELAM calls on the Government to provide free electricity to Tillyria and not to the Turkish outposts and the occupying regime. Many times in the past we had stressed, as the National Popular Front (NPF), the need for the Government to prepare a framework of a “special caged area” to support the remote area of Tillyria, with various immediate and long-term development incentives.

The sloppiness of the measures taken to deal with the coronavirus epidemic can be seen in the fact that the inhabitants of this area have been trapped even more, as for decades the State has left them at the mercy of their fate.

At the same time, we must denounce the provocative, for all people, provision of free electricity to the military occupation enclave of Kokkina and to the pseudo-state.

The National Popular Front (NPF) strongly argues that free electricity should be given to the trapped area of ​​Tillyria and not to the Turkish outposts, and to the occupation regime that ultimately illuminates the flag that infects Pentadactylus.

In addition, our Party considers it inconceivable that the Government continues to provide a large amount of money to Turkish Cypriot students, instead of giving this money to support students and the youth of the remote, trapped, Tillyria in general.

AKEL Nicosia – Kyrenia, in a statement, “denounces in the strongest way the new provocative action of the occupying authorities to request a molecular test (PCR) of coronavirus every 24 hours for crossings through roadblocks. This measure essentially makes it impossible for the inhabitants of Tillyria to cross to Nicosia through the occupied territories. We call on the government to take all those measures that will free the inhabitants of Tillyria and to ensure that in no case will problems be caused in matters of the safety and health of the inhabitants.

Once again, we want to express our support and solidarity to the people of Tillyria and to all those who are affected by this action of the occupation authorities.”

Also read: A military uniform was found in the luggage of illegal immigrants

The Solidarity movement suggests that all roadblocks be closed, or that appropriate measures be taken for Turkish Cypriots moving to the free areas. Specifically, Solidarity states that “the government must immediately find solutions for the free movement of the residents of Tillyria, who have been trapped and isolated after the decision of the occupation regime to impose a negative molecular test of the last 24 hours.

We should all keep in mind that the obstructions of the occupying “authorities” are not accidental. Apart from the serious problems it creates in the daily life of the residents of Tillyria, who often pass through the roadblocks of the Republic of Cyprus to move to the other free areas of the Republic of Cyprus where they work, they also cause serious problems to the teachers who teach in schools in occupied areas.

The closure of our schools in Rizokarpaso is the desired goal of Turkey, and the Republic of Cyprus must at all costs ensure that this does not happen.

Obviously the solution is not an agreement with the occupying authorities, as they are not going to consent, nor is the United Nations going to help.

Otherwise, we suggest that all roadblocks be closed, or that appropriate measures be taken for Turkish Cypriots moving to the free areas.

There should be a control program for these people with daily tests and the cost should be borne by the state. There are solutions.”

EDEK calls on the state to take responsibility for conducting diagnostic coronavirus tests for the commuting purposes of the residents of Kato Pyrgos.

“The protests of the residents of Kato Pyrgos are completely justified.

If and when no regulation is made due to the behavior of the occupying regime, we call on the state to take responsibility for conducting daily diagnostic coronavirus tests for the purposes of their commuting.”

The Democratic Party states that “the new decision of the occupying regime – mandatory submission of a negative PCR of the last 24 hours for crossings from the free areas to the occupied areas – is another message of hardening of the Turkish stance, in view of Ms. Lut’s descent to Cyprus and of the UN efforts to restart the dialogue on the Cyprus issue.

It is obvious that when Mr. Tatar indirectly closes the roadblocks on the occasion of positive Greek Cypriot cases in Rizokarpaso while the cases announced in the occupied areas are only 2 to 5 daily, the reasons for this decision are different. Certainly not epidemiological.

The new decision of the occupation regime has direct consequences for the residents of Kato Pyrgos, whose protests we consider absolutely justified.

We call on the government to actively support the residents of the area by providing every possible facility to serve the needs of their movement.

We call on the United Nations to address the relevant steps taken by the Republic of Cyprus in accordance with the terms of the UNFICYP mandate.”

We remind you that, following a step taken by the Republic of Cyprus, the occupying authorities have revoked their decision for the daily diagnostics, by requiring a test of the last 72 hours for the passage of Greek Cypriots through the occupied territories.

Also read: On Tuesday, the renewal of the UNFICYP resolution by the Security Council