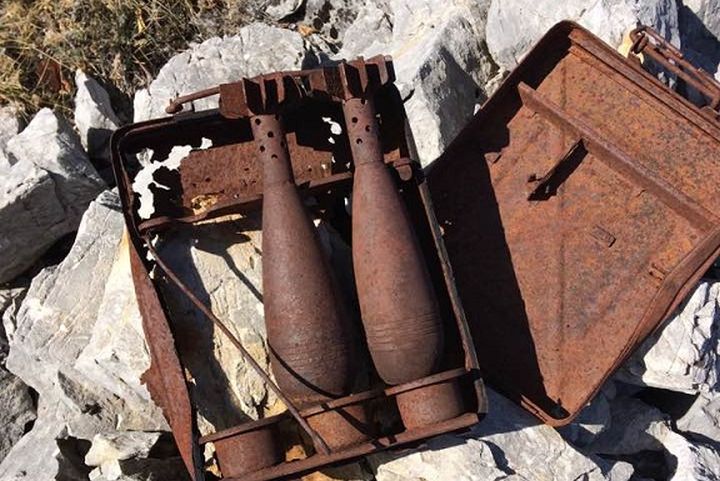 Shells are constantly being unearthed at the construction site of Leontos Sofos in the Center of Thessaloniki, as a total of 51 Second World War oxidized shells have been detected so far.

Since the start of the work last week, up until midday on Friday, a total of 51 shells have been detected at the site, where construction work is being carried out on a multi-story block of flats.

Only in the last few hours, the bomb disposal experts of the Mine Disposal Department detected and removed 29 shells from the site, most of which were found in intact boxes (12 in threes inside the boxes) and the rest scattered in the soil.

All the shells were found in the same place and it is assumed that during the Occupation there was an ammunition depot in the area. A three-story block of flats was erected within the specific site in 1954 and demolished in 2004, according to locals and experts.

Speaking to the Athenian-Macedonian News Agency, the Assistant Professor of the History and Archeology Department of AUTH specializing in Contemporary and Modern History, Stratos Dordanas, pointed out that it is very difficult to know anything specific about the spot where the shells are located, on Leontos Sofou Street, owing to the fact that it is a very small section in time in the history of occupied Thessaloniki, which is very difficult to identify.

Mr. Dordanas noted that there was apparently an ammunition depot there that could have belonged to the Hellenic Army, the material of which was then expropriated by the German authorities or it could be a German army depot.

In fact, he emphasized that he could not come to any conclusion as there are no available data, while he clarified that such issues should have already been promoted and highlighted in Thessaloniki through the Municipality in collaboration with the Thessaloniki History Center having proceeded to study and research to accurately identify the invaders in the field.

Also read: USA – Bulgaria | Exercise for the detection of nuclear and radioactive material at border checkpoints