The Minister of Defence in “DЯ” | Turkish UAVs, upgrade of the National Guard and American armaments market – (Part B) 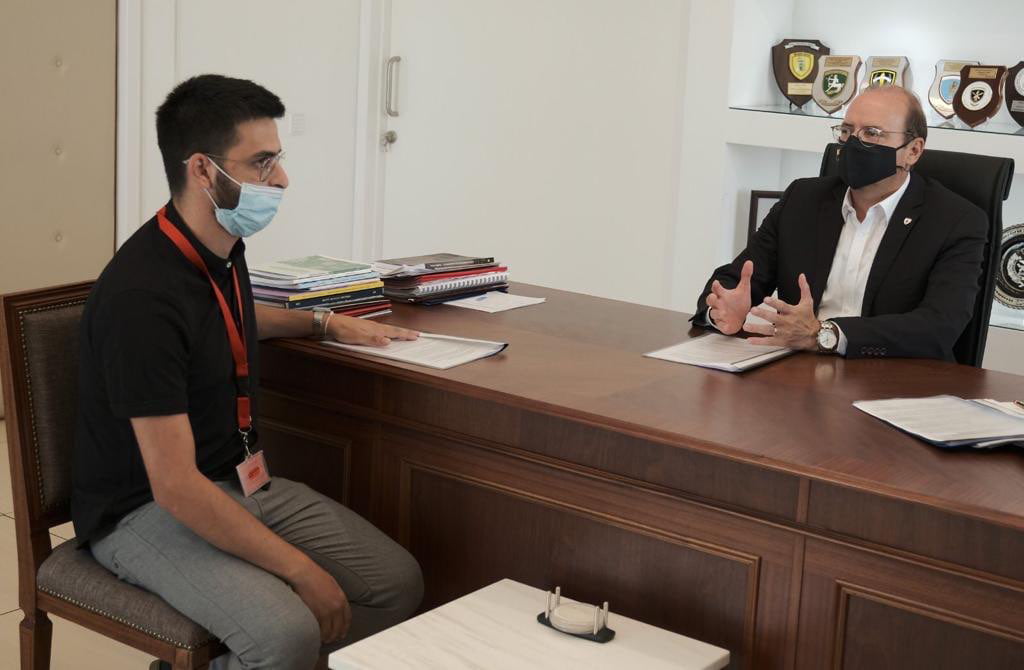 In the second part of our interview with the Minister of Defence, Charalambos Petridis, our discussion revolved around the DEFEA exhibition, the armaments program of the National Guard, the Turkish moves in the occupied Lefkoniko, the possible lifting of the American arms embargo as well as the bilateral relations that the National Guard developed with other states. Click here to read part A.

As the Ministry of Defence, we consider it necessary to declare our presence at such exhibitions. In this context, we support our first participation in the DEFEA Defence Exhibition that will take place in Athens. Our National Pavilion will host nine Cyprus companies active in the defence sector. It is noted that five of them participate in major European EDIDP Programs.

Our presence is essential for Cyprus companies wishing to be active in Defence Research and Development. At the same time, not only do we get across the message that the MoD actively supports the efforts of Cyprus companies, but also we strengthen the effort of our companies for networking and cooperation with international military delegations and important companies.

Could the crisis caused by the pandemic delay the completion of the armaments program planned by the Ministry of Defence and the National Guard General Staff in the long run? We note that the Ministry of Defence has already signed contracts related to the upgrade of specific weapon systems at an estimated cost of 240 million euros, according to foreign media reports.

I would not say that the crisis caused by the coronavirus pandemic has affected our armaments program. Proper planning, based on modern needs fully in line with our financial capabilities, allowed us to continue the armament program so as to upgrade capabilities. In the last few years there has been an increase in funding for armament programs. Despite the fact that classified information does not allow me to expand, the MoD aims at the implementation of programs that will provide unprecedented possibilities to the National Guard. Among other things, they concern the strengthening of the possibilities of early warning, intelligence and situation awareness as well as engaging targets with precision at long distances. In addition, we are working on strengthening the capabilities of the Armed Forces to deal with air, naval and ground threats, including UAVs and the occupying forces.

It is a fact that the deterrent power of the National Guard should be strengthened against the threat of Unmanned Aerial Vehicles (UAVs), since, according to the Turkish President, Recep Tayyip Erdogan, we know that they are operating from the base of the occupied Lefkoniko. There are concerns that the political leadership is not fully aware of the extent of this risk. Are there any plans for this threat? Are we concerned about what partly happened in Nagorno-Karabakh?

The MoD studies and takes into account all the lessons learned from modern operations, including the role of unmanned aerial vehicles (UAVs). On the one hand, the emergence of UAVs can be considered as a threat that must be addressed, and on the other hand as a technology that gives small armies such as the National Guard new substantial capabilities like, for instance, the capability of technologically- and numerically-superior air forces.

All actions taken for the permanent station of Unmanned Aerial Vehicles (UAVs) in Lefkoniko are monitored. There is a full understanding at all levels of the potential of UAVs. The defensive plans of the Armed Forces are adapted accordingly.

The events in Nagorno-Karabakh and the conclusions that have been drawn, mainly regarding the purely military operations that took place between the warring factions, concern us and are being studied accordingly.

Also read: Erdogan on Bayraktar TB2 in the occupied areas | “We must be powerful in the event of any attack in the region”

What are the developments regarding the lifting of the American Arms embargo in the Republic of Cyprus? Is the non-granting of naval facilities (port calls) to Russian Ships still a problem? In the event of a lifting of the embargo, do you think Cyprus could benefit immediately by conceding even surplus military equipment? Indicatively, the example of Greece is mentioned which acquired KIOWA Warriors helicopters, MARK V boats, etc against a symbolic cost.

The amendment of the International Traffic in Arms Regulations (ITAR) in the USA is a positive development and reflects the significant improvement in the relations and cooperation between the Republic of Cyprus and the USA, which has recently taken place. This enables us to seek solutions for the supply of non-lethal defence equipment in the US market as part of its defence procurement procedures. In the event of a complete lifting of restrictions, we will explore ways in which to get the most benefits and further strengthen the National Guard.

Turkish aggression is no longer news as Turkey has extensively expressed in the clearest way its intentions regarding the exploitation of natural gas deposits in the Cyprus EEZ. The Republic of Cyprus addressed this issue through diplomacy and the invocation of International Law. However, should we be concerned about the possibility of provoking an incident between Greece and Turkey and the risk of tension transmission (among other regions), including Cyprus?

Turkey’s aggressive rhetoric both within the Cyprus EEZ and the Greek EEZ and continental shelf cause instability in the wider region. There is a universal backlash against Ankara’s destabilizing actions, which run counter to international law and the law of the sea.

The possibility of provoking an incident between Greece and Turkey certainly causes a feeling of uncertainty and perhaps insecurity. What we are doing on our part – as we did last summer when the tension had escalated – is to calmly monitor the situation and make the appropriate diplomatic moves.

At the same time, all our actions and collaborations aim at creating an umbrella of security and stability in the wider region of the Eastern Mediterranean.

Could our bilateral and tripartite relations with various friendly countries (except Greece) be a shield to protect the Republic of Cyprus in the event of a military threat on the part of Turkey?

One of the main pillars of the Ministry’s activities is the strengthening of transnational relations with countries that respect the principles of International Law with the ultimate goal of enhancing security and stability in the Eastern Mediterranean.

With wise and thoughtful steps we have developed collaborations both in the wider region and with countries within the EU. Participation in joint exercises and the presence of foreign means and personnel in the region for joint training promotes friendship and strengthens the relations between the countries.

The long-term goal is to form alliances that will be a deterrent to Turkey’s aggression.

Were the events of Evros, Mr. Minister, a “case study” on what we might have to deal with in the event of a similar Hybrid War? What scenarios is the Ministry working on in cooperation with the Cyprus Police? We note that the recent installation of barbed wire in various areas, planned by the Ministry of Interior, provoked reactions partly on the part of the public. Is there effective guarding of areas from which there is an increased flow of illegal immigrants or other persons?

Certainly both the events in Evros, where thousands of illegal immigrants from Turkey attempted to enter Greek territory, and the ever-increasing flow observed to the free areas from the occupied areas, have led the Government to take deterrent measures, including the installation of barbed wire in the area of ​​the village of Astromeritis, along the Forward Defence Line in order to prevent uncontrolled passage in the area, but also to send a clear message to traffickers that they cannot enter the free areas illegally.

In order to deal with this serious issue, all the competent bodies are in constant coordination and each one assists in accordance with its responsibilities, which stem from the current legislation. In particular, in cooperation with the Cyprus Police we have strengthened the surveillance measures along the Buffer Zone and we have increased the patrols which are carried out jointly by men of the Police and the Army, so as to strengthen the public sense of security and provide faster intervention where needed.

Undoubtedly the problem is very serious and so is the effort to deal with it daily. Certainly the surveillance of the Forward Defence Line is the core of this effort with the Ministry of Defence and the National Guard constantly working out ways that contribute in this direction.

I believe that with the new Action Plan for tackling immigration, which was approved by the Cabinet and is being implemented, there will be positive results and a reduction in flows to the free areas.

To this end, the provision of electronic means of surveillance has recently been taken into account.

The DEFENCE ReDEFiNED team expresses its gratitude to the Minister and the personeel of the Ministry of Defence for the immediate response and implementation of our interview.