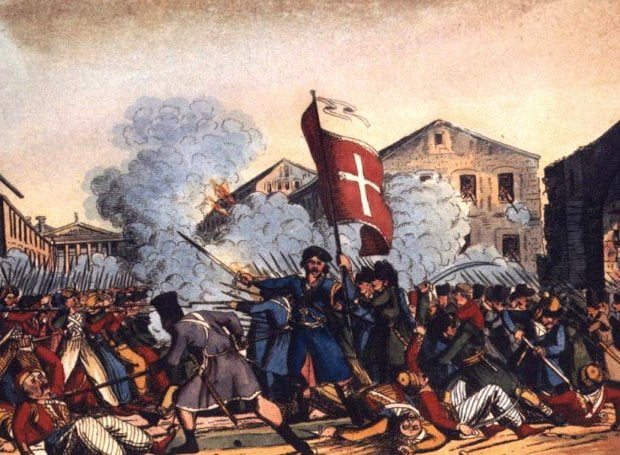 During the Greek Revolution, Tripoli was the most important administrative, military and economic center of the Peloponnese, of particular strategic importance as it controlled the roads to the other major cities of the Peloponnese.

The Greeks attempted the first siege of the city in 1770, an attempt that ended ingloriously and led to the massacre of the Greek population.

The city was surrounded by a wall 3.5 km long, about 4 m high and 2 m thick. It had towers with double crenels and thirty cannons, a few of which were in good condition. Despite its good fortification, Tripolitsa was more vulnerable than the other castles of the Peloponnese, because it was located in the middle of a plain and its wall was made of simple stones without reinforcement, but mainly because it could not rely on any support from the sea.

Also read: The Battle of Thermopylae | The defeat that History turned into a victory – Interactive Map

With the beginning of the revolution and hostilities, the Greeks left and many Turks took refuge in Tripoli, as well as in other fortified cities. As a result, its population doubled and reached at least thirty thousand inhabitants.

Theodoros Kolokotronis understood the strategic importance of the occupation of Tripoli more than anyone else. Owing to his persistence, the Greeks avoided the division that had been proposed by other chiefs who aimed at the small Messinian castles and focused on a large and central goal, which would help in the effective control of the Peloponnese. The siege was preceded by his victories at Valtetsi (May 12) and Doliana (May 18).

Within the walls were more than 30.000 Turkish civilians, Jews and several thousand armed men. When the situation of the besieged became difficult due to the lack of food but also because of the continuous defeats of the Turkish troops in battles in Levidi, Valtetsi, Doliana and Grana (facts that made its occupation apparent), some of them started private negotiations with the Greek besiegers for their safe exit from the besieged city.

Four large corps of Greek revolutionaries in the formation of a semicircle around Tripolitsa began the siege. To the left of the formation was Kolokotronis with 2.500 men, to the right Giatrakos with 1.500, in the center was Anagnostaras with 1.000 and behind the center (right) was Petrobeis Mavromichalis with 1.500 men.

Also read: “Hymn to Freedom” | From Dionysios Solomos to the besieged of Messolonghi and across the Nation

Petrobeis was proclaimed General under the supreme leadership of Dimitrios Ypsilantis, but the person in charge of the operation was Kolokotronis. Until August, clashes took place between the warring parties, in which the Greeks were superior when they had to face the Turkish infantry. But even when their cavalry attacked, they retreated to the foot of the mountains and, protected by the morphology of the ground, they again inflicted heavy losses on the Turks.

Having been informed about the transfer of ammunition and aid to Tripolitsa, Kolokotronis ordered the creation of a trench on the road the Turks would take.

Thus, on August 10, more than 4.000 Turks, who had gathered plenty of food from the surrounding villages, were attacked on their return to the city by the Greeks huddled in the ditch. The Turks suffered heavy losses and all food and animals fell into the hands of the besiegers. This battle of Grana brought despair to the already hungry Turks.

At the end of August, the Scottish philhellene, Thomas Gordon arrived from Marseilles by ship, with Greek and philhellene volunteers, three guns and six hundred rifles. However, Greek artillery could not inflict heavy casualties on the enemy despite the efforts of foreign volunteers including Raybaud.

From the dawn of the 23rd the whole city was in great turmoil: the Albanians were preparing to leave while the Turks were discussing new negotiations with the Greeks. The consequence of this disturbance was that the cannon station of the gate of Nafplia remained unguarded.

In the morning of the same day, 50 Greeks climbed the wall, stepping on each other’s shoulders, opened the gate and raised the Greek flag. The Turks sounded the alarm, the Greeks opened other gates and everyone rushed into the city.

Once the Greeks were in the city, the Albanians all gathered in the sarai, uninvolved in the clashes, citing the treaty they had made. Although this condition could be considered invalid after the fall, Kolokotronis ensured their safe departure under Plapoutas who had been given as a hostage, handing over their luggage that was in his custody.

A savage massacre followed in the city. For three days the Greek rebels carried out looting and torture against the inhabitants of the city, Turks and Jews. It is estimated that 2.000 Jews and 30.000 Turks were killed. According to J. M. Wagstaff, the victims were “between 10.000 and 15.000”. According to the Modern Encyclopedia Eleftheroudakis, the number of massacred people was about 12.000. According to the co-editor of Encyclopedia Americana, Thomas Gamaliel Bradford, the death toll was 8.000, while according to Thomas Curtis, the death toll was 6.000.

The Turks tried to resist but in vain. Some were locked up in the Great Tapia, the acropolis, others in the Turkish school and many were fortified in their homes. Most were killed or “burned in their houses with their families rather than surrender to their slaves.” All Turkish leaders were captured, but large numbers of the Turkish population were slaughtered.

“It was the day of destruction, fire, plunder and bloodshed. Men, women, children, all died …… and the thirst for revenge silenced the voice of nature. In the streets, in the squares, everywhere there were no stabbings, shootings, waves of demolished houses in the midst of flames, screams of rage and death chants; the ground of corpses was laid …… offenses of four centuries. And the Jews in Tripoli …… were all destroyed.” This is the narrative of the massacre according to Trikoupis.

In his report, Kolokotronis wrote: “My horse from the walls to the slums did not tread on the ground … The army inside, the Greek one, cut and killed, from Friday to Sunday, women, children and men, thirty-two thousand … A Hydraean slaughtered ninety … When I entered Tripoli I was shown the plane tree where the Greeks were hung, I sighed and said: “Come on, how many of my nation were hung there. And I gave the order to cut the tree down; I was also comforted by the slaughter of the Turks. “

On September 26, in order to stop the looting, Kolokotronis appointed the policeman Andreas Papadiamantopoulos and gave him 200 men to “go on the streets of the state and in the barns and at the doors so that riots would not follow.”

According to Philemon, “the results of the fall of Tripoli had a great effect on the Greeks.” The Revolution was equipped with 11.000 weapons, enlivened and gained a name abroad. The strongest warriors of the Peloponnese were defeated and the whole peninsula, except for a few fortresses, fell to the Greeks.

In 1836 a bronze medal was issued in memory of the fall of Tripoli. On one side it bears the inscription “THE GOD LEADS THEM – TRIPOLI SEPTEMBER 23, 1821” and represents two fighters who assist a woman in ancient Greek clothing and a shield to stand up.

The Fall of Tripoli is celebrated in the city every year on September 23, with political and religious ceremonies in the presence of officials. The President of the Republic sometimes attends celebrations.