HISTORY
On this day Flying Officer Nikolaos Sialmas is sacrificed for the Homeland
Defence Redefined
Published on 18/06/2022 at 17:30 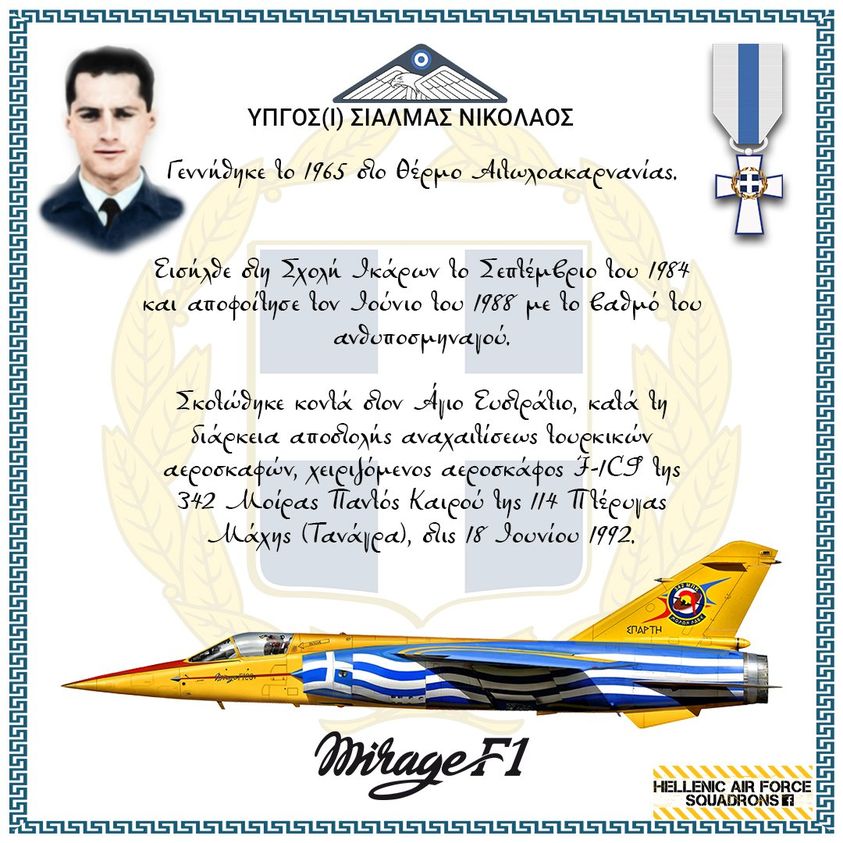 On this day, thirty years ago, Flying Officer Sialmas Nikolaos sacrificed his life in Agios Efstratios as a young Spartan to guard Thermopylae.

Yesterday, Friday, June 17, 2022, the Deputy Minister of National Defence, Nikolaos Hardalias, represented the Greek Government at the events held to honor and commemorate the fallen hero, Flying Officer Nikolaos Sialmas. These events were co-organized by the Hellenic Air Force General Staff and the Municipality of Agios Efstratios. The Most Venerable Archimandrite, Mr. Kyrillos, addressed a greeting on behalf of His Eminence the Metropolitan of Lemnos and Agios Efstratios, Mr. Hierotheos III.

The events took place at the cape of Nikolaos Sialmas in Agios Efstratios, where the homonymous monument is located.

As a child, Nikos had expressed his passion for becoming a pilot from a very young age. The little boy who was born in 1965 in Thermo, Etoloakarnania, turned into a teenager and actually joined the Hellenic Air Force Academy in September 1984. In June 1988 he graduated as a Pilot Officer. Four years after his graduation from the Academy, Nikolaos Shialmas served as a Flying Officer in the 342nd All-Weather Squadron.

Flying a Mirage F1 CG aircraft, Sialmas took off from the 114th Combat Wing in Tanagra, next to a second Mirage of the same type, flown by Flight Lieutenant Manolakos. Things were not easy at all. Greek aviators were asked to locate the brand new, third-generation F-16C fighters that Turkey had just acquired.

The Greek pilots took a northern route to Lemnos over Ai Stratis, they located the Turkish aircraft and proceeded with the usual process of reconnaissance – interception, but the Turks did not leave as they usually did. They had new planes and had decided to react.

As expected, there was an engagement. The Greek pilots had to rely on their skills and the daring techniques they had been taught to compensate for the “best engines” that the Turks had in their hands. According to the testimony of the second pilot, I. Manolakos, during the maneuvers executed by the Greek aircraft to gain a tactical advantage, they had to descend to a very low altitude.

At one point, Flight Lieutenant Manolakos saw Sialmas’s plane fall into the sea and crash. It had been only 17 minutes since the order was given to take off immediately, the so-called “scramble”. A Hellenic Air Force helicopter and a plane, as well as a Coast Guard fast craft, immediately rushed to the scene, where they only found debris.

The provocation of the Turks did not end there. As was reported in the media back then, Turkey sent a high-speed warship to the region, under the pretext of search and rescue assistance. Yet, Greece was the one responsible for the search and rescue mission in the region. So, sending the speedboat was another claim and dispute on the part of Turkey. 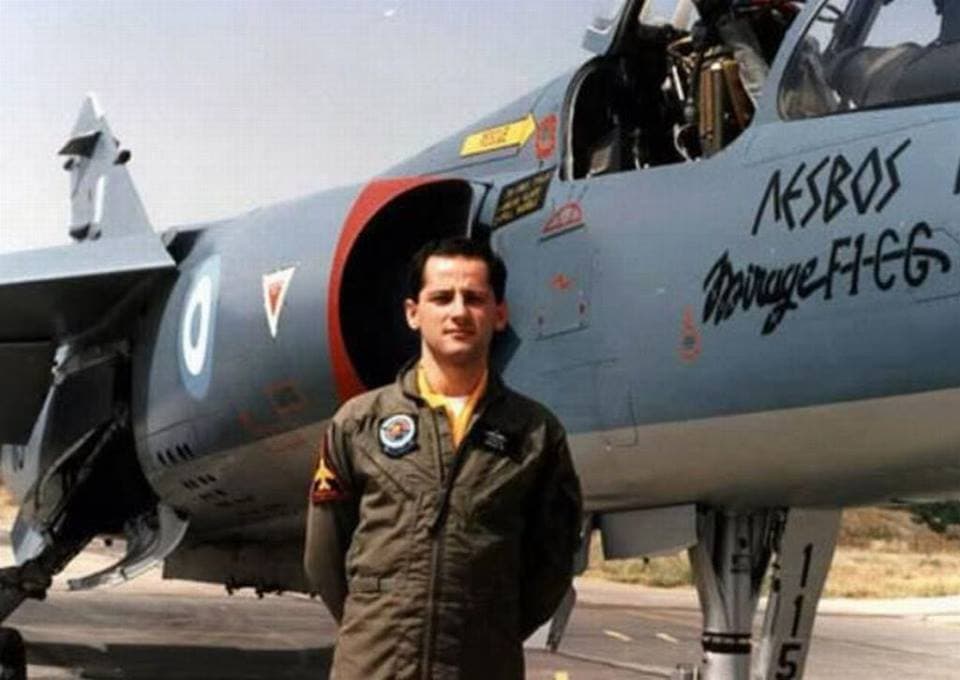 Nikolaos Sialmas is the first Greek pilot who fell in a dogfight in the Aegean with Turkish aircraft violating Greek airspace. The funeral of the Greek aviator took place at all costs. The coffin was covered with the Greek flag, with the aviator’s cap and sword. The wreaths laid were innumerable.

The self-sacrifice of the Flying Officer did not go unnoticed. The State changed the name of the southern cape to Agios Efstratios, where Sialmas fell.

“Tripiti” was renamed “Nikolaos Sialmas”. In a prominent position, the Hellenic Air Force erected a large monument in memory of the deceased, depicting a Spartan shield along with a spear, which is the coat of arms of the 342nd All-Weather Squadron, Sialmas Squadron. The inscription in huge capital letters states “MOLON LAVE” (“COME AND TAKE THEM”). The monument is so large that it can be seen from above every time aviators fly over the area. 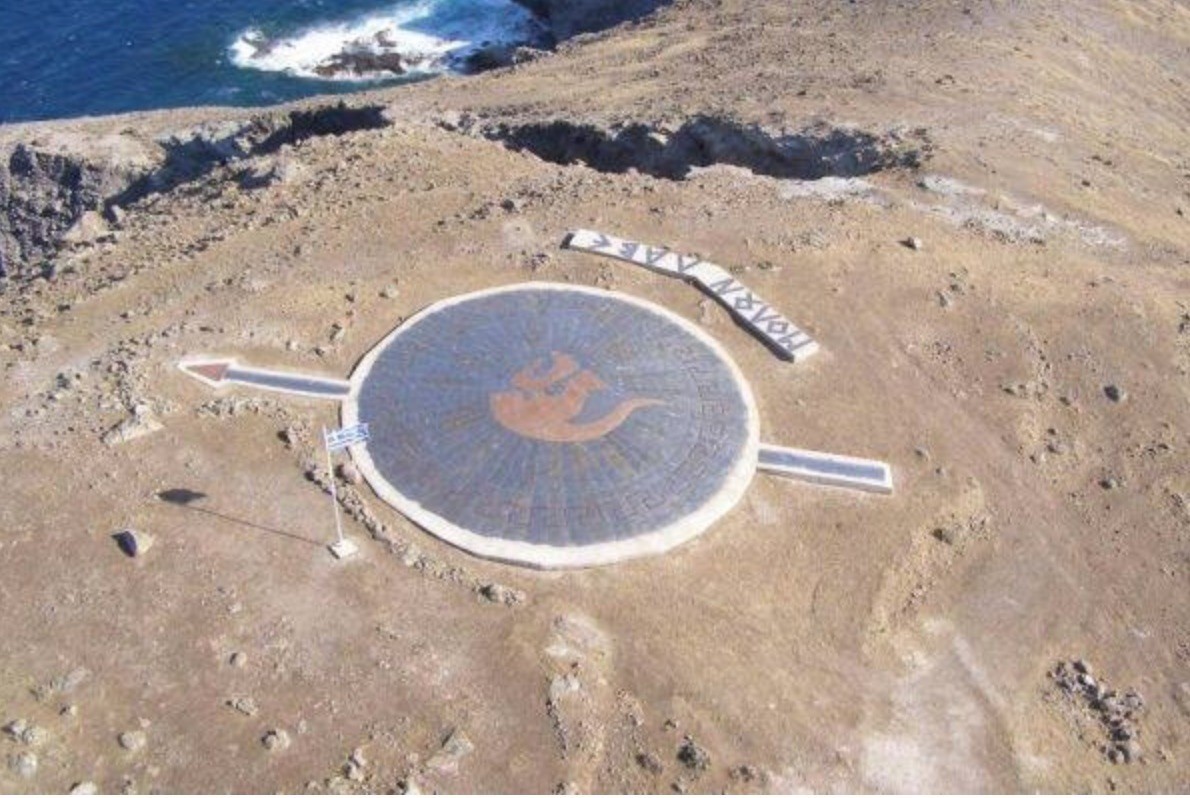 Today, the sacrifice of Nikos Sialmas is more relevant than ever due to the frantic Turkish provocation, but it is certain that our Air Force will defend every inch of the Greek territory.

Today, more than ever, vigilance is required not only on the part of the Hellenic Armed Forces, but also for the Greek people. The enemy is at the gates.