NEWS
Naval Group | Signing of contracts with 10 Greek companies for the FDI HN program
Defence Redefined
Published on 20/12/2022 at 17:05 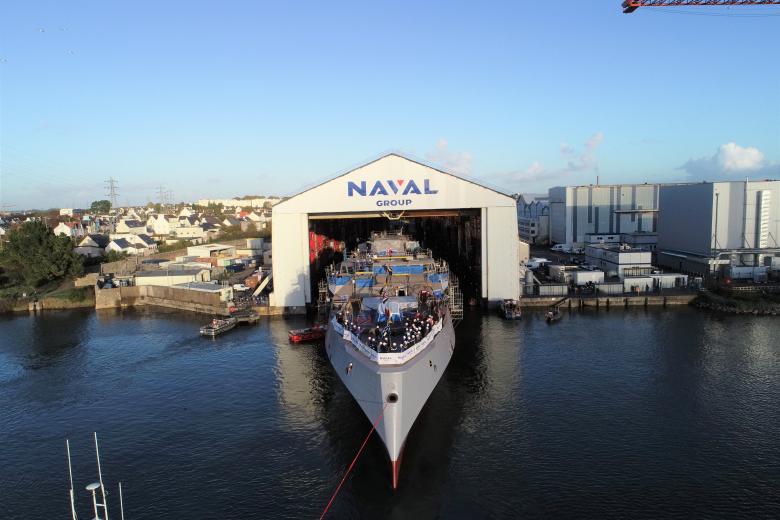 Naval Group announced that it has proceeded with the conclusion of a series of collaboration contracts with Greek industrial companies within the framework of the FDI frigate construction program ([email protected]) for the Hellenic Navy.

As announced, to date 23 contracts for FDI frigates have already been signed with 10 Greek companies. The latest contracts were signed at the Hellenic Pavilion during the Euronaval exhibition in October 2022.

According to the same announcement, as the Hellenic Industry participation plan for FDI frigates moves forward, the Naval Group is ready to further strengthen these partnerships to bring more enterprises and jobs to Greece through the Gowind corvette program.

Also read: Naval Group Hellas | Naval Group proceeds in the establishment of a subsidiary in Greece

In particular, Naval Group’s partners so far include:

Naval Group and Salamis Shipyards signed a contract for the construction of several hull blocks for the FDI frigates in Greece. This contract can cover blocks for up to 6 frigates for the French and Greek Navies. These blocks, weighing from 25 to 100 tonnes, will be manufactured in the Salamis area and shipped to Lorient for final assembly.

The kick-off meeting took place on November 15, 2022, and the preparation of the production engineering and shipyard is underway for a start of steel works, expected in early 2023.

On November 18, 2022, at the Hellenic Pavilion at Euronaval, AKMON SA and Naval Group signed a contract for the production of several sets of consoles and electronic cabinets for the Combat Management System of the FDI frigates, the Integrated Bridge, the Navigation System and the Integrated Platform Management System in Greece. The kick-off meeting took place on November 16, 2022.

After an initial period of training and know-how transfer for the AKMON team at the Angoulême-Ruelle Naval Group site, production will begin in 2023 in Greece at the Ano Liosia Industrial Park.

Since the signing of a Framework Agreement and a contract at Eurosatory in June 2022, the collaboration between Naval Group and MEVACO SA is constantly growing with the cooperation of teams and the signing of contracts.

After a certification phase of the welders by Bureau Veritas, production started in Aspropyrgos in September 2022. The first Factory Acceptance Test was successfully carried out on November 23, 2022, for the first “made in Greece” equipment for the FDI frigates.

This equipment, an important structural hull device requiring a high level of mechanical precision (and the first of a long series) will now be shipped to Lorient to be fitted to the second Greek frigate.

EMMIS, a renowned company specializing in electrical transformers, is actively participating in the FDI frigate program for both the French and Greek Navies.

EMMIS joined Naval Group’s supply chain in June 2022 and a contract was signed in the same month to supply electrical equipment for the FDI frigates. The production of the first set has already started at the EMMIS factory in Kifissia and the first delivery to Lorient is expected in mid-June 2023.

THEMYS, one of Naval Group’s leading suppliers for FDI frigates and civilian communication and navigation systems, awarded a contract to Greek companies such as MAREL.

MAREL, and its sister company SPACEL both located in Piraeus, are currently participating in the FDI frigate program for the supply of navigation and communication equipment (radar system components, echosounder, head repeater, VDR, SATCOM, GMDSS, etc.) after a rigorous pre-qualification process conducted by Naval Group. Once the equipment is delivered to Lorient, MAREL experts will participate in its installation on board as well as in trials.

In addition to their participation in the frigate program, all specialized Greek companies will be integrated into Naval Group’s supply chain and will be able to participate in other future international tenders, thus increasing their capabilities as well as their potential economic benefit and visibility in the global naval market.

Thanks to its long-term presence in Greece, Naval Group has managed to identify and build relationships with many highly specialized and innovative companies. To date, more than 80 projects have been identified and the Group has started working with more than 50 pre-qualified Greek companies.

Naval Group’s Hellenic Industrial Participation plan will thus contribute to the construction of the FDI HN, but also to the creation of a strong naval industrial ecosystem in Greece. The structured and long-term collaboration proposed by Naval Group will strengthen production in Greece, but also the ability to deal with future needs, the same announcement concludes.