National Interest | Measures against Turkey and the resolution of the pseudo-state by researcher Michael Rubin
Defence Redefined
Published on 12/03/2021 at 09:00 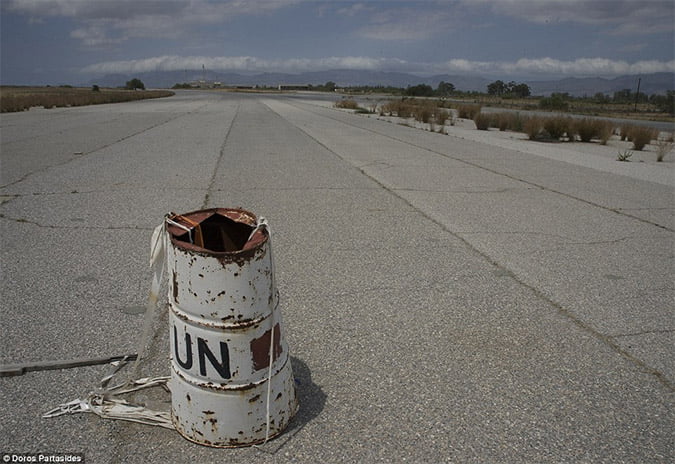 An article, a facer for Turkey and the pseudo-state, was published by the researcher of the American Enterprise Institute in Washington, Michael Rubin, in the American magazine National Interest, which analyses that the stance of the UN against the Cyprus issue, drawing a parallel with the case of Iraq and the measures taken there.

First of all, it should be mentioned that the researcher Michael Rubin served in the American Pentagon and in his article dated July 28, 2020, he argued that the USA should lift the arms embargo on Cyprus. In his article entitled “Donald Trump Should Lift the Arms Embargo on Cyprus Now“, Rubin argued that when the US needed basic financial support for the assassination attempt on Qasem Soleimani, they turned to Cyprus, which could not help because it did not have the proper means owing to the American embargo.

In yesterday’s article (11/03), entitled “Why Is Cyprus Still Divided?”, Michael Rubin blasts Turkey and the United Nations for its stance on Cyprus and the Cyprus problem, stating that “Cyprus and its allies do have the right to one day expel Turkish outposts from the island by force if other coercive measures fail.”

The article in detail:

The division of Cyprus is fast approaching the half-century mark. In fact, that division has now lasted longer than that of Germany. Close to two-thirds of Cypriots were not yet born when Turkish troops first invaded the country. The United Nations Peacekeeping Force in Cyprus (UNFICYP) maintains the separation between Greek and Turkish Cypriots but it has failed to stop (let alone reverse) Turkey’s ethnic cleansing of the northern third of the island. While the United Nations has sporadically sponsored initiatives to end the occupation, these have gone nowhere. There have not been any substantive talks for the last three years, nor will there be: The discovery of vast gas deposits in Cypriot waters makes Turkish forces less likely to withdraw. When Turkey and Turkish Cypriots do engage, they do so insincerely to keep the process alive, even as they work to undermine any permanent solution.

When a diplomatic strategy fails consistently, it is time to reconsider its logic. Turkey already has walked away from longstanding UN and European Union frameworks for a solution when, in recent weeks, President Recep Tayyip Erdoğan dismissed federalism and insisted on a two-state solution in which the international community would formally accede to the permanent division of Cyprus. Rather than empower Erdoğan and Turkey’s puppet government in Northern Cyprus by treating it as an equal with the internationally recognized Cypriot government, perhaps it is time for the international community to embrace an Iraq model.

There is little difference between Kuwait in 1990 and Cyprus today. Saddam Hussein may have resurrected revanchist claims against his southern neighbor just as Erdoğan now does, but Iraq invaded Kuwait primarily to loot its natural resources. The same now holds true for Turkey in Cyprus; Turkey’s original casus belli, protecting the Turkish Cypriot community against the Greek military junta disappeared within a week when Greece’s military regime collapsed and Greeks embraced democracy. Today, Freedom House ranks Greece completely free with a rating superior even to that of the United States. It ranks Turkey as not free, on par with Algeria and below the self-declared Republic of Artsakh in Nagorno-Karabakh in terms of rights and freedoms.

When Turkey invaded Cyprus, the United Nations Security Council unanimously passed a number of resolutions that were symbolic but toothless. They called for a ceasefire and deplored continued fighting and non-compliance. Since 1975, there have been more than four dozen additional resolutions, none of which have deterred Turkey from further consolidating its control of northern Cyprus. In effect, northern Cyprus reflects the United Nations at its most impotent.

Contrast that with the United Nation’s response after Iraq’s invasion of Kuwait. As with the Turkish invasion of Cyprus, initial Security Council resolutions came in a flurry. Resolution 660 demanded an immediate and unconditional Iraqi withdrawal. Four days later, the Council passed Resolution 661 placed sweeping sanctions on Iraq banning most international trade. Three days later, the Council passed 662 declaring unequivocally that Iraq’s annexation of Kuwait was illegal. On November 29, 1990, the Security Council passed 678, its twelfth resolution on the crisis, which empowered states to employ “all necessary means” to compel Iraq’s withdrawal and to force it into compliance with previous Security Council resolutions. Resolution 688 formed the basis for direct humanitarian intervention and enabled the United States, United Kingdom, and France to create a no-fly zone, a policy with which Turkey cooperated.

Also read: Interview with Dr. Daniel Pipes, on the occasion of the recent in Greek-Turkish tensions

The United Nation’s mission in Cyprus, which costs more than $50 million annually, is not meant to be a jobs program or to perpetuate Cyprus’ separation. To break the Cyprus impasse now requires a different approach. Too many countries have diluted sanctions or mitigated their approach to Turkey because of the size of Turkey’s military or economy.

Neither is a reason to allow Turkey to avoid accountability for its colonization and pillage. When the United Nations imposed its toughest sanctions to date on Iraq, Iraq had the fifth-largest army in the world. Today, Turkey’s army is just the fifteenth largest. The outrageousness of Iraq’s actions led even the more commercially inclined European countries to abide by sanctions despite its role as a major oil exporter. While Erdoğan says that Turkey seeks to become one of the world’s top ten economies, eighteen years of his rule now puts Turkey on the verge of falling out of the top twenty. And just as Saddam once sought to blackmail the world with human shields, threatened his own people, and promised retaliation against neighboring states, Erdoğan has threatened to weaponize both refugees and to leverage Turkish emigres against the European countries which had embraced them. Both threats were real, but they were and are reason to plan rather than give up.

Diplomats prefer go-slow approaches, but it is hard to fathom the approach they have tried for forty-seven years will suddenly begin to work. It is time for serious sanctions on Turkey. Rather than slowly ratchet sanctions up on Turkey in a way that allows Ankara to adjust and bypass them, the goal of the United States, European Union, and moderate Arab bloc should be to overwhelm Turkey and its already foundering economy. The Pastor Andrew Brunson case highlighted Turkey’s vulnerability to tariffs. The United States and European Union should shutter Turkish banks that operate in northern Cyprus or fund its operations. The European Union and United States should also ban Turkish Air and any other carrier that serves Turkish-occupied northern Cyprus from European airspace, and should sanction any Turkish or international company that does business in the occupied zone. All officials who serve in the illicit Northern Cypriot government should also face individual sanctions as should those who invest in Varosha or other occupied cities. All states should consider Northern Cypriot passports fraudulent. All states maintaining relations with Cyprus should also close representative offices of the Turkish Republic of Northern Cyprus in their territories. Rather than rely on Erdoğan’s goodwill, the United States, European Union, and Arab bloc might then lift sanctions only as the Turkish Republic of Northern Cyprus dissolves. The United Nations should consider an outright embargo on arms sales to or from Turkey.

There is no diplomatic reason to enable Europe’s longest occupation to continue past a half century or, with exploration for offshore gas, to allow Turkey to profit from it. An Iraq comparison does not mean military action, of course, although Cyprus and its allies do have the right to one day expel Turkish outposts on the island by force if other coercive measures fail.

Even those sympathetic to Turkey’s initial intervention have had little justification to maintain it for longer than a week. Indeed, as Turkey asserts further claims on Syria, Iraq, Armenia, and Greece, the cost of allowing Turkey to act without consequence is large. It is time for Erdoğan to decide: maintain the occupation or preside over a country in economic ruin.

Michael Rubin is a resident scholar at the American Enterprise Institute and a frequent author for the National Interest.