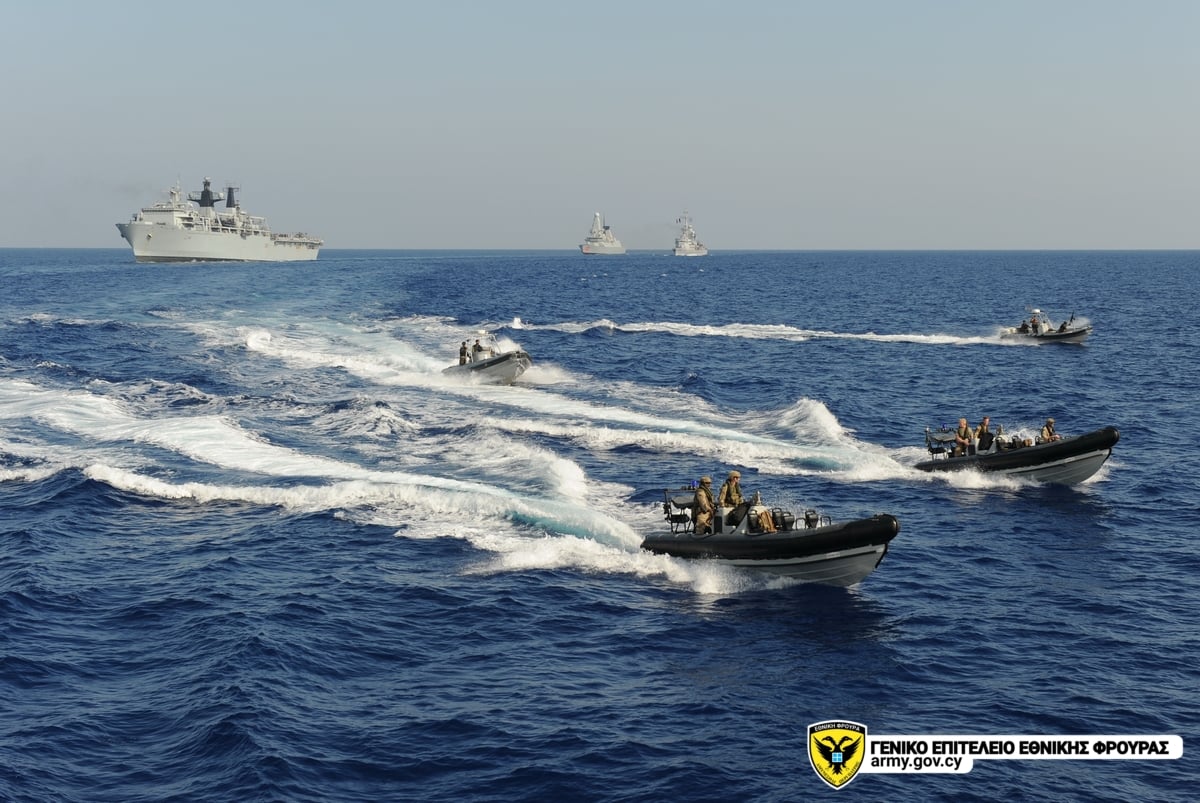 According to an announcement by the General Staff of the National Guard (GEEF), the joint training activities of the British Navy “Littoral Response Group (Experimental)” – [LRG (X)], which is currently located in the Eastern Mediterranean region, continued with the second (and main) Capabilities Demonstration Day.

The demonstration took place in the sea area of ​​the Gulf of Limassol and was attended by Vessels and Aircraft of the Republic of Cyprus, the United Kingdom and a French Navy unit.

In the “Capabilities Demonstration Day”, the UK participated with the Littoral Vessel HMS ALBION (L14), the HMS DRAGON Destroyer (D35), 2 Wildcat Helicopters and 2 Speedboats from the 42nd Commando/Juliet Company (UK Marines). The French presence in the exercise was made by the Frigate FS JEAN BART (D615), which is part of the LRG (X).The National Guard participated with the Offshore Patrol Vessel (OPV) Commodore IOANNIDIS (P61), 2 Speedboats and personnel from the Underwater Demolition Unit, as well as an ΑW-139 helicopter.

During the aeronautical activity, a dynamic demonstration (Dynamic Display) took place with the participation of Cypriot and UK Vessels and Aircraft. The demonstration, which was implemented in two sub-phases, included a fast rope descent from an AW-139 helicopter executed by an Underwater Demolition Team together with a simultaneous embarkment on a ship from a speedboat. Likewise, the second sub-phase included a fast rope descent from a Wildcat helicopter executed by a British Royal Marines’ team and a simultaneous embankment from a speedboat performed by an Underwater Demolition Team on OPV “Commodore Ioannides”.

In addition, delegations had the opportunity to tour a static exhibition on HMS ALBION, which included demonstration of armaments, a Wildcat Helicopter, diving equipment, Vehicles, UAVs and Drones, as well as specialized equipment and telecommunications equipment used by LRG (X) in amphibious operations. At the same time, a dynamic demonstration of a Special Operations Unit was held on HMS ALBION.

The Chief of General Staff congratulated all the participants on their performance, noting, among other things, that the presence of LRG (X) in Cyprus is a unique opportunity for joint training and tangible proof of the very good military cooperation between Cyprus and the UK.