Nagorno-Karabakh | Armenian defence in unfavourable position – Developments on the battlefield
Defence Redefined
Published on 05/11/2020 at 10:22 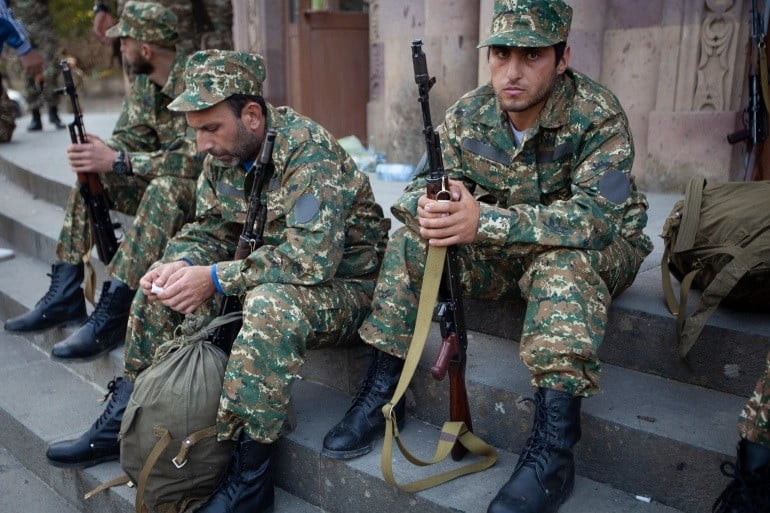 Since the beginning of November, the advance of Azerbaijani forces towards Lacin and the city of Susha in the disputed Nagorno-Karabakh region has slowed, compared to the advance made in the last 10 days of October.

The main factors of this event are the strong resistance of the Armenian forces which is still shown despite the huge losses, the complexity of the soil, the deteriorating weather conditions and the communication of the attacking units of Azerbaijan in the recently occupied territories.

Information mentions that Armenian sabotage units continue to operate and deliver tactical attacks in these areas. In addition, the nine villages, recently announced by Azerbaijani President Ilam Aliyev, are located in an area previously occupied by Azerbaijani forces. This, to some extent, shows the slowdown in the advance of the Baku forces on the war front.

Armenian sources say that at the moment Armenia is preparing a strong counterattack to push the Azeris south of Nagorno-Karabakh. They also claim that the only factor that allegedly stops Armenia from such a move at the moment is the commitment of the Armenians to the ceasefire agreements that Baku is blatantly violating.

Meanwhile, the Armenian side continues to publish daily information on Azerbaijan’s losses in the conflict. The Azerbaijani army reportedly lost 10 UAVs, 21 armored vehicles and 103 soldiers in recent clashes in early November. The large numbers of victims on both sides are widely confirmed by audiovisual material broadcast daily from the conflicts.

The claim of the Armenians that the Turkey-Azerbaijan bloc lost some of its strategic initiative in the war is at least overestimated. Azerbaijan’s artillery, drones and even Azerbaijani fighter jets continue to strike fortified positions, manpower and military equipment of the Armenian Defence Forces. The Armenians do not have enough means and countermeasures to protect supply flows and manpower from daily and heavy airstrikes.

As of November 3, Azerbaijani forces, openly supported by Turkish troops and Syrian fighters, continue to grow at an impressively short distance from Lacin and the city of Susa.

The loss of any of these points could signal the collapse of the entire Armenian defence in the region. Any large-scale Armenian counterattack, unless it inflicts a swift and devastating strike on the attacking forces, is unlikely to allow for strategic success.

Instead, it will expose the remaining Armenian units and increase the number of casualties from airstrikes, leaving them exposed to Azeri artillery. Azeris’ dominance in the air also means an advantage in target reconnaissance.

Under these circumstances, small tactical counterattacks aimed mainly at disrupting and damaging the advancing units of Azerbaijan seem to be the most likely scenario. Despite the lack of significant conquests by Azerbaijan in recent days, Armenia’s defence is still in crisis and if Ankara and Baku manage to ensure the communication and coordination of their forces, a new large-scale attack on the Lacin triangle – Susa – Stepanakert seems inevitable.

On a political level, diplomatic efforts for de-escalation have so far led to failure, as Turkey and Azerbaijan feel very close to the desired military victory. President Aliyev wants to go down in history as the leader who returned Nagorno-Karabakh to Azerbaijan, while his Turkish counterpart Tayyip Erdogan sees himself as the sultan of the New Ottoman Empire, pretending to be the leader of all Muslims in the Middle East, the Caucasus and Central Asia.

With information from: SouthFront / AMN / Reuters