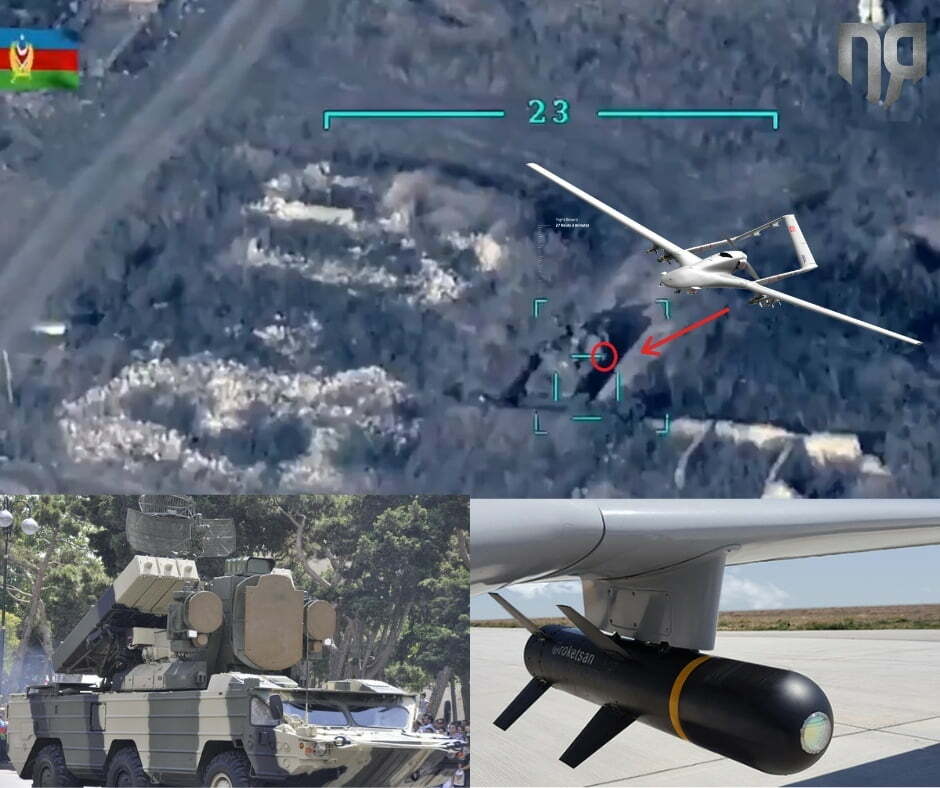 Videos circulating on social media show the destruction of Armenian type 9K33 OSA (SA-8 Gecko according to NATO) and 9K330 Tor (SA-15 Gauntlet against NATO) anti-aircraft systems by unmanned aerial vehicles (UAVs), possibly Turkish TB2 Bayraktar. The Ministry of Defence of Armenia did not confirm the authenticity of the videos, but unconfirmed information speaks of the destruction of 12 OSA systems.

1/3
Analysis of the videos posted by Azerbaijani MoD gives us grounds to assume that Turkish Bayraktar TB2 UAV's are most likely being used against #Artsakh pic.twitter.com/RuxE5T7bYD

Earlier, the Ministry of Defence of Armenia had released a video depicting the destruction of T-72 tanks which were allegedly in the possession of Syrian mercenaries operating on behalf of Azerbaijan.

This is being reported by many, chants of "Allahu Akbar" being pronounced in such a way as to suggest non-locals chanting them (i.e. possible Arabic-speaking mercenaries).

But it's not officially confimed as so yet by either side. #nagornokarabakh #armenia #azerbaijan https://t.co/McmdOJPoM3

Read also: Armenia – Azerbaijan | The first images from the clashes – The first losses for Azerbaijan – VIDEO

In addition, the Ministry of Defence of Armenia reports on the transfer of heavy artillery systems with a caliber of 300 mm such as Kasirga, Polonez and B (which both opponents have) by Azerbaijan.

It is recalled that, in addition to the older Russian anti-aircraft systems OSA, Armenia also has modern Tor-M2MK, S-300 and BUK M1-2.

At the diplomatic level, Russian Foreign Minister Sergei Lavrov stressed the importance of an immediate ceasefire in the Nagorno-Karabakh region and recourse to the negotiating table for a peaceful solution to the crisis, in intensive talks with all parties involved.

Dalso READ: Escalation of tension in Armenian-Azerbaijani border with dead and wounded

Meanwhile, references to the Armenian Defence Minister’s visit to Russia owing to the hostilities in Nagorno-Karabakh have been refuted by the Embassy of Armenia in Moscow, as the advisor on the diplomatic mission, Edward Djabazian, reported to Sputnik.

Today, European Council President Charles Michel called for an end to hostilities and an “immediate return to negotiations”.

“Military action must stop, as a matter of urgency, to prevent a further escalation. An immediate return to negotiations, without preconditions, is the only way forward..”

At the same time, France called on Yerevan and Baku to cease hostilities and resume talks immediately.

Regarding the situation in Armenia, the Armenian Prime Minister, Nicole Pasinian, declared martial law and full mobilization, as a result of the escalation of tensions in the claimed region of Nagorno-Karabakh.

On his part, Azerbaijani President Ilham Aliyev swore allegiance to his country’s victory over Armenia.

“On Sunday morning, the Armenian Armed Forces began bombing military positions and settlements along the line of contact,” Aliyev said.

“This is another military challenge from Armenia,” he said. “As a result, there have been casualties among the military and civilians of Azerbaijan,” Aliyev said in a televised address.

With information from: sputniknews.gr, CNA