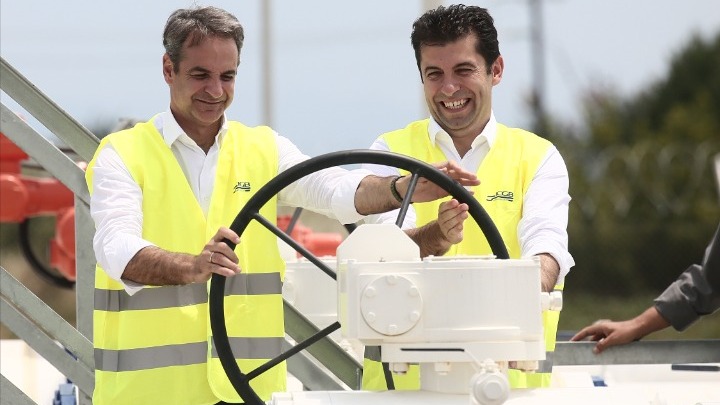 The natural gas transmission valve on the IGB pipeline was jointly opened by the Prime Ministers of Greece, Kyriakos Mitsotakis, and of Bulgaria, Kiril Petkov, immediately after the completion of the pipeline’s inauguration ceremony.

Wearing protective helmets and fluorescent vests, the two Prime Ministers climbed onto the small platform that provides access to the valve and turned it on while being applauded by the ceremony attendees.

In his speech, Mr. Mitsotakis said that in addition to the natural gas pipeline, the IGB is also a pipeline of shared values ​​between Greece and Bulgaria, which will convey the message of national security, Balkan solidarity, transnational cooperation and prosperity of the peoples as well as a decisive energy bridge that geographically connects the south with the north.

“The pipeline will constitute, together with the rest of the energy infrastructures that are being launched, together with the connecting axes with North Macedonia and Italy, a reliable natural gas transmission network to the markets first and foremost of the Balkans and of Europe itself, diversifying its sources of supply. They thus strengthen the energy security and supply security of all connected countries. And they become a “barrier” in the artificial rally of energy prices which – as you know – burden the budgets of households and businesses,” he continued.

According to APA MPA, after the completion of the inauguration ceremony, the two Prime Ministers had a private meeting.

Also read: N. Pilidou | “Our country is expected to export natural gas by 2026”

Listed in the European Union’s Projects of Common Interest and supported as a national priority project by the governments of Greece and Bulgaria, the IGB is an important part of the European energy infrastructure as it improves the connection of the countries of south-eastern Europe with the Southern Corridor of natural gas supplies.

The operation of the IGB, whose commercial operation is scheduled to kick off in the fall, no later than October 1, certifies and enhances Greece’s position as a gateway for energy inflows to Europe via alternative routes, at a time when the European Union is working towards independence from Russian fossil fuels.

The project also underlines the strategic importance of northern Greece in the government’s planning and the energy map of the wider region, as in combination with the floating storage and regasification unit (FSRU) for liquefied natural gas off Alexandroupolis – currently being constructed – it substantially improves the vertical interconnection of the Greek system with the markets of the Balkans and Eastern Europe.