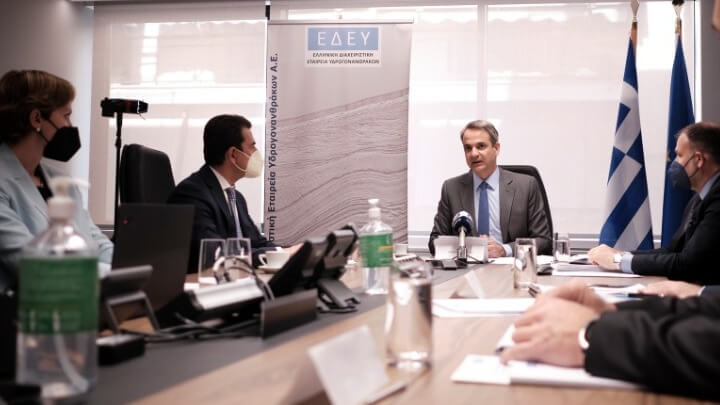 “We are announcing today the precipitation of gas extraction explorations that we know our country is likely – I underline that as we are not yet sure – likely to have in significant quantities based on preliminary studies, both on the mainland and at sea,” stated the Prime Minister, Kyriakos Mitsotakis, during the meeting he chaired in the morning at the headquarters of the Hellenic Hydrocarbon Management Company (EDEY).

“I am therefore very happy that we are given the opportunity today to be able to make a fresh start in this process. And I want to reiterate once again that when it comes to research in the field of gas and hydrocarbons, no one can ever be sure of the result. We have clues – I repeat – clues that make us moderately optimistic. However, as a country, we must know for sure if there are gas reserves which are economically exploitable,” added Mr. Mitsotakis.

The interest, as discussed during the meeting, is focused on six areas, according to the APA MPA. “One is located in mainland Greece, in the Region of Epirus, at a point – I emphasize – where there will be the maximum possible environmental protection. Five in sea areas, two in the Ionian, two in Kyparissiakos, two west-south of Crete,” the Prime Minister noted. Referring to the first timeline stages, the Greek Prime Minister stressed that “by the end of 2023 we must know if we have exploitable quantities of natural gas so that we can then proceed with their exploitation.”

“On the part of the Greek State, on the part of the Ministry, we are committed to upgrade all relevant projects to projects of national importance in order not to repeat unnecessary delays. And we will upgrade EDEY, the Greek state-owned company, which coordinates and licenses this whole process, so that – if necessary – it also assists in exploration efforts,” he added.

Mr. Mitsotakis pointed out that the current situation and the Russian invasion of Ukraine have highlighted Europe’s “structural energy weaknesses”, with consequences for all European citizens, but at the same time, it has changed the gas market and the production arm.

“I want to emphasize that until the Russian invasion of Ukraine, the commercial exploitation of new gas fields was often not an economically attractive opportunity for new countries entering this game, such as Greece, due to the very low gas prices. This, however, has changed along with the course of gas prices internationally, the plans for detachment from Russian gas, but also the importance that we know that gas will play for years to come, for decades to come, as transition fuel essentially forces us to redefine our strategy,” he explained.

The Prime Minister clarified, however, that the precipitation of exploration for hydrocarbon deposits will not affect the smooth implementation of the goals set by the country for the green transition of the economy.

“My order to speed up gas exploration does not in any way undermine the government’s commitment to lead the green transition. Our goal is very simple: If we have exploitable quantities of natural gas, to replace gas imports with national wealth,” he said.

“This new road by no means diverts us from the long-term goals of reducing carbon dioxide emissions. It is simply an alternative path to reach the same goal and it is an alternative path imposed by political realism. It will lead us safely, with lower costs and without delays until 2030, to the goal of achieving a reduction of emissions by 55%, as we have agreed at the European level,” added Mr. Mitsotakis.

Also read: KYSEA | Extraordinary meeting on country’s energy security in the shadow of the Ukrainian crisis

“In order to serve the new national goal, as described by the Prime Minister, the Ministry of Environment and Energy will do three things: First, we will ask for a new task force, which will closely monitor the progress of investigations to find potential exploitation of gaseous hydrocarbon deposits. Secondly, we will make the necessary legislative interventions to shorten the times and facilitate the investigations. Thirdly, a letter will be sent to the concessionaires by EDEY, which will inform them of the decisions of our government and the new strategy for precipitating the investigation and will ask them to submit their intentions immediately,” noted Mr. Skrekas

“I am very happy because the pieces of a difficult puzzle are starting to come together. Ever since we took over the management of EDEY, in the summer of 2020, we have worked silently and systematically with the belief that what we are discussing today can be useful and can also be achieved. The visit of the Prime Minister today fills us with responsibility and the obligation to intensify our effort in order to be efficient,” said, on his part, the CEO of EDEY, Aristophanes Stefatos.

“The will that is being expressed today and the strategy to exploit hydrocarbons and especially the natural gas potentially found in Greece can only be correct and does not change in any way the strategy regarding the issue of Renewable Energy Sources and energy transition,” pointed out the CEO of Hellenic Petroleum (ELPE), Andreas Siamisis.

“I would like to emphasize that we have recently completed the two-dimensional seismic surveys in two areas in the Ionian – in the Ionian and in Kyparissia – with absolute success and with the highest level of environmental protection that such a process could have,” added Mr. Siamisis.

“We are pleased to announce that we are proceeding with the first drilling which will take place in Greece after 22 years. The drilling in the region of Epirus will take place in an area – as the Prime Minister said – far from the especially environmentally sensitive areas,” underlined the CEO of Energean, Mathios Rigas.

“And I would like to send a message to all the local communities, who may be worried or afraid, to see the example of Prinos, where for 41 years now oil and gas have been produced without the slightest impact on the region, with absolute harmony with the local tourism industry, fisheries, and local communities,” added Mr. Rigas.

The meeting was also attended by the Secretary-General of Energy and Mineral Raw Materials, Alexandra Sdoukou.