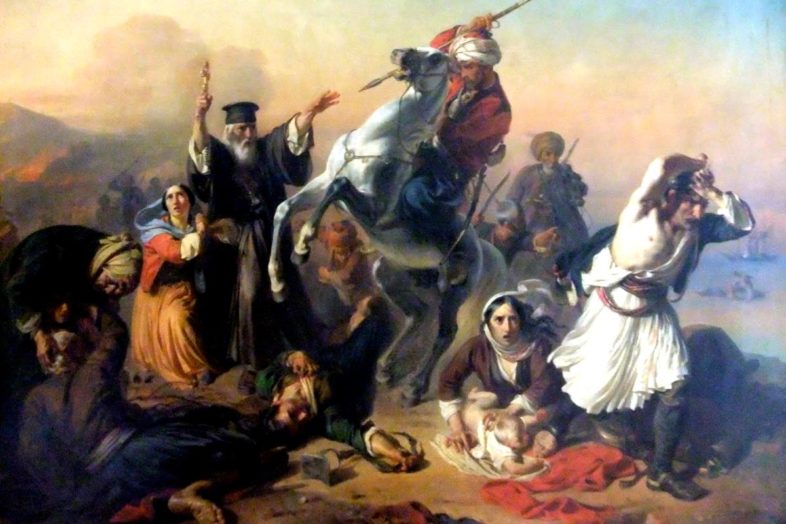 On March 30, 1822, in retaliation for the proclamation of the revolution in Chios by Lycurgus Logothetis, the Ottoman Turks slaughtered tens of thousands of Greeks.

The Greeks of Chios, 117,000 in numbers, had a huge merchant fleet and dominated the Black Sea, the Aegean and the Mediterranean. The huge commercial and diplomatic power of Chios urged the Sultan to grant the island many privileges, which reached the status of autonomy.

This did not allow the ruling classes of Chios to rise up against the Turks, while the most serious argument for not doing so lies in the fact that Chios was nearly two miles from the Asia Minor inland, thus any rebellion attempt was doomed to failure.

However, on March 10, 1822, Samios Lykourgos Logothetis, urged by Antonios Bournias – from Chios – landed on the island with 1,500 men and managed to incite the locals, mainly the villagers. The Turks of Chios, around 3000, were locked in the castle which was under siege by the Greeks for a few days without any result, due to the inadequate training of Logothetis’ men.

As soon as the High Gate was informed about the Greek uprising in Chios, Sultan Mahmut II took it as an ingratitude of Chios, but also as a personal insult, because his sister was reaping the benefit of the taxes from the mastic trees of the island. He then ordered the imprisonment of all the residents of Chios and the beheading of sixty of them. The Sultan’s next step was to order Kara-Ali Pasha to sail to the island and punish the rebels.

Also read: November 24, 1826 | Karaiskakis crushes the Turks in Arachova and rekindles the revolution

Thus, on March 30, 1822, and after intense shelling of the island, Kara-Ali Pasha had 7,000 men landed on the shore and, with the help of the Turkish guard, they easily and quickly suppressed the uprising, taking into advantage its poor planning and disputes over leadership between Bournias and Logothetis.

All the surroundings and the capital of the island were set on fire and the Turks caused massacres and atrocities. It is estimated that out of the 117,000 Christian inhabitants of the island, 42,000 were slaughtered, 50,000 were taken prisoner and 23,000 fled to the rebel areas of Greece and Western Europe. The Turks lost about 600 men and casualties were reported among the Jews, who were deported from the Asia Minor coast to the island to loot and monitor the slave trade.

The events in Chios caused distress in Europe. Public opinion rose and the ranks of the Philhellenes increased. Eyewitnesses described the horrific scenes in the newspapers, painters such as Delacroix portrayed them, and poets such as Hugo, Hemans, Pierpont, Hill and Sigourney chanted the sad catastrophe.

Many spoke of the incompatibility of the Turkish race with humanity, while others stressed the impossibility of coexistence of Christians and Muslims. The Greek nemesis will come soon, with the explosion of the Turkish flagship of Kara-Ali by Konstantinos Kanaris on June 6-7, 1822.