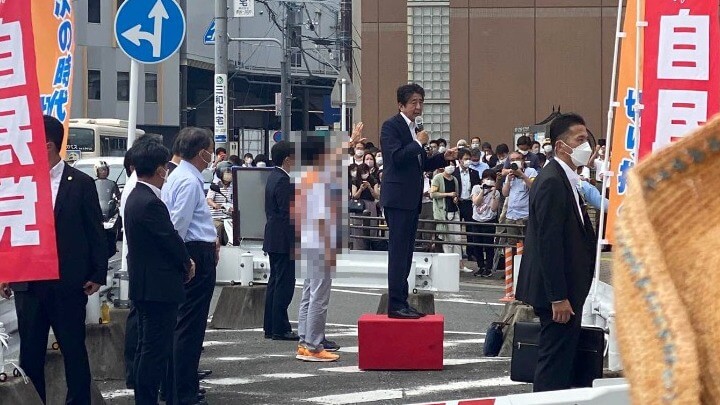 Japan’s former Prime Minister, Shinzo Abe, succumbed to his injuries today hours after he was shot while campaigning for parliamentary elections, shocking the country with rare political violence and strict gun control.

A man opened fire on 67-year-old Abe from behind with what appeared to be an improvised weapon, while the former Prime Minister was giving a speech in the western city of Nara, Japanese media reported. Abe was giving a campaign speech outside a train station when two shots were fired. Security personnel were seen pulling a man wearing a gray t-shirt and beige pants into the street.

Kyodo news agency earlier carried a photo of Abe lying face down in the street with blood on his white shirt. People were gathered around him and someone was giving him chest compressions. Nara emergency services said he had suffered injuries to the right side of his neck and left collarbone. His brother, Defence Minister Nobuo Kishi, said Abe was receiving blood transfusions.

It is the first assassination of a sitting or former Prime Minister in Japan since the 1930s, reports APA MPA. The hospital that tried to save him announced that Shinzo Abe died at 5:03 p.m. (11:03 Greek time), about five and a half hours after he was shot. A doctor said Abe died of profuse bleeding from two deep wounds, one of which was on the right side of his neck. When he was taken to the hospital, he had no vital signs.

The police announced that a 41-year-old man was arrested for the attack on Abe. According to NHK television, his name is Tetsuya Yamagami and he told police he was dissatisfied with Abe and wanted to kill him.

Japanese police raided the home of the suspect in the assassination of the former Japanese Prime Minister, according to images broadcast by public broadcaster NHK. The footage depicted the police wearing protective gear, helmets, and shields entering a building identified by NHK as the home of the man who was arrested after the attack on Abe.

The reasons for the dissatisfaction of the perpetrator, who is a permanent resident of Nara, are not yet clear. According to Japanese media, the perpetrator is a former member of the Japanese Navy, about 40 years old, and used a homemade rifle for the attack, which was confiscated.