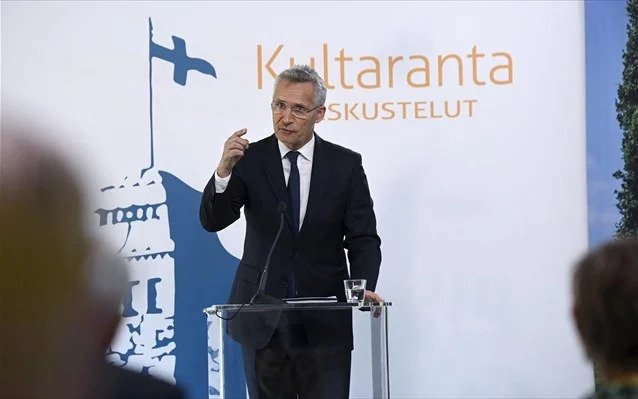 Stoltenberg visited President Sauli Niinisto and stressed that it was important to note that no other NATO ally has suffered more terrorist attacks than Turkey, and so its concerns need to be taken seriously.

Stoltenberg said Turkey was an important ally for NATO given its strategic position in the Black Sea between Europe and the Middle East and referred to Turkey’s support for Ukraine since the start of the Russian invasion on February 24.

He further added that Turkey’s opposition against Sweden and Finland’s NATO membership applications could not be resolved in time for the Alliance’s summit scheduled for later this month, although he said NATO is “working hard” trying to resolve the “legitimate” issues raised by Turkey.

In the past, the NATO Secretary-General insisted that both countries be accepted “with open arms”, but Turkey objected to their applications. Ankara accuses them of offering refuge to the Kurdistan Workers’ Party (PKK), an organization that Turkey and its Western allies describe as “terrorists”.

“I would like this issue to be resolved as soon as possible,” Stoltenberg said at a joint news conference from Finland with Finnish President, Sauli Niinisto. However, “the Madrid summit was never a deadline,” he stated.

In early June, during a visit to Washington, Stoltenberg said his “intention” was to settle the issue before the NATO summit, which begins on June 28.

The two Scandinavian countries have repeatedly expressed their surprise at Turkey’s objections, noting that Ankara had expressed support for their membership applications until they submitted them.

The two countries applied for NATO membership after Russia’s invasion of Ukraine, however, their approval requires a “yes” from all 30 member countries of the North Atlantic Alliance.