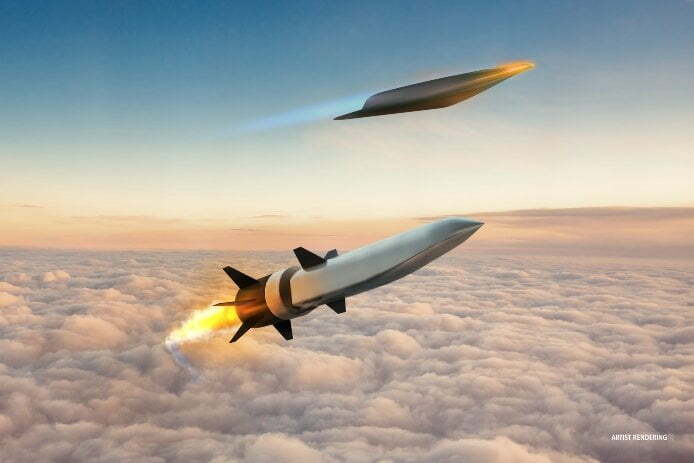 On the occasion of the recent announcement of Lockheed Martin for the successful test of the second AGM-183A Air-Launched Rapid Response Weapon (ARRW), we bring you the latest developments around the hypersonic weapons of the future, which are a milestone in the defence industry.

Hypersonic weapons that will develop speeds of Mach 5 or 6125 Km/h and above are currently “unstoppable” by existing anti-ballistic missile systems. Due to their speed, their kinetic energy will be so great that it will be enough to cause great destruction in a specific area even without the addition of an explosive warhead.

The successful test of ARRW, as announced by Lockheed Martin, took place on 08 August by a B-52 Stratofortress aircraft of the United States Air Force (USAF). The purpose of the test was to collect thermal, mechanical and digital data from the flight vehicle. Lockheed Martin says this was the first time an ARRW tactical missile had been assembled, with additional ground and flight testing to follow over the next two years.

Lockheed Martin is currently developing beyond the ARRW, the Intermediate Range Conventional Prompt Strike (IRCPS) and the Long-Range Hypersonic Weapon (LRHW). IRCPS involves the development and testing of a hypersonic boost glide missile that enables longer range, shorter time of flight and high survivability against enemy defences. LRHW will leverage the common hypersonic glide body and introduce a new class of ultrafast and maneuverable long-range missiles with the ability to launch from ground mobile platforms.

Raytheon in turn plans to develop hypersonic weapons in collaboration with Northrop Grumman as well as to upgrade its radar systems. Specifically, the company is modernizing its surface radars with gallium nitride (GaN) technology to enhance range, increase detection and discrimination performance.

According to Raytheon Missiles and Defense, this new technology lowers production costs when manufactured at scale and offers increased power over its predecessor, gallium arsenide (GaAs).

In addition, the company develops space-based sensors for a proposed satellite constellation to help track hypersonic missiles remotely. Space-based sensing offers persistent sensing, tracking and remote targeting, as opposed to ground-based sensing which is limited by the Earth’s horizon.

Regarding the development of similar weapons by Russia and China, we remind you that Russia, with an announcement by the Minister of Defence Sergey Shoigu on December 27, 2019, has put into operation the hypersonic glide vehicle Avangard. This weapon, manufactured by JSC Votkinsk Machine Building Plant, has the ability to carry a nuclear warhead up to 2 megatons. The speed of the weapon, according to the Russians, exceeded Mach 20, with many analysts, however, expressing reservations about the reports of the Russian Ministry of Defence.

China unveiled for the first time in the parade on October 1, 2019, the DF-ZF which is considered to be a hypersonic missile that is mounted on the DF-17 ballistic missile, while continuing the program of research and development of similar weapons.

Historically, ultrasonic weapons require the solution of various technical challenges for the defence industry, namely in the following areas:

At hypersonic speeds, friction and air resistance create an incredible amount of heat, which needs to be managed through tough but lightweight heat shields and thermal protection systems. Instruments, like sensors and electronics, must also be equipped and protected to stand up to these extreme conditions.

Hypersonic systems are designed to operate in hostile environments and must be capable of overcoming layered air defence levels. In addition, for a supersonic weapon system -that travels a distance of almost 1.6 Km (1 mile) per second-, the degree of accuracy in its navigation is extensive.

Basic functions, such as communications, are a major challenge during hypersonic flight. A weapon system must maintain connectivity to operators via global communication systems and sensors.

In terms of their use, according to the RAND Corporation, at least 23 countries are promoting hypersonic weapons for military or civilian use. The US, Russia and China are currently the leaders in this area. RAND believes that ultrasonic weapons will become operational in the next decade. However, as RAND reports, a US-Russia-China agreement would be needed to control these weapons.