SECURITY
Greece – Egypt agreement on the employment of seasonal workers in the agricultural sector
Defence Redefined
Published on 23/11/2022 at 12:36 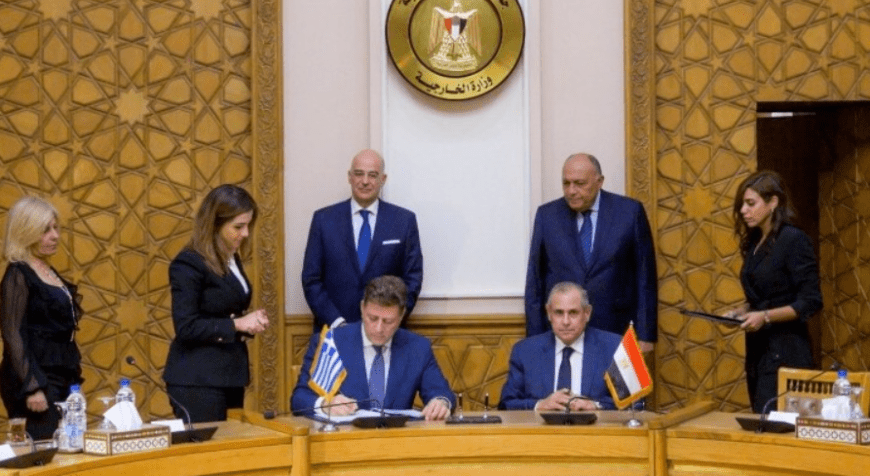 A bilateral agreement on the employment of 5,000 seasonal farm workers from Egypt in Greece was signed yesterday in Cairo by Deputy Foreign Minister, Miltiadis Varvitsiotis, and his Egyptian counterpart for European Affairs, Ihab Nasr. The said agreement was signed in the presence of the Foreign Ministers of the two countries, Nikos Dendias and Sameh Soukry.

The interstate agreement, signed for the first time at a diplomatic level, provides for the entry and residence in Greece of the labor force from the Arab Republic of Egypt. These workers will be employed on a seasonal basis in the agricultural sector, according to a statement by the Deputy Minister of Foreign Affairs.

It is noted that these are 5,000 farm workers, during the first year of pilot implementation, with a duration of stay of up to nine months per year and that the Agreement aims to meet labor needs in the agricultural sector. Furthermore, the agreement can be a “guide” for future agreements of our country, but also of the entire EU with third countries to counter illegal immigration.

After the signing, Mr. Varvitsiotis emphasized that upon signing of the Agreement with Egypt, a request of the Greek region is met, which needs more workers so as to face the growing needs of the agricultural sector, while at the same time a huge step is taken, as for the first time, Greece creates conditions for legal immigration within the framework of an international agreement.

As he explained, according to his announcement, the Egyptian authorities will choose which Egyptians can come to work in our country for a certain period of time and who will have the obligation to return after this cycle is complete.

Further highlighting the importance of the Agreement, the Deputy Minister of Foreign Affairs described it as a model of cooperation between Greece and the EU with third countries in dealing with illegal immigration. Referring to the Agreement, Foreign Minister, Nikos Dendias, said that it will allow the transfer of the necessary human resources for the Greek economy from the friendly country of Egypt.

In accordance with its content, the Agreement provides for the operation of the Joint Committee, which consists of an equal number of representatives of the two parties who will be responsible for the issues to be examined. This Committee will meet alternately in Athens and Cairo at least once a year.

Earlier, the Minister of Foreign Affairs and the Deputy Minister attended the signing of the Memorandum of Understanding (MoU) between the governments of Greece and Egypt on cooperation in the Aeronautical and Maritime Search & Rescue Sectors by the Ministers of National Defence of the two countries, Nikos Panagiotopoulos and Mohamed Zaki.