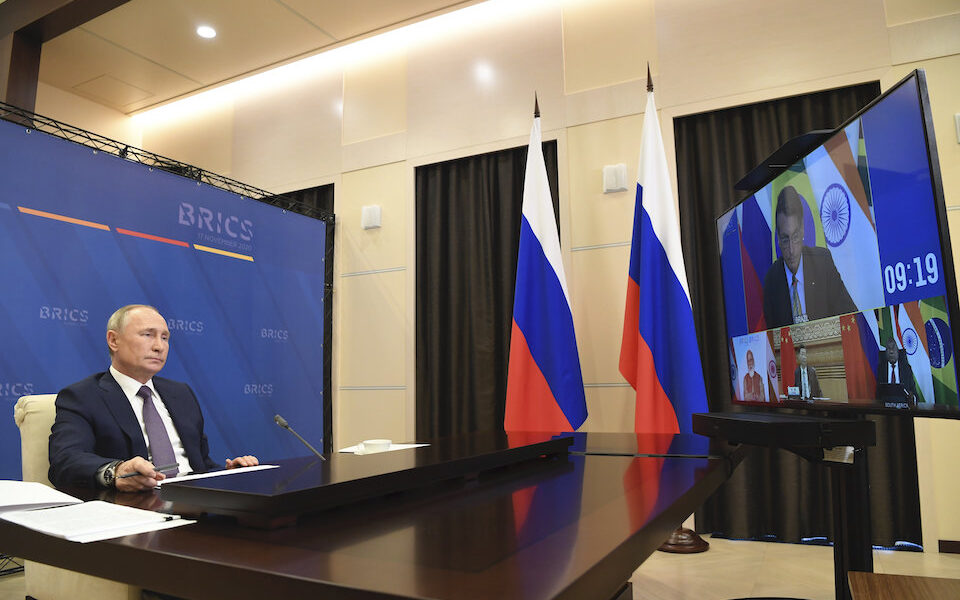 US President, Joe Biden, and other Western leaders met in Munich yesterday for the G7 summit.

Among the priorities set by Germany since taking over the G7 last January were economic stability, preparedness for health crises, sustainable investment, and partnerships for a sustainable planet. Yet the main issue is still Ukraine and the confrontation between the West and Russia.

The course of the war in Ukraine, the arms race, the sanctions against Russia, the attitude of the West, and especially the crises that threaten global food security and European energy security will be considered by the leaders of France and Germany, the USA, Japan, Italy, Canada, and Great Britain.

Russia, which was excluded from the G8 in 2014 after the unilateral annexation of Crimea to the Russian Federation, continues to cast a heavy shadow over developments due to the war in Ukraine.

However, the leaders of Brazil (B), Russia (R), India (I), China (C), and South Africa (S), from the countries of the group known by the acronym BRICS, held a teleconference on the eve of the annual meeting in Germany of the leaders of the world’s seven most developed economies (G7).

The 14th BRICS Summit, hosted by Chinese President Xi, focused on global development in the new era. The Chinese President voiced his opposition to sanctions on Russia and spoke of a time of great “turmoil and transformation”, calling for stronger cooperation, solidarity, and peace. “Confrontation between hegemonic blocs will not bring peace and security, but only war and conflict,” Xi said.

For Russian President, Vladimir Putin, this is the first multilateral international summit he has taken part in since Russia’s invasion of Ukraine last February. His participation in the BRICS summit is a major victory for Putin, as the Russian President wants to show that his position in the global South is not as diminished as the United States and its allies hoped.

In fact, three of its members – China, India, and South Africa – abstained from voting at the UN General Assembly, avoiding condemning the Russian invasion of Ukraine. Beijing and New Delhi, in particular, have close diplomatic ties with Moscow and are buying increasing amounts of oil, while Brazil imports large quantities of fertilizers from Russia.

At this year’s G7 Summit, the German Presidency, in addition to the Ukrainian President, Volodymyr Zelensky, has also invited leaders of BRICS countries due to their economic ties with Russia, such as South Africa and India. Argentina, Indonesia, which currently holds the G20 Presidency, and Senegal, which holds the rotating Presidency of the African Union, have also been invited to the G7 summit. Argentina wants to join the BRICS and was also invited to the Beijing summit. Indonesia, which will also attend the G7 summit, is considered a BRICS candidate country.

On the other hand, Beijing’s goal is to expand the BRICS, by forming a “BRICS Plus” group. This will include Argentina, Egypt, Indonesia, Kazakhstan, Nigeria, the United Arab Emirates, Saudi Arabia, Senegal, and Thailand representing emerging and developing countries.

The expansion of BRICS to include new members has essentially been decided. The implementation of the decision depends mainly on the consent of India, which wants to avoid shifting the balance within the alliance to China.

On the other hand, of course, it is worth noting that there are differences among these countries, mainly on the China-India axis, while the leading role claimed by Beijing within this group is not automatically accepted by other members.

It is worth noting that India, for example, belongs to the BRICS group along with China, but also to the Quad group (Australia, India, the USA, Japan) against China.

China is by far the biggest economic power and sees itself as the group’s leader. This was never accepted by India, which is at odds with China over its disputed Himalayan border. Indian leader Monti also wants to keep India neutral in Ukraine because it needs Russian oil, but at the same time remain in US-led alliances to counter Chinese influence.

Xi and Putin outlined their plans to create a currency for international trade based on a “basket” that would include all the currencies of the countries concerned, an alternative to the dollar and the euro. If so, it would be the number one threat to the global dollar reference role.

For example, former Brazilian President, Lula da Silva, a candidate in the October elections, has explicitly proposed the creation of a new currency, the Sur, to be used in Latin American trade so that the region does not continue to depend on the dollar. This proposal is also supported by Argentina.

Following the G7 Summit, the NATO Summit in Madrid is scheduled for June 29-30, where the main issue on the agenda is also the situation in Ukraine and the Pact’s strategy towards Russia. The accession of Finland and Sweden is also crucial, with Turkey insisting it will veto despite concerted efforts to curb Turkish President Tayyip Erdogan’s objections.