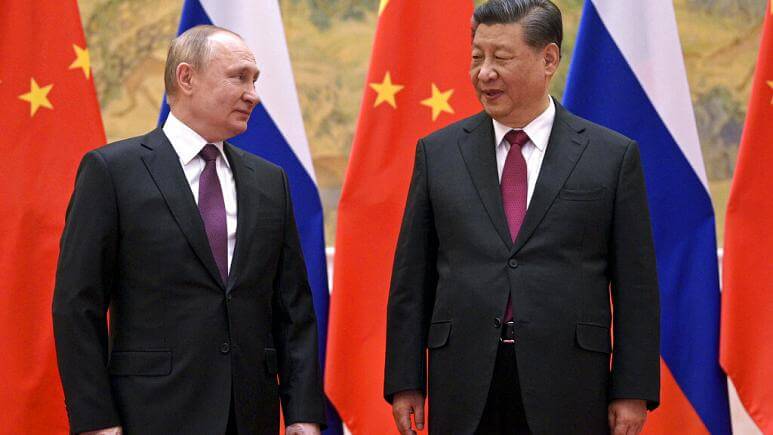 The Foreign Ministers of Russia and China have condemned the West’s illegal and counterproductive sanctions against Moscow over Ukraine, the Russian Foreign Ministry said in a statement.

Chinese Foreign Minister, Wang Yi, had talks with his Russian counterpart, Sergei Lavrov, in the eastern Chinese province of Anhui, where a two-day summit on Afghanistan will be held.

The meeting comes a month after Russia sent thousands of troops to Ukraine in a “special operation” – as Russia describes it – triggering unprecedented Western sanctions.

“The parties noted the counterproductive nature of the illegal unilateral sanctions imposed on Russia by both the United States and its satellites.”

The Ministry said the two Ministers had agreed that Russia and China would continue to strengthen their strategic cooperation and talk about international affairs “in one voice”. “It was agreed to further strengthen foreign policy coordination and expand co-operation in the bilateral field and in various multilateral structures,” the Ministry said.

Also read: Ukrainian crisis | Russia claims that the first phase of the “special operation” is being completed

Lavrov, who said Russia’s relations with China were at the strongest level ever, went to China for talks with Wang as a host, who was to include representatives from the Taliban ruling Afghanistan and from Pakistan, Iran, Tajikistan, Turkmenistan, and Uzbekistan.

Russia is looking to China for support and cooperation as it increasingly isolates itself from global financial systems and supply chains.

Beijing is under strong pressure from the West not to support Moscow in its military operations in Ukraine. In fact, US President, Joe Biden, recently described to his Chinese counterpart, Xi Jinping, during a video conference “the implications and consequences” if Beijing provides material support to Russia.

Moscow-Beijing ties are very strong, although in recent weeks China has been trying to maintain a more “neutral” stance on the invasion. The goal of the Chinese leadership, according to analysts, does not seem to be the alienation of any of its most important rivals on the world stage.

In an attempt to restore ties with the West, President Xi Jinping and Prime Minister Li Keqiang will meet with European Union leaders on April 1, the Chinese Foreign Ministry said today. This is the first confirmation from China that a China-EU summit will be held this week. This meeting has been postponed several times amid a deterioration in relations between the two sides.

The leaders will meet via teleconference, Foreign Ministry spokesman, Wang Wenbin, said during a regular briefing of reporters in Beijing.