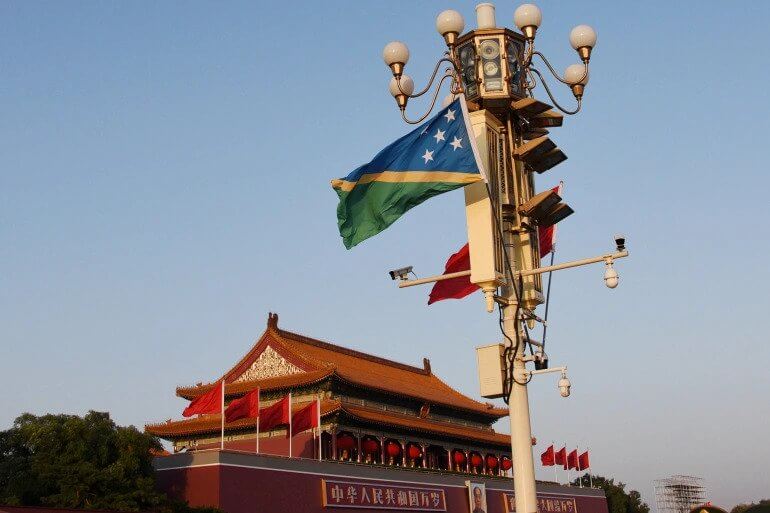 China announced yesterday that it had recently signed a broad defence agreement with the Solomon Islands, as the United States, Australia, and New Zealand worry about Beijing’s military ambitions in the Pacific.

Last week, Australian Minister for International Development and Peace in the Pacific, Zed Cecilia, traveled to Honiara to ask Prime Minister, Manasseh Sogavare, not to sign the agreement.

Canberra is worried that this security agreement, the details of which have not been made public, will pave the way for China to establish a military presence in the Pacific Islands, less than 2,000 kilometers from Australia.

The United States is also reacting to the bilateral agreement, with State Department spokesman, Ned Price, saying Monday that the Solomon Islands are already protected by a security agreement with Australia.

At the same time, Washington announced that a diplomatic mission of the country will make a tour of the Pacific islands this week.

The mission will be led by Curt Campbell, National Security Officer for the Asia-Pacific region, and Daniele Crittenbrink, Deputy Foreign Minister for East Asia and the Pacific.

It is noted that Britain, the United States, and Australia have expanded the AUKUS defence agreement so as to develop hypersonic missiles in order to oppose Russia and China.

The focus on hypersonic missiles and their technology was not accidental though. Just last month, Russia said it had used a hypersonic missile to destroy a weapons depot in western Ukraine and the US intelligence service has said that Russia has repeatedly used hypersonic weapons.

But China has also conducted two tests of hypersonic missiles in recent months, proving that the development of this technology is at a more advanced stage than the West estimated.

It is noted that although the United States and Australia already have a joint program to develop hypersonic weapons, the British side has not yet committed to their purchase as it wants to focus on the study of the development of defence systems against these new weapons.

However, the United States has announced that it has passed the test phase, as last month it carried out the first successful test launch of its own hypersonic missile (HAWC).

Also read: Re-election for Vucic and Orban amid Ukraine war