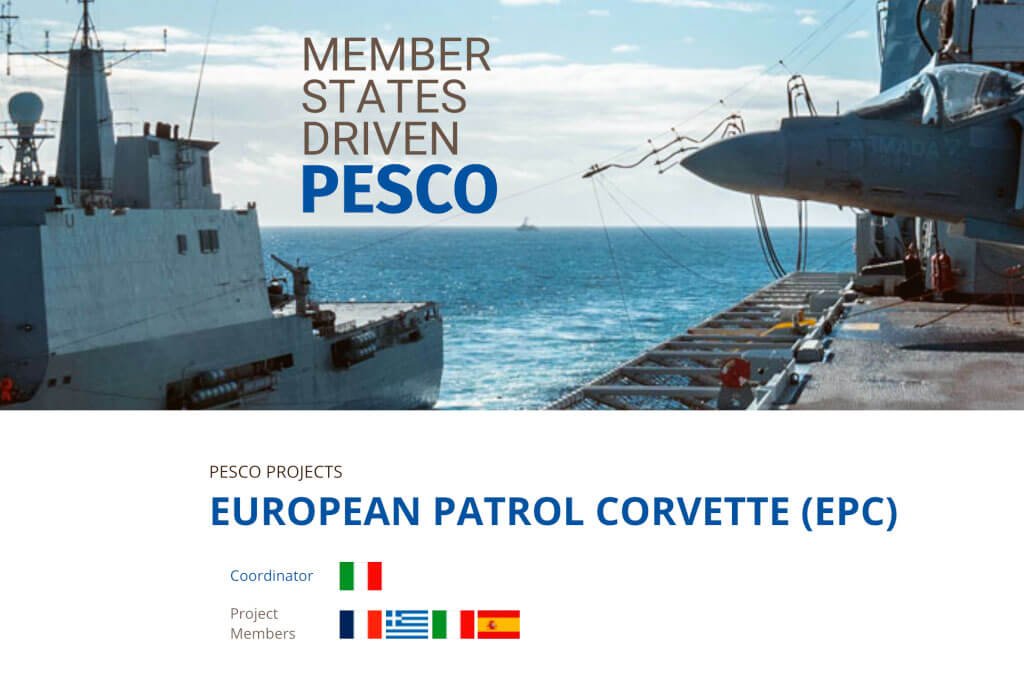 In fact, the Italian Navy is the leader of the European Patrol Corvette (EPC) project, a ship designed in coordination with some of the EU Navies and which will be built by four companies from three different countries, including the Italian giant Fincantieri.

“The meeting was very successful and represented the first industrial engagement regarding the EPC project, from which many useful ideas emerged. This sharing of high-level requirements outside the government sphere is in fact fundamental for the continuation of the project, also in consideration that the deadline of the European tender announced by the European Defence Fund, a financial instrument of the EU Commission which, together with the PESCO projects, aims to develop European Defence, will expire on 9 December,” says Lieutenant Commander Andrea Quondamatteo, head of the project for the Italian Navy.

This is the most important project in the naval sector in the context of the EU Permanent Structured Cooperation (PESCO) in defence. It was approved by the EU Commission on November 12, 2019. The first country to join Italy was France, followed by Greece and Spain. Portugal remains an observer for the moment, i.e. it participates in the meetings, but reserves the right to join the project at a later time.

The European corvettes will be affordable, environmentally sustainable, energy-efficient, and very versatile patrol vessels. They will be able to carry out maritime security and offshore police operations, to be used in the fight against terrorism and illegal trafficking, but also for anti-pollution competition activities and emergency interventions in the event of natural disasters.

The European Corvette Project is a common platform, a shared base, which can be tailored to the needs of member states. The overall displacement will not exceed 3,000 tons, which will allow the ship to operate also from smaller ports. The length of the ship, to be powered by diesel and/or electric engines, will not exceed 110 meters.

Two versions of the corvette have already been outlined. Italy and Greece have agreed on the Full Combat Multipurpose configuration. Spain and France, on the other hand, are interested in the Long Range Multipurpose one. The need of Italy and Greece is to have a patrol vessel to be used in the wider Mediterranean, with a specific focus on the central and eastern Mediterranean, mainly for presence and surveillance tasks, equipped with a variety of systems aimed at guaranteeing adequate self-defence capability. On the other hand, France and Spain need a ship with extended autonomy to be able to carry out activities in overseas territories.

From an industrial point of view, NAVIRIS (the joint venture created between the Italian giant FINCANTIERI and the French NAVAL GROUP) coordinated the creation of a consortium together with FINCANTIERI, NAVAL GROUP, and NAVANTIA to present itself as a single entity and compete for access to the European Defence Fund, with the intention to win the competition in the race. The terms of submitting applications will expire on December 9.

The participating Member States aim to develop their first prototype starting in 2027. If everything goes smoothly, in the Greek case the “Eurocorvette” could be a serious candidate for the upgrading of the surface fleet after 2030.