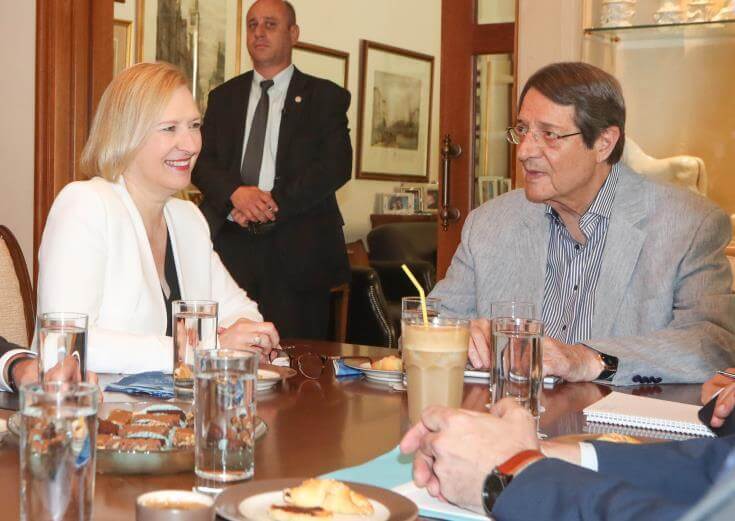 The UN official is leaving her post in Cyprus at the end of this month. The Canadian diplomat has served as the UN Secretary-General’s Special Representative and head of the United Nations peacekeeping force on the island for the past five years.

In addition, the President of the Republic, Nikos Anastasiadis, stressed on Thursday that we are ready for a tripartite meeting with the UN Secretary-General, noting that the Turkish-Cypriot side is not as ready for similar dialogue and consultations, as became evident during a telephone communication of the Special UN Secretary-General for the Cyprus Issue, Jane Hall Luth, with the negotiator of the Greek-Cypriot side, Andreas Mavrogiannis. The President of the Republic had the opportunity to present to the Holy Synod the developments of the Cyprus issue and the efforts that the Cypriot Government is making.

In a speech, as a part of a symposium in Izmir, on the “Sea of Islands (meaning the Aegean Sea) and the problems of neighborly relations with Greece,” the occupation leader said games are played in Cyprus and he claimed that Greek-Cypriots are to blame. Ersin Tatar claimed that with the agreements, Cyprus should be transferred to the Ottoman State or to its successor, the Turkish Republic. He also claimed that the only goal of the Greek-Cypriot side is to connect Cyprus with Greece.

The occupying leader said that after his election as “president”, with the full support of Turkey, they shouted with all their might that there could be an agreement in Cyprus with the cooperation of two separate states living side by side, based on sovereign equality, and stressed that it was not possible to accept the federation.

Tatar said they would continue to fight to the end, claiming that there was a Turkish state in the eastern Mediterranean and that it was the “TRNC” (pseudo-state). This state owes its sovereignty and existence to the just struggle of the Turkish people. If there is peace in Cyprus today, it depends on the presence of the Turkish armed forces on the island. Otherwise, the bloodshed will continue again, but there has been peace in Cyprus since 1974. No one is bleeding. Therefore, Turkey’s armed presence must continue.

With information from: CNA, euronews.com, defenceredefined.com.cy