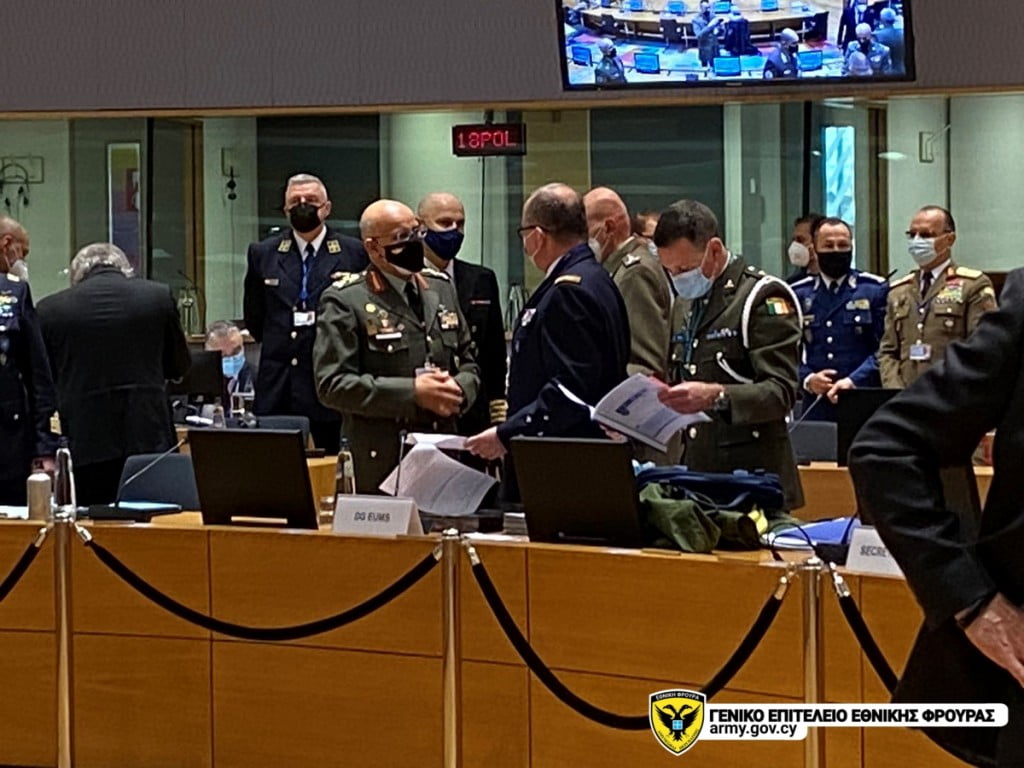 The meeting of the European Union Military Committee (EUMC) took place yesterday, May 19, 2021 in Brussels at the level of the Armed Forces Chiefs of the Member States. The Chief of the National Guard, Lieutenant General Democritus Zervakis, participated in the meeting.

During the meeting, the Chiefs of the Armed Forces of the member-states were informed about the development of the strategic dialogue regarding the introduction of the institutional text of the Strategic Compass focusing on crisis management. An exchange of views was held on the development of the structures of the EU Military Staff (EUMS) and Military Planning and Conduct Capability (MPCC) and the related Command and Control procedures. In addition, issues related to Battle Groups, EU-NATO cooperation and the conduct of EU operations under the EU’s Common Defence and Security Policy (CSDP) were discussed. The Armed Forces Chiefs of the member-states had the opportunity, with their interventions, to express their views on the items on the agenda.

Also read: “TALOS 2021” | The exercise of the Cyprus Air Force against the French Rafale has been completed – Photos

At the beginning of the meeting, the Chairman of the Military Committee, General Claudio Graziano, the High Representative for the Common Foreign and Security Policy, Mr. Josep Borrel,  and the Director General of the EU Military Staff, Rear Admiral Hervé Bléjean expressed their views. In addition, the meeting concluded with the election of the next Chairman of the Military Committee, Chief of the Austrian Armed Forces, General Robert Brieger, who will take office in May 2022.

In particular, the discussion of EU-NATO relations took place in the presence of the President of the NATO Military Committee, Air Chief Marshal Stuard Peach, while the presentation of the issue of EU missions and operations was attended by the Chiefs of Staff of Bosnia and Herzegovina, Georgia, the Republic of Korea, Moldova, Montenegro, the Republic of Northern Macedonia and Serbia.

In his speech on the Compass Strategy, the Chief of the National Guard noted the need to develop crisis management capabilities with the strategic goal of the EU acting as a provider of security in an environment characterized by regional conflicts, instability, growing geopolitical competition and an increasing presence of hybrid threats. To this end, he stressed the need to develop a strategic response, so that the EU has the ability to deal with security challenges and potential crises, both in its periphery and beyond. He noted that the institutional text of the Compass Strategy should provide clear political guidance by adopting a practical and realistic approach to implementing the concept of Strategic Autonomy in order to respond effectively to the security challenges facing the EU. He also referred to the importance of implementing the Mutual Defence Clause of Article 42(7) of the EU Treaty in the event of a crisis, given that one of the main objectives of the Compass Strategy is to strengthen solidarity within the EU. Also, he mentioned the need to enhance operational capabilities in the field of maritime safety. In this context, he said, it is important to have a regional approach and increase the EU presence in the Eastern Mediterranean.

Regarding the EU-NATO relations, the Chief supported the mutual and beneficial cooperation between the EU and NATO, with particular emphasis on the areas of crisis management, military capability development and response to hybrid threats, noting that the reason why cooperation is not promoted is known.

Finally, regarding the development of the EUMS and the MPCC, it was argued that strengthening the Command and Control structures, combined with a common awareness of the situation, is an important process for establishing the EU as an international strategic player.

During the bilateral contacts, views were exchanged on the security situation in the EU region, with the Leader referring to the security challenges in the wider Eastern Mediterranean region, noting the growing concern over the actions of hybrid threats. In particular, with their counterparts from the Netherlands and Serbia, the existing Bilateral Defence Cooperation Program was discussed and ways to further enhance it were considered.

It is worth noting that in the evening of Tuesday May 18, 2021, a joint dinner was hosted by the Chairmen of the EU and NATO Military Committees in the presence of the Chiefs of Staff of the member-states.

Also read: Tripartite meeting of the Defence Ministers of Cyprus-Greece-Egypt to be held tomorrow in Nicosia