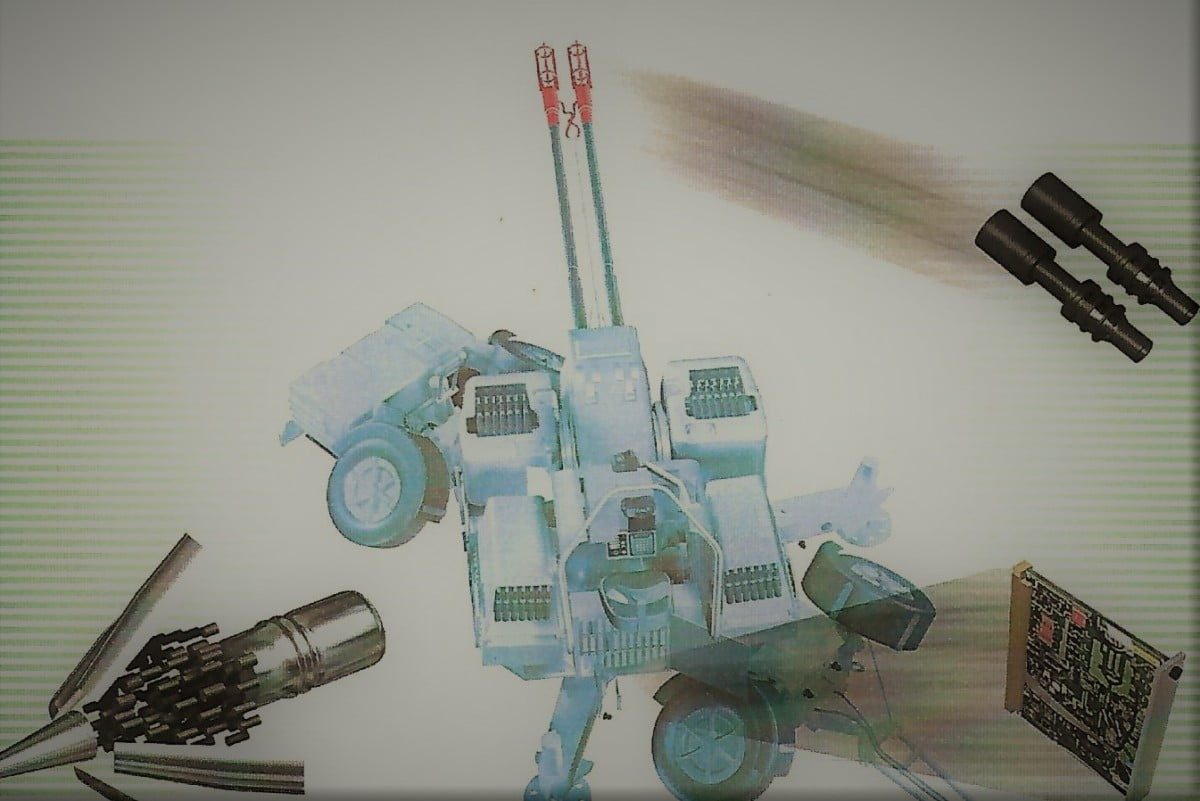 As we informed you in our previous article, the DEFENCE ReDEFiNED team will create a series of editorials to present some proposals, which we believe could help in upgrading the existing weapon systems of the National Guard, and consequently in increasing its deterrent power.

The deterrent power, of course, relies on many factors such as equipment, trained staff and various others that we will not mention at this time. In this article we will focus on the prospect of upgrading a weapon system which has already served for several years in the National Guard and specifically the anti-aircraft system “OTHELLOS”.

The towed short-range anti-aircraft system (SHORAD) “OTHELLOS” (as was named by the National Guard) was the first serious attempt to acquire modern anti-aircraft defence in the early 1990s.

The German group Rheinmetall acquired  the manufacturer of the twin guns and the Skyguard radar, the Swiss Oerlikon Contraves in 1999. To this day, the group continues to produce the GDF cannon (version 009 TREO in progress) and the Skyguard radar (version 3) alongside the latest Skyshield family of air-defence systems.

For users of older versions, including the National Guard, an additional upgrade of the Skyguard family systems is offered.

The main feature of the upgrade offered is the use of Oerlikon Ahead® Air Burst Munition (for GDF-003 and 005 guns) in combination with the new target acquisition and tracking radar which provides a major upgrade of the system capabilities.

Specifically, the 35 mm AHEAD (35mm x 228) ammunition, after being programmed using magnetic induction coils, explodes at a predetermined distance from the target, unleashing 152 tungsten spin-stabilized projectiles to spin towards the path of the target.

The scattering of projectiles creates a dense and lethal “wall” that penetrates  incoming ballistic targets (C-RAM) such as rockets, artillery and mortars, as well as other flying vehicles that fly at low altitudes such as unmanned aerial vehicles and missiles up to 4,000m in range (with an estimated combat range between 3000-3500 meters).

We also note that Rheinmetall Ahead technology can be used in ammunition ranging in calibre from 30mm to 76mm.

The Skyguard radar/fire control unit upgrade gives the ability to detect incoming ballistic threats as well as to use advanced electronic countermeasures (ECCM) with the radar search range still remaining at 20 km.

In addition to the upgrade of the fire control unit, it is possible to integrate new tracking radars in the twin Oerlikon 35mm guns, new optics as well as new remote control devices. Furthermore, a new power supply system generator and a new engine of the Oerlikon gun with reduced thermal trace. 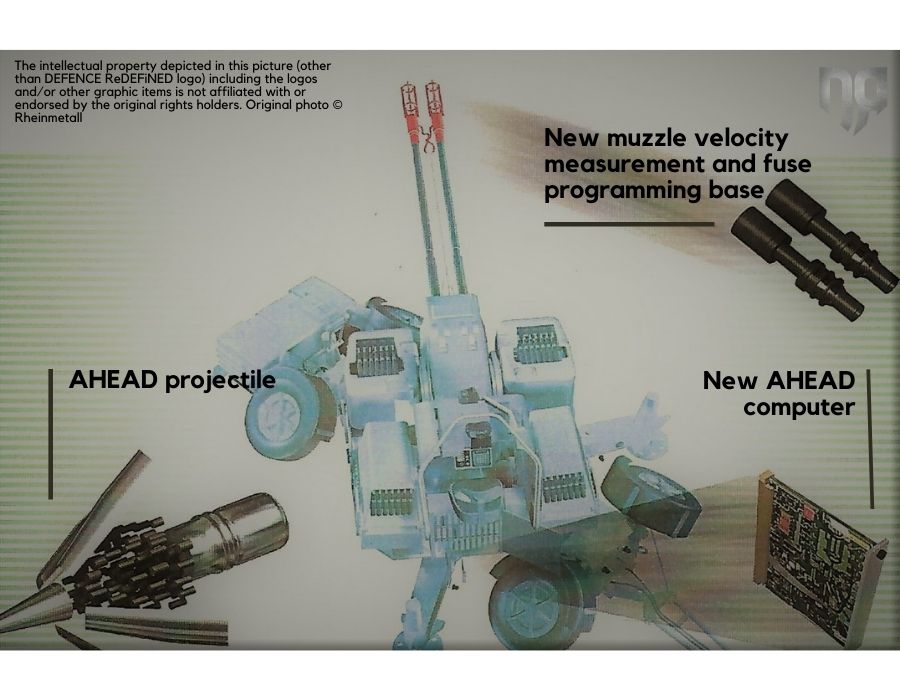 In addition, we mention that Rheinmetall offers integration of the Denel Cheetah C-RAM missile, in Skyguard system for countering saturation attacks at distances up to 10 km. The Cheetah missile will be available in containers of up to 60 missiles. Currently, however, Cheetah is still in the process of development and testing. 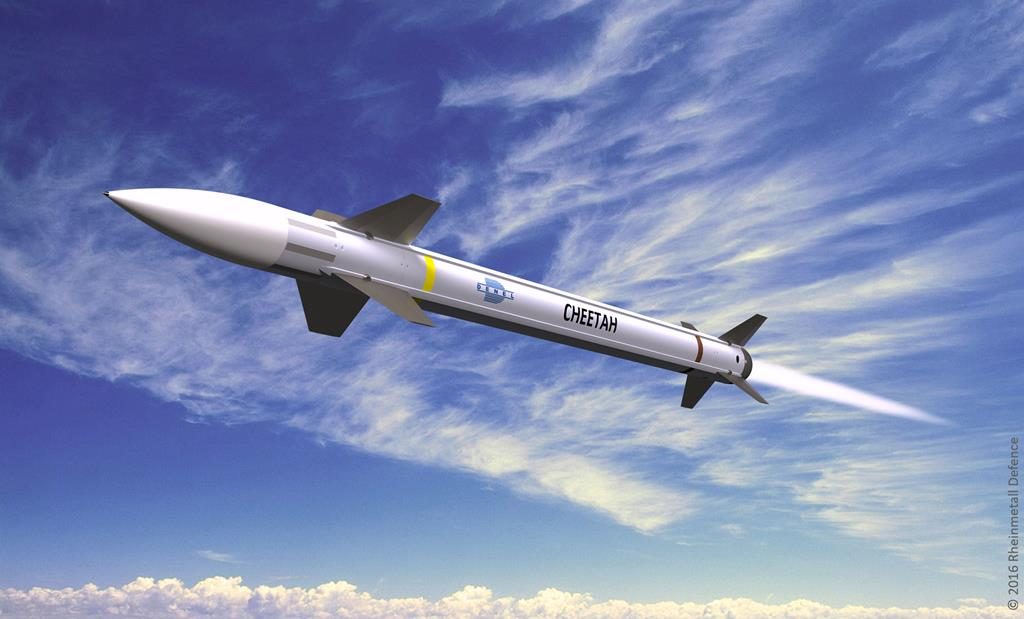 For even greater capabilities Rheinmetall offers the Oerlikon X-TAR3D® tactical acquisition radar mounted on a vehicle. The radar has the ability, amongst others, to detect and track low and very low cross section (RCS) objects like UAVs at distances up to 55 km. 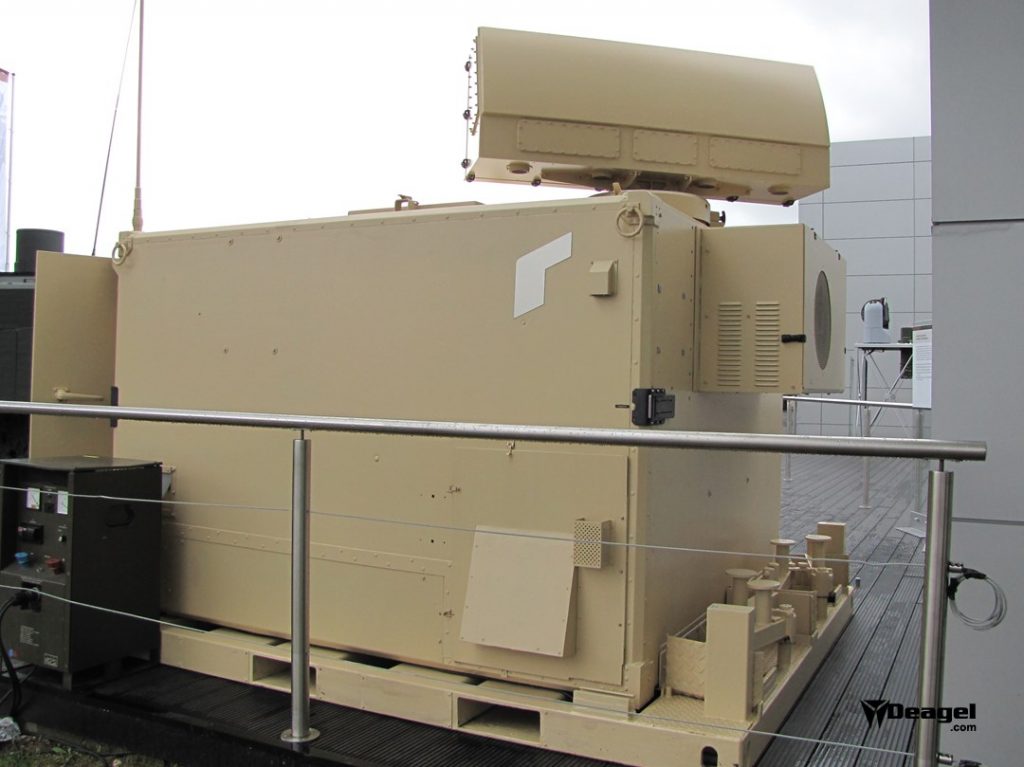 The use of AHEAD munition is a more cost-effective choice compared to anti-ballistic missiles such as the 9M331 missiles of the TOR M1 system (able to perform point defence). Aspide 2000 missiles do not have anti-ballistic protection properties, but they can be used against other flying targets such as helicopters.

In addition to the cost, the number of missiles of the self-propelled anti-aircraft systems of the National Guard (BUK M1-2 and TOR M1) prohibit their usage for countering rockets and short-range missiles (i.e MAM-L) and loitering ammunition, weapons which we have recently seen being used extensively in the Nagorno-Karabakh field.

A possible upgrade of the Oerlikon GDF 003 twin-guns and part of the Skyguard fire control units of the National Guard, according to our exclusive information, ranges between 140-150 million euros. By upgrading the system, in addition to the increased kill probability of the incoming targets, there is significant reduction to the personnel needs. The National Guard, according to information available in open sources, currently has 12 “OTHELLOS” systems. 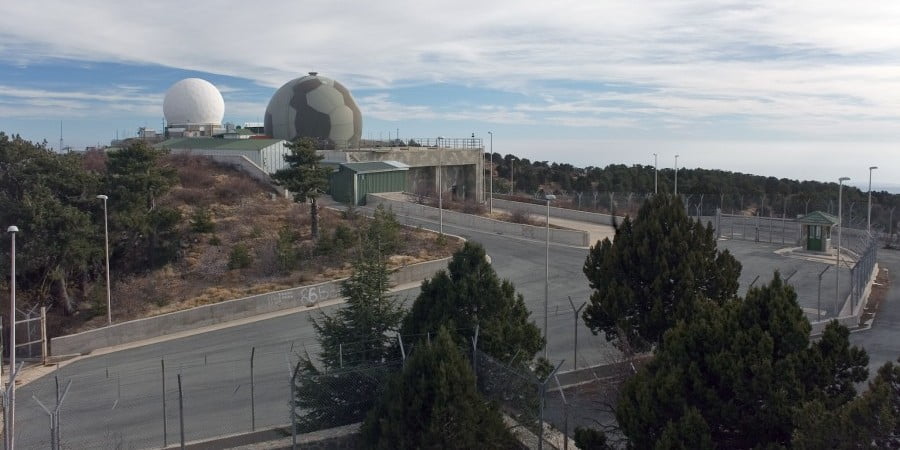 Taking into account the critical infrastructure of the Republic of Cyprus – and strategic targets – such as the two airports (including the air base), the radars in Troodos, the port of Limassol and the naval base along with the Vasilikos power plant, the upgrade of even a number of the available  “OTHELLOS” systems will be able to protect the infrastructure in question.

Other users of the Skyguard and the newer Skyshield systems already use them to protect critical infrastructure as well as their forces on peacekeeping missions. A typical example is Germany which uses the MANTIS (Modular, Automatic and Network-capable Targeting and Interception System) system in Afghanistan with great success.

Despite the “disadvantage” of the static nature of the “OTHELLOS” system, it is estimated that with this upgrade the system will be able to successfully counter all ballistic threats, as described above, even attacks with standoff weapons such as the Popeye missile and the SLAM-ER and SOM cruise missiles available to the Turkish Air Force arsenal. The problem of countering such weapons, of course, should always be done in the context of the broader air defence design.

Additionally, the purchase of newer self-propelled systems such as the Rheinmetall’s Oerlikon Skyranger 35 will cost about twice the money needed for upgrading “OTHELLOS”.

Also, the purchase of TOR M2E, PANTSIR S1 is desirable in order to increase the capabilities of the Cypriot Air Defence; nevertheless, this is impossible -at least in the near future – due to cost, but also serious political pressures that may arise to the detriment of the Republic of Cyprus, from sanctions against Russia coming from the EU and the US.

Indicatively, we note the current pressure on the Republic of Cyprus from the United States to prohibit port calls to Russian warships, as one of the conditions for lifting the US arms embargo. 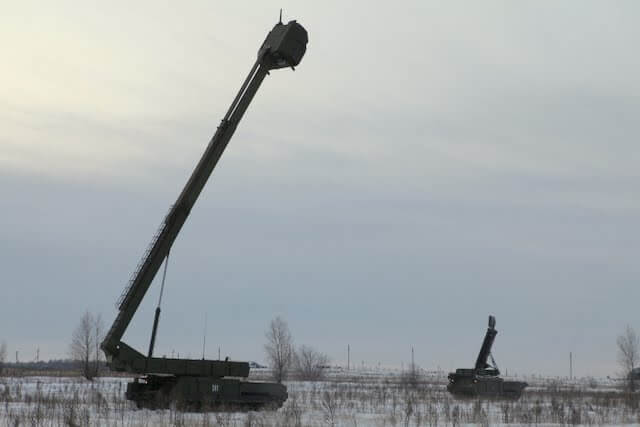 It is also noted that the upgrade of the existing self-propelled BUK M1-2 and TOR M1 systems is not possible for the National Guard given the current situation, since the BUK M2 version includes the addition of new sensors namely the self-propelled 9S-36 radar with a telescopic lift antenna of almost 25 meters height. Also the TOR M1A, M1B, M1V, M1G and M1-2U versions (which include among others software upgrades and replacement of EOS) are unknown if they are available for foreign (other than Russia) users.

Also read: Moscow reacts to US request to Cyprus to deny port access to Russian ships

The Hellenic Air Force (HAF), operates the twin Oerlikon 35mm guns and Skyguard radar in the “VELOS” system for the protection of its airports. HAF has upgraded the system, which was completed in 2016, and currently, according to our information, examines the possible acquisition of AHEAD ammunition, which had not been acquired so far due to cost. Each “VELOS” system consists of:

The appointed officers of the General Staff of the National Guard and the Ministry of Defence of the Republic of Cyprus know exactly what needs to be acquired in terms of armaments (in all the three branches) and we must emphasize that the planning for acquisition, utilization and maintenance of weapons is not a simple process. It requires long-term planning, allocation of available resources according to the hierarchy of needs and finally political will to allocate the necessary funds.

This proposal, as well as the various other substantiated proposals that see the light of day (or otherwise), intend to help in any way possible by providing a broader picture and the potential choices in order to make the best decisions and increase the deterrence ability of the country. The final decision after all does not belong to the experts (military) but to the politicians.

Stay tuned with us for many other interesting topics always presented with the reliability of DEFENCE ReDEFINED.

Also read : Statements by members of the Defence Committee | Cyprus is being equipped – “What is being planned is very good”